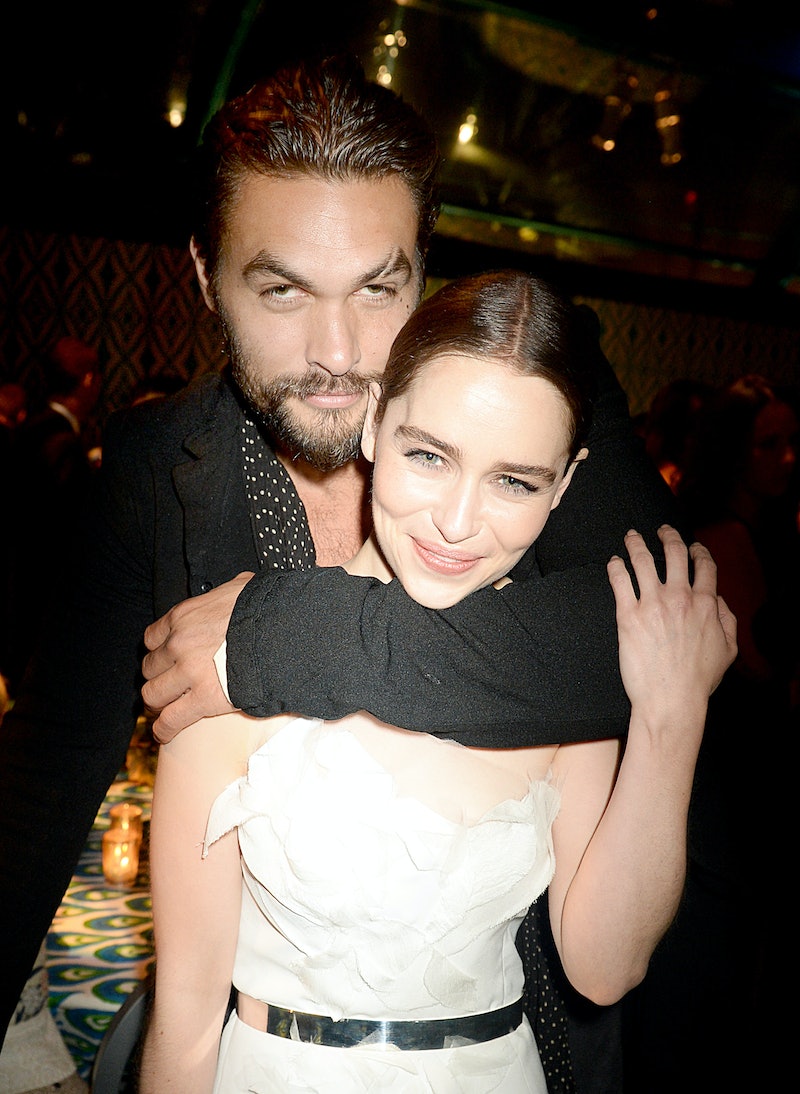 Daenerys Targaryen and Khal Drogo reunited outside of Essos. On Saturday, Aug. 14, former Game of Thrones stars Emilia Clarke and Jason Momoa reunited at a birthday party for the show’s co-creator Dan Benioff. There, the two stars posed for multiple photos together, which they later shared on Instagram alongside sweet captions celebrating their onscreen marriage and real-life friendship.

Clarke shared a photo of Momoa holding her in his arms, writing in the caption, “When your sun and stars rolls into town you check that he can still bench press a Khaleesi.” Momoa commented on the photo, writing, “Love u forever moon of my life” with a string of heart emojis. The Aquaman star also posted photos with Clarke on his Instagram, showing his former co-star sitting on his lap. In the caption, he wrote, “MOON OF MY LIFE. you are wonderful love u forever @emilia_clarke.” He also added a birthday message for Benioff, writing, “Happy birthday benioff you handsome generous badass leo aloha j.”

Peter Dinklage, one of the duo’s former Game of Thrones co-stars, seemed to enjoy the reunion pictures as well, commenting on Clarke’s photo with a fire emoji. Meanwhile, fans were equally stoked to see the two stars reunite, with one commenting, “Mother of dragons meets her husband again,” and another chiming in, “Look at you! How beautiful are you guys? You were my favorite in the series.”

Daenarys Targaryen and Khal Drogo were married on the HBO fantasy drama, and though Momoa’s time on the show was relatively brief, the two stars stayed in touch after working together. In 2019, Momoa — who is married to actor Lisa Bonet — said during an appearance on The Graham Norton Show that he always visits Clarke whenever he visits the United Kingdom, revealing that he’d been planning to attend his former co-star’s birthday party the next day as well. Months earlier, Clarke had made sure to attend his surprise 40th birthday bash. Paying tribute to Momoa on Instagram, she shared a photo of them hugging, captioning it, “With you I feel 2 feet small. X 2 @prideofgypsies HAPPY FREAKING BIRTHDAY BABY!”

The duo has also posted other reunion photos and sweet messages about each other on social media in the past. Earlier in 2019, the Last Christmas star posted a picture with Momoa and GoT co-star Kit Harington, writing, “Reunions never looked this hairy. #anyexcuseforamomoasandwich.”

Both actors speak highly of each other in interviews as well. In August 2019, Momoa praised Clarke after she opened up to Entertainment Tonight about having had a brain aneurysm. “She’s so brave in helping the world and trying to raise awareness,” he said. “I love her to bits and she’s here and she’s going to do great things with it and teach the world.”

As for Clarke, she shared how much she appreciated working with Momoa on the Game of Thrones set during an episode of Armchair Expert with Dax Shepard in November 2019. The future Mother of Madness star said Momoa looked out for her during intimate scenes, as she was only 23 and the show wasn’t working with intimacy coordinators. “He took care of me in an environment where I didn’t know I needed to be taken care of,” Clarke said. “He was so kind and considerate, and cared about me as a human being.”