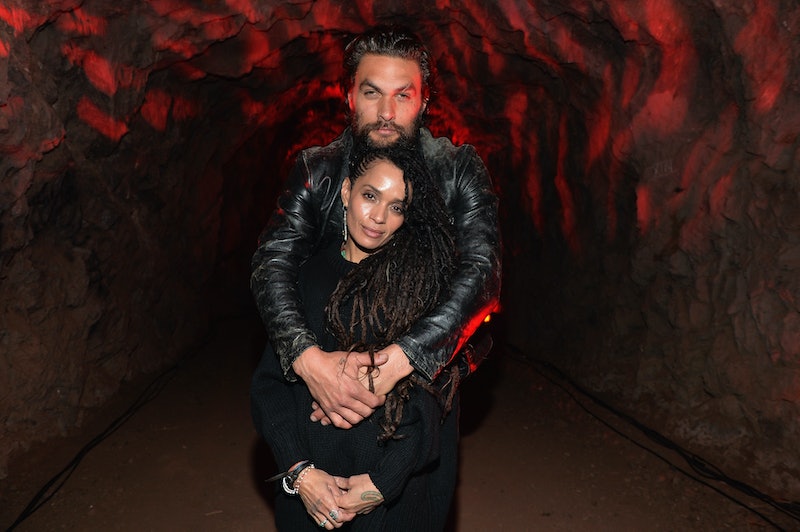 Lisa Bonet and Jason Momoa have dominated television and movie screens with their powerful performances for decades. Along the way to becoming household names, they found love, starting in 2005 with him feeling “f*cking fireworks going off inside” upon meeting her. They eventually married in 2017, and by the end of 2021, the couple became a prime example of a successful Hollywood romance. But their love story came to an end when Bonet and Momoa announced they were separating on Jan. 12, 2022: “We free each other to be who we are learning to become.”

Bonet, the witty and charming Denise Huxtable in The Cosby Show and as the destructive Marisol Campos in Ray Donovan, and Momoa, the cutting Khal Drogo in Game of Thrones and the unstoppable Aquaman, even worked on some projects during their time together. The lovebirds collaborated on The Red Road and Road to Paloma, a 2014 film Momoa wrote, directed, and starred in. Outside of work, they shared a beautiful blended family that includes Bonet’s ex-husband, rock star Lenny Kravitz, and their daughter Zoë Kravitz.

Although Bonet and Momoa initially met at a jazz club in 2005, Momoa revealed that his admiration for Bonet predated that meeting. In fact, she had been his celebrity crush since he was 8. “Ever since I was like 8 years old and I saw her on the TV, I was like, ‘Mommy, I want that one,’” Momoa said on The Late Late Show in 2017. “I was like, ‘I’m going to stalk you for the rest of my life, and I’m going to get you!’ I am a full-fledged stalker.” He admitted, however, that he didn’t tell Bonet of his crush until the couple had their two children so he didn’t look “creepy” or “weird.” He explained: “I’ve always wanted to meet her. She was a queen always.”

But wasn’t just Momoa who held his partner in high regard; Bonet told People in 2008 that Momoa was “the love of [her] life” and that he was “everything [she] hoped would come” in a life partner. “Jason is an alpha male who stands for love and family,” she told Porter in 2018. “[He] embodies a rare form of masculinity in this day and age — he’s a leader; he’s generous. Just in terms of charisma, physique, the right use of power, responsibility, work ethic, you can go down the line.”

Here’s everything you need to know about Lisa Bonet and Jason Momoa’s relationship.

After crushing on Bonet for years through a television screen, Momoa finally met the High Fidelity star at a jazz club in Los Angeles in 2005. Speaking with James Corden on The Late Late Show, Momoa revealed the two met through mutual friends and described their first meeting as being “in the right place at the right time.” He even shared that he took special care of his appearance prior to meeting Bonet to potentially impress her. “I actually had dreaded my hair almost for her,” he told Corden. “I had huge dreadlocks and she had dreadlocks.”

The Aquaman actor said that he felt like he had “f*cking fireworks going off inside” his body after meeting Bonet. “I literally turned around, I was with my best friend, and I see her, and I’m just like,” Momoa explaining, sheepishly shrugging his shoulders. “She goes, you know, ‘I’m Lisa.’ I turned around to my friend and was like, [high-pitched screaming].”

After he convinced her to drive him to his hotel — Momoa didn’t have a car at the time — the two stopped at the 101 Coffee Shop in Los Angeles. When Bonet ordered a Guinness, Momoa knew they were meant to be. “She ordered it. I thought: ‘Oh my God, I can’t believe I’m with a woman who ordered a Guinness. I love her,’” Momoa told Men’s Health. “When I got to know her, she was the woman of my dreams.”

Bonet and Momoa welcomed their first child, daughter Lola Iolani Momoa, in June 2007. A little more than a year later, their son, Nakoa-Wolf Manakauapo Namakaeha Momoa, was born in December 2008. The family maintains a very active lifestyle that Momoa often shares adorable glimpses of online. Whether they’re rock climbing, attending concerts, or riding bikes and throwing axes, they always seem to be on the move.

In addition to the couple’s two children, Momoa also shares a close bond with Zoë, Bonet’s firstborn daughter from her earlier marriage to Lenny. Momoa has shared multiple “papa bear” Instagram posts cheering on the Big Little Lies star, showing support for her magazine covers, her role in Fantastic Beasts, and the news that she had joined him in the DC universe as Catwoman.

Although they divorced in 1993, Kravitz and Bonet share a deep friendship, which has only grown over the years. “Zoe’s mom and I now are best friends,” Kravitz told Oprah’s Master Class in 2013. “It’s interesting because that’s how the relationship started. But it makes you feel really good when you can do that.” Bonet similarly called their relationship “fantastic,” telling Porter that their dynamic was “full-on family love.”

That friendship extends to Bonet’s husband as well, with Kravitz calling Momoa his “brother.” “When we’re all together now — her man, her kids, Zoë, me — we’re all together and we’re one big happy family,” he said. “It’s beautiful and it just shows you what can be done.” The duo even have matching skull jewelry, and Kravitz has a tradition of posting images of him and Momoa as a way to commemorate the Game of Thrones star’s birthday. On Aug. 1, Kravitz shared an image of the duo posing together side by side. “Happy birthday,” the post reads. “I’m proud to call you my brother. One love. One family.” Momoa commented on the post: “love u madly. Mahalo nui loa.”

“People can’t believe how tight Jason and I are, or how tight I still am with Zoë’s mom, how we all relate,” Kravitz told Men’s Health in 2020. “We just do it because that’s what you do. You let love rule, right? I mean, obviously, after a breakup, it’s work—it takes some work and time, healing and reflection, et cetera. But as far as Jason and I? Literally the moment we met, we were like, ‘Oh, yeah. I love this dude.’”

In November 2017, Us Weekly reported that Bonet and Momoa tied the knot in a small ceremony at their Los Angeles home that October. When information about the private event leaked online, Momoa wasn’t pleased to say the least. “I thought it would have stayed that way, but some *sshole leaked it, and I will find you,” he told Entertainment Tonight during a Justice League press junket. “You know what, I’ve been married to my wife for 12 years,” he added, calling the wedding “just a gathering of our families and celebrating our love.”

When asked by about newlywed life on the Justice League red carpet, Momoa and Bonet shared that their relationship felt “different” with their new titles. “I never thought it would,” Momoa told E! News. “We have a 10-and-a-half-year-old, 9-year-old, [I] plan on being with her the rest of my life, but it’s just that moment where [you decide] let’s go to the next level. I’ll be here your whole life.” Bonet shared that calling Momoa her husband didn’t shake her too much, though, adding: “I already thought of him as my husband.”

On Jan. 12, Bonet and Momoa shocked fans when they announced their separation in a joint statement on Instagram, saying they “free each other” from their marriage as a result of the many changes in the world. “We have all felt the squeeze and changes of these transformational times,” they wrote. “A revolution is unfolding and our family is of no exception... feeling and growing from the seismic shifts occurring. So we share our family news that we are parting ways in marriage.”

The couple went on to explain that they didn’t want to make a formal announcement of their split, but did so to avoid further scrutiny. “We share this not because we think it’s noteworthy but so that as we go about our lives we may do so with dignity and honesty,” they explained. “The love between us carries on, evolving in ways it wishes to be known and lived. We free each other to be who we are learning to become.”

Bonet and Momoa concluded their statement with a spiritual poem that makes it clear their top priority is their children, Lola and Nakoa. “Our devotion unwavering to this sacred life & our Children,” they wrote. “Teaching our children what’s possible. Living the prayer. May love prevail.”

Rumors of the couple potentially getting back together emerged on Feb. 28, when an insider told Life & Style Bonet and Momoa “never stopped loving each other and have reconciled.” The Dune actor then attended the premiere of Kravitz’ The Batman with Lola and Nakoa on March 1, and further fueled the rumors during a red carpet interview. “We’re just so proud,” he told Entertainment Tonight. “Lisa couldn’t be here, so we’re representing, me and the babies. We’re just very excited to be here … It’s still family, you know?”

Following the Batman premiere, Momoa took to Instagram to share photos from the event and address the conversation surrounding his split from Bonet. “Mahalo to the fans and press for being generous and giving us space for the children,” he wrote in the March 3 post’s caption. “It’s hard enough separating in the public eye. We appreciate the continued privacy through these times.”

Speaking to Access Hollywood for an interview on the 2022 Oscars red carpet, Momoa officially squashed rumors of a reconciliation between him and Bonet. “We’re not back together. We’re family. … We have two beautiful children together,” he told the outlet on March 27. “We’re not getting back together. We’re family forever.” Elsewhere in the interview, Access hosts Scott Evans and Zuri Hall asked Momoa to choose between multiple pictures of Beyoncé to describe his mood for the evening, and he notably chose an image from the “Single Ladies” music video.