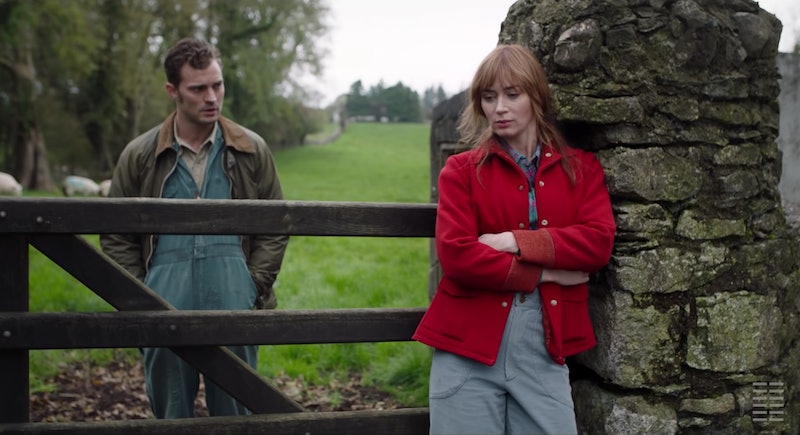 The idea of romancing Christian Grey onscreen might be intimidating for some women, but not all have such issues. In a recent interview with Entertainment Tonight, Emily Blunt said her co-star Jamie Dornan was "relieved" she hadn't seen Fifty Shades of Grey before they began filming the romantic drama Wild Mountain Thyme. In the Irish-set movie, Blunt plays Rosemary Muldoon, an Irish farmer who is hoping to win the heart of her neighbor, Anthony Reilly (Dornan), and help him avoid losing his farm to an American relative.

As they got to know each other ahead of filming, Blunt told Dornan that she had never seen the sexy film trilogy he stars in and even apologized, only to discover he was anything but upset by her admission. "Jamie was quite relieved that I had never seen the Fifty Shades films. And I hadn't read the book," she recalled. "So I just said, 'I'm so sorry. I've never seen those films.' And he goes, 'I am very relieved.'"

While Blunt revealed that she was a fan of Dornan's, they were both ultimately glad that she didn't associate him with his steamy character. "I didn't have any sort of perception of him being this ... you know, whatever Christian Grey was," Blunt said. "Anthony is so the antithesis of [Christian Grey], and actually Jamie is the antithesis of that character," she explained, before joking, "Basically, what I'm alluding to is Jamie has zero game whatsoever."

Dornan has long been open about his complicated relationship with the Fifty Shades of Grey franchise and the character that turned him into an international sex symbol, telling Deadline in 2018 that he's worried fans will never be able to separate him from Christian. "I struggle with that [association]," he said. "I might be fighting this my entire career. I hope not. You just want to keep trying to improve yourself and better yourself."

Around the same time, Dornan told Vulture that he "probably won't" ever take on a similar role in the future. "To speak for myself, and I'll speak for Dakota [Johnson] as well, it's another job on another set. I probably won't ever take a job with this much attention and scrutiny and public opinion directed at it again," the actor explained. "And that's fine! From a practical point of view, you just move on to the next and keep your head down. But listen, it's given us so much. The work that I've been doing has been a million miles from that, and not even by choice. You just keep plugging away, doing good work, and trying to better yourself."

Dornan even compared his post-Fifty Shades career to that of Robert Pattinson, who played Edward Cullen in the Twilight franchise (which infamously inspired Fifty Shades of Grey). "Rob’s a friend of mine, and I have nothing but respect for him in the way he’s done that, knocking out a David Cronenberg movie and doing all of this really obscure stuff," he told Variety in November. "If there’s an opportunity to show what I can do in a different world, in a franchise that has a different audience than what Fifty Shades was, then I’d be crazy to not consider that."

Ultimately, though, Dornan is grateful for all of the opportunities that have come as a result of the Fifty Shades series. "It was mad, a mad thing to be involved in," he told Vulture about making the trilogy. "It was so big in its scale and the reception, and it remains beloved to many people. As a life experience, I’m glad I could go through it. ... It was a strange time, but without that, I don’t get to do Anthropoid, I don’t get to do A Private War, you get the idea."

More like this
Everything You Need To Know About ‘Black Panther: Wakanda Forever’
By Bustle Editors and Radhika Menon
Jamie Foxx Revealed The Question That Got Cameron Diaz To “Un-Retire”
By Grace Wehniainen
Before 'Bullet Train,' Revisit These Brad Pitt 'Fight Club' Premiere Photos From 1999
By Grace Wehniainen
What Is Brad Pitt’s Net Worth? The Bullet Train Star Now Makes 8 Figures Per Film
By Hugh McIntyre
Get Even More From Bustle — Sign Up For The Newsletter