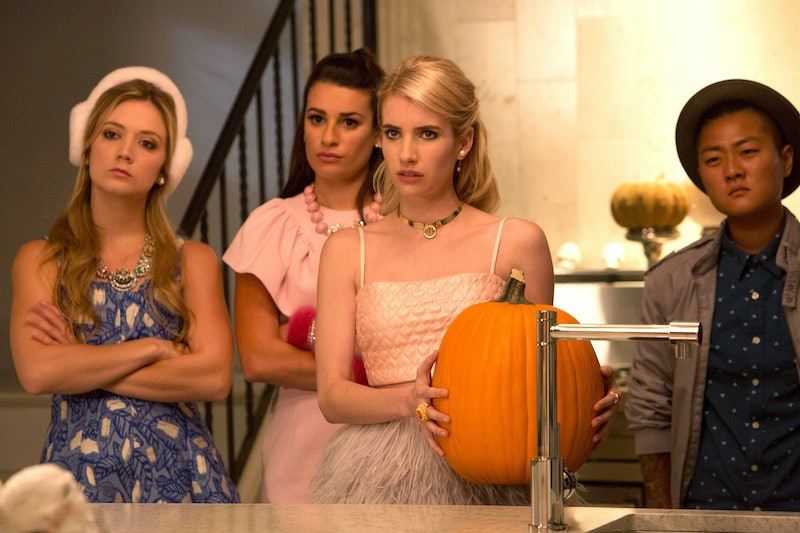 The Chanels couldn't have seen this coming: Emma Roberts and her Scream Queens co-stars Lea Michele and Billie Lourd are all having baby boys at the same time. Roberts opened up about the crazy coincidence on Oct. 21, joking it was "pure witchcraft" in an interview with SiriusXM. "I don't know how else to explain it, it was not planned," she said.

Although their simultaneous pregnancies weren't deliberate, Roberts couldn't be happier that she had her former co-stars to lean on, knowing they were all going through it together. "It's been really amazing to have support being pregnant during this time and to have it be people I'm so close to, it's been amazing," she added. "We couldn't have planned it better, honestly."

The actor also admitted she was glad to find out that her, Michele, and Lourd were all having boys; not only can they grow up together, but Roberts said she would be "scared" of having little Chanels running around. "It would be mini Scream Queens," she said, laughing. "I don't think the world's ready for that. So I'm grateful that we were all given boys. Although, who knows, they could be Scream Queens, we don't know yet."

Roberts confirmed that she and boyfriend Garrett Hedlund were expecting their first child back on Aug. 30, posting a subtle, yet clever gender reveal on Instagram. "Me... and my two favorite guys," she wrote, captioning snapshots of her and Hedlund cradling her baby bump.

However, the Unfabulous star didn't reveal the news herself. Her mother Kelly Cunningham accidentally spilled the beans on Instagram by thanking fans for their pregnancy wishes, causing Roberts to block her on Instagram. "It was my only weapon," she said on the Oct. 19 episode of Jimmy Kimmel Live. "She texted me at 2 a.m., 'Queen, did you block me? Sad face.' I was like, 'Yes, I did block you.' Then I unblocked her. It's been an Instagram war with my mother that I never saw coming."

Michele announced that she was pregnant with her first child back in May. The Glee star and husband Zandy Reich welcomed their baby boy on Aug. 20, with People confirming that the couple named their newborn Ever Leo Reich. Lourd, who did not announce her pregnancy in advance, surprised fans on Sept. 25 by revealing that she had given birth to a baby boy, her first child with fiancé Austen Rydell. Their newborn's name, Kingston Fisher Lourd Rydell, is a tribute to Lourd's late mother Carrie Fisher, who died in 2016.