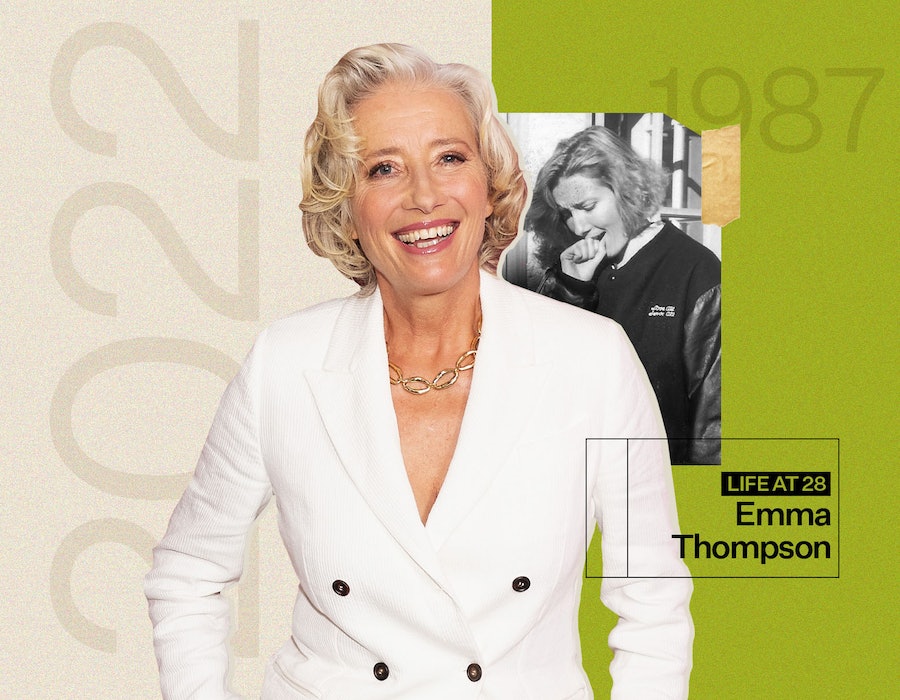 “Talking about sex is always completely fascinating,” Emma Thompson tells me. “It’s my favourite topic of conversation.” The celebrated actor is refreshingly candid as she discusses the themes uncovered in her new film, Good Luck To You, Leo Grande. A tender tale about sexual exploration, female pleasure, and human connection, the drama sees Thompson star as widow Nancy Stokes. The sixty-something retired teacher has only had one sexual partner in her lifetime, her husband, and she has never had an orgasm. In an effort to rectify that, she employs the services of a twenty-something male escort who goes by the name of Leo Grande, portrayed by Peaky Blinders’ Daryl McCormack. And so an unexpected and, at times, conflicted journey begins for the two of them.

In a nation that’s notorious for adopting a stiff upper lip, I ask Thompson if she’s ever felt awkward when discussing sex in the public sphere. “I think it takes a while [not to], but the more we have conversations that aren’t sniggery, the easier it gets,” she muses. “Consider how obsessed we are with other pleasures of the body, such as eating, and how long we spend talking about food. There’s no reason for us not to investigate sexual pleasure much more deeply.”

The term national treasure is often thrown around rather generously but, in this case, you’d be hard pushed to find someone who doesn’t consider Thompson to be one. And it seems the Queen is in agreement, as she awarded the actor a damehood in her 2018 birthday honours.

Born and raised in London,Thompson rose to prominence in the early ‘80s, appearing in numerous comedy and sketch shows. But her pivotal year arrived when she was 28 years old, when she took home the TV BAFTA for Best Actress for her roles in Tutti Frutti and Fortune of War, the latter of which she appeared alongside her future husband, Kenneth Branagh.

Thompson, who has two grown children, Gaia and Tindyebwa, with her husband of 19 years Greg Wise, continued to build an unrivalled career for herself. Her performances in Sense and Sensibility, which earned her a Best Actress Oscar nomination, and everybody’s favourite holiday film, Love Actually are particular highlights. And Thompson found herself introduced to a whole new generation when she took on the role of the grim-obsessed Professor Trelawney in the Harry Potter film franchise, making her first appearance in Prisoner of Azkaban.

Now, Thompson has taken on a role like none other, baring both soul and body in her new film. It’s a story that found the actor at the right time in her life, she tells me. Interestingly, Thompson feels it’s a tale the world is now in a good position to hear. “This story wouldn’t have landed in the way that it has if it had been released before the Me Too movement, and before the mainstream conversation included all these things that have been happening to women,” she remarks.

On the outside, it could appear as though Thompson has always had it all figured out, especially when she was a BAFTA-winning 28 year old rising through the ranks of Britain’s most esteemed acting talents. But she’s quick to dispel any notion that her life has ever been perfect. In 1982, tragedy struck her family when her dad, actor and stage director Eric Thompson, died aged 53. It was something she was, understandably, still processing as she navigated her late 20s. She was also suffering with a crippling body dysmorphia. “As I talk about it [being 28], I feel that sense of promise, but there’s also pressure,” she notes.

Below, the actor talks about being in love with Kenneth Branagh, experiencing the agony of heartbreak, and the one thing she’d change if she could go back in time.

I’m a born and bred Londoner. At that time, I was living in my beloved deceased great uncle’s flat. It was a bedsit, but really nice. It was on the same street that I have lived on all my life. I’m still based there.

At 28, you won a TV BAFTA for Best Actress. Take me back to that special moment.

I remember that night very well. It was really good fun. I was there for two projects, so I had two tables to sit on, which was a little bit tricky, actually.

I think Princess Anne was there. The French were there, too. Actor Daniel Auteuil was getting an award [for period film Jean de Florette]. I was really taken by Auteuil, and I wanted to speak to him, but he had absolutely no interest whatsoever. He cast me aside like an empty can of beer.

But that night was incredibly important for me. I felt that I was in the right profession. I thought, “Well, I must be getting something right.” I think for young people to get awards like that is a very encouraging thing.

What was your view on love and relationships at 28?

I was in love with Ken [Kenneth Branagh], but I don’t think it was going very well, as far as I can remember. We did get married when I was thirty, but I think [1987] might have been a bit of a bad time.

I still felt quite romantically inclined about relationships, which I now realise is completely delusional. I wasn’t thinking about having children at the time. Instead, I was thinking, “What shall I do next? What shall I write?”

The great joy of getting older, and learning as much as you can about your emotional life, is coming to a point where you’re not, as it were, at the mercy of your emotions.

There’s a beautiful moment at the end of Good Luck To You Leo Grande, where a newly body confident Nancy stands naked in front of the mirror and studies her image. At 28, what was your relationship like with your body?

Oh, it was completely f*cked up. It was much worse than it is now. I lost confidence in my body in my early teens. I was surrounded by iconography that suggested to me, very forcibly, carving messages in my brain that have never been removed, that I could never have a nice enough body. That I’d never be thin or pretty enough. I felt that my shape, and everything, was wrong. I was saddled with that [thought process] from very early on, as were most of my friends.

It’s a great, great shame. It’s a waste of time, energy, money, passion, and purpose. When I think of the waste, I wish that I had found a way to escape from that earlier. I now know that I never will. I’ll die with it, and that’s that.

Looking back, do you think you were emotionally fulfilled at 28?

I probably didn’t know enough about myself to be very skillful with my emotions, which may have meant that I suffered unnecessarily. I think that the great joy of getting older, and learning as much as you can about your emotional life, is coming to a point where you’re not, as it were, at the mercy of your emotions. They will show you no quarter, and unless you know how to navigate them, you’re not going to have a very good time.

That is a place that would be nice to get to sooner rather than later. I could have done with a little bit more therapy, probably.

It was quite eclectic, but basically anything I could dance to. My great hero was David Bowie. I liked Paul Weller, The Clash, and some punk music, too.

Yes, absolutely! “Ladies of the Canyon” [1970] was a very seminal record for me.

What social issues were you passionate about back then?

The same ones I’m passionate about now. All women’s rights. By that time, I’d met my human rights mentor, Helen Bamber. She led me into the world of Freedom From Torture [a charity] and working against human trafficking. I was active on lots of political fronts at that age.

Had you experienced serious heartbreak at 28?

I’d had my heart broken properly twice by then. It was so painful: absolute agony. My grandmother used to say: “Your heart is no good unless it’s been broken at least 10 times.” I wonder if that’s true. I think it [heartbreak] does make you very compassionate, because it makes you so vulnerable.

You think, “I’ll never be the same again.” And perhaps you won’t, as you learn something when you experience something so intense.

If you could go back in time and visit your 28-year-old self, what advice would you give her?

Stick to your guns and don’t be frightened.

What, if anything, was holding you back at 28?

The usual things. The fact that I was female and, like it or not, we just weren’t taken as seriously. When talking to young women, I often say that the highway for men is really well signed and, based on that signage, they can make decisions about where they might want to go next.

Whereas for women, it’s more like a mountain gorge with a poorly marked path, strewn with various obstacles that you have to actually climb over. And to do that, you’ll have to put things down, things that you might need later on, and leave them. You really have to find your own way.

I was extremely fortunate because I had older men in my life, who championed women. I don’t think I would have necessarily had the opportunities that I did, had I not met those people. That was partly the great privilege of having gone to a posh university [Newnham College, Cambridge], because you get into contact with folk like that. It’s not automatic for women.

Are you still in touch with any of your social circle from that time?

My friends are some of the greatest joys of my life. And I’m good at friendship. You can’t just assume people are going to hang about if you don’t continue to show an interest.

You are a role model to many. Tell me, who was your role model when you were 28?

I loved and adored Lily Tomlin. She and Jane Wagner [now Tomlin’s wife] had produced a show called The Search for Signs of Intelligent Life in the Universe. Presumably in response to the fact that there didn’t appear to be many signs of intelligent life on the planet. They were really bright with the sketches they created. Tomlin was funny and clever, and played all of these characters. I wanted to be her.

My mother was also a role model for me. She worked throughout my childhood and I’m very grateful that she did, because that was a good example for me.

If you could go back and change anything from that year, what would it be?

There were a couple of outfits that were ill-judged [laughs]. But I think I’d stop dieting. I would absolutely try to defuse this body dysmorphia thing, and really focus on it. It’s regrettable and tragic how much time I spent worrying about that. I’d like to repurpose that energy elsewhere.