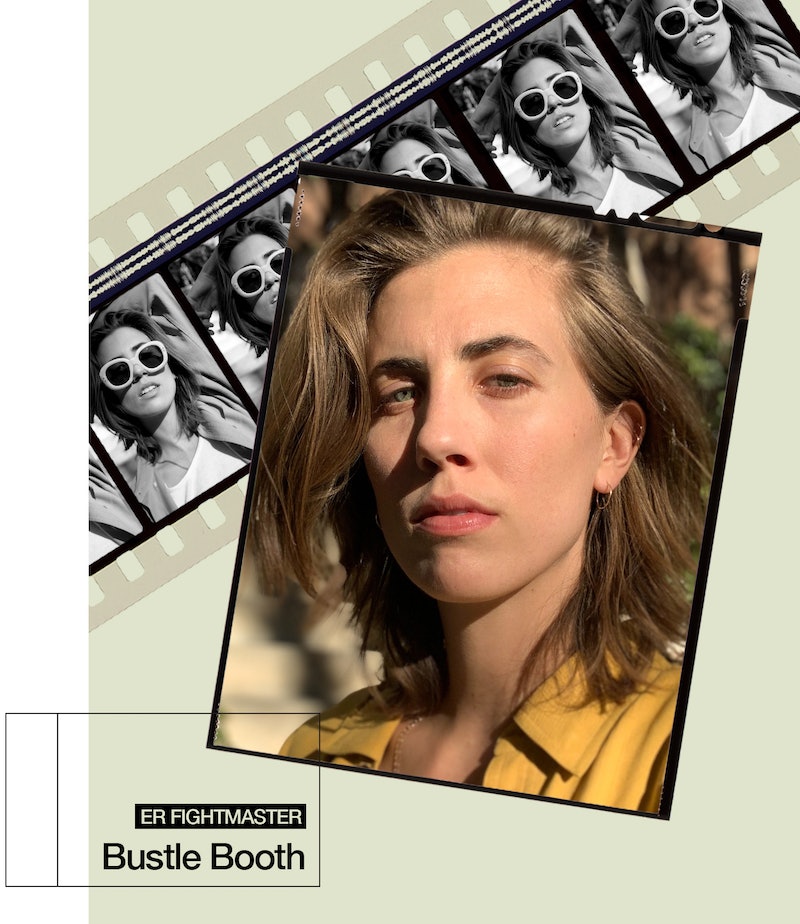 When E.R. Fightmaster was cast as Grey’s Anatomy’s first non-binary doctor Kai, they were excited to take on a role that allowed them to fulfill their childhood dream. Growing up in Cincinnati, they didn’t see queer relationships on TV or in real life, so they made it their goal to be the “queer person onscreen.” But they were equally thrilled to get to “pretend to be good at science” — never their strongest subject in school.

“I was good at anatomy, but that’s because my anatomy teacher had a British accent, and she was kind of a bad b*tch,” Fightmaster, 29, tells Bustle. When they booked their role on Grey’s, they immediately called their mom, who holds a PhD, to say, “Haha, me too.”

After performing and touring with Chicago’s Second City improv troupe, Fightmaster broke out on Hulu’s Shrill as Fran’s partner Em, another role that allowed them to live out their goal of playing queer characters. With Grey’s in particular, Fightmaster is proud that Kai hasn’t had to explicitly state their gender identity. “That’s so important to me, that someone would be able to watch the show and see that non-binary doesn’t always have to be this huge discussion,” the actor says. “Treating Kai being non-binary as just another acceptable identity … is revolutionary on its own.”

It’s been personally affirming for Fightmaster, too. “When I looked at the script, I understood that this character was non-binary right away,” they add. “To get in the room and not have to think about my gender while I’m acting is a gift. I had that when I was working on Shrill, and to be able to do it on Grey’s is this affirmation that I think I needed — that I will be able to be a non-binary person who’s living my gender onscreen almost as an afterthought, so I get to just act like everybody else does.”

On Grey’s, that’s meant drawing out romantic tension between Kai and Amelia (Caterina Scorsone), who’s fresh off of a complicated breakup with Link. Fightmaster isn’t allowed to say much about how the two’s relationship will unfold, but like many Grey’s fans, they’re definitely shipping the maybe-couple. When asked what Kai’s theme song should be, they offer a telling answer: “F*ck the Pain Away” by Peaches. “Now I’m wondering if this answer will get me in trouble,” Fightmaster laughs. “But I think it would be an appropriate song.”

Get to know more about Fightmaster in their Bustle Booth questionnaire below.

Am I feeling fun? Matcha latte. Serious? Iced Americano with a splash of oat.

Literally cannot think of a single line from a movie except Ewan McGregor in Moulin Rouge! screaming “Satine!”

First love was Arthur. Second love was Hey Arnold! I know she’s supposedly str8 but I stand firm in my belief that Helga Pataki is queer representation.

More like this
'That '90s Show' Star Callie Haverda Got Advice From Mila Kunis & Ashton Kutcher
By Brad Witter
Keyla Monterroso Mejia Is Finally The Star Of The Show
By Gabrielle Bondi
At 28, Rosie Perez Risked Her Career To Stop Playing Stereotypes
By Gabrielle Bondi
At 28, Debra Jo Rupp Was Living A Much Different '70s Show
By Grace Wehniainen
Get Even More From Bustle — Sign Up For The Newsletter
From hair trends to relationship advice, our daily newsletter has everything you need to sound like a person who’s on TikTok, even if you aren’t.