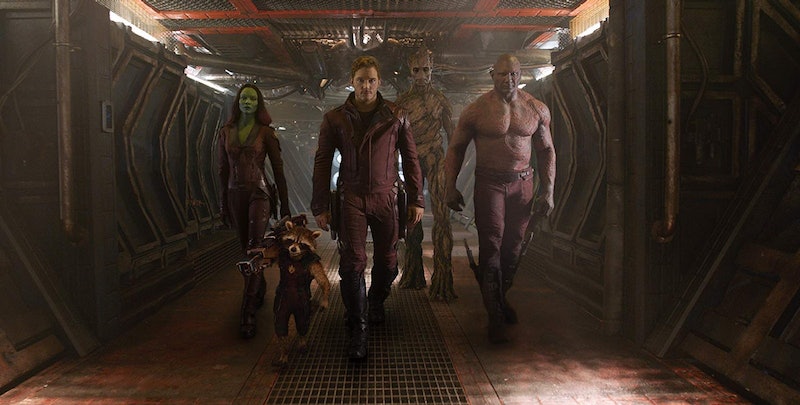 The moment Redbone’s “Come and Get Your Love” started blasting in the first few minutes of Guardians of the Galaxy, cueing rhythmic hip thrusts from Peter Quill, aka Star-Lord (Chris Pratt), Marvel fans knew they were in for a musical treat (aside from a comedic sci-fi romp, of course). As Peter’s band of criminals-turned-intergalactic heroes attempted to save the galaxy from total destruction, hits from decades past soundtracked the two-hour film.

Director James Gunn, the creative force behind the music selections of the first two films, returns to the franchise for the highly-anticipated Guardians of the Galaxy Vol. 3. With the third film set to premiere in May 2023, fans eagerly await what’s next for the (mostly) extraterrestrial Guardians as they rescue one of their own, as well as the music they’ll do all this, well, guarding to. Here’s everything to know about the Guardians of the Galaxy Vol. 3 soundtrack, including what genres the playlist will likely draw from and the special 64-song playlist curated by the director himself.

Gunn has carved out a name for himself as somewhat of a music connoisseur, so he will definitely take the reins again in the third film’s music choices. (Even when he briefly joined DC to direct The Suicide Squad, his ability to match sequences with chart-topping songs was on full display.)

Of his creative process for the first film, Gunn told Vulture that he began by downloading “a few hundred” songs from ’70s Billboard charts and listening to them “around the house.” He added, “Sometimes I would be inspired to create a scene around a song, and other times I had a scene that needed music and I would listen through the playlist, visualizing various songs, figuring out which would work the best.”

When a fan asked Gunn on Twitter last May whether he had already started a soundtrack, Gunn revealed the music was nailed down months ahead of filming. “Soundtrack is finished. Movie starts shooting end of the year,” he replied. Last November, another asked Gunn about the film’s soundtrack, writing, “Have you chosen your sound track for gotg 3 yet?” To which Gunn responded, “For years.”

Guardians Of The Galaxy Vol. 3 Soundtrack Songs And Genres

As in the first two films, expect the music — or at least the device on which it’s played — to be central to the plot. In the first film, music helped couch Peter’s origin story. After his mother Meredith’s death, Peter was abducted, and the last items he had that belonged to her were her cassette mixtapes. (So, the entire soundtrack is essentially Meredith’s playlist.) The genre choices were also propelled by the plot. Since Peter was abducted in the ’80s, the film’s playlist was relegated to hits from the ’70s. In the second film, music also punctuated pivotal moments in Peter and Gamora’s relationship. (Remember their slow dance to Sam Cooke’s “Bring It Home to Me”?)

In Avengers: Infinity War, Gamora is supposedly murdered by her adoptive father and major MCU villain Thanos. Toward the end of the film, Peter seemed dead set on finding a past version of her that could still be alive. Marvel fans have since speculated that Guardians of the Galaxy Vol. 3’s plot will center on Peter’s quest.

As to what genres and decades the music will be drawn from for the next film, fans have some theories. In a Reddit thread dedicated to speculations on the film’s soundtrack, a shrewd user pointed out, “I think Peter getting the Zune at the end of guardians 2 implies he could have music up to the mid 2000s. No longer limited by when he was abducted.” (If you’ll recall, at the end of the second film, Peter picks up another device with about 300 songs on it. So that definitely expands his pop music selections to beyond the ’70s.)

Another pointed out that since Peter and his crew went back to Earth in Infinity War and hung out with his Earth-based contemporaries, he could have been introduced to more modern hits. “They also hung around earth for Tony’s funeral, so he could really have anything,” one user commented. Fans have tried getting more details from Gunn, but he hasn’t spilled yet.

While there’s no official soundtrack yet, don’t fret — there is a playlist to tide us all over. In April 2020, as the pandemic began ravaging the world, Gunn curated a gratuitous mix of 64 songs on Spotify titled “Meredith Quill’s Complete Awesome Mix.” On the streaming app, Gunn revealed the songs are “part of the master list of Meredith Quill’s favorite songs” that he considered for Guardians of the Galaxy Vol. 1 and 2. Among them are “Heart of Glass” by Blondie, “I Feel the Earth Move” by Carole King, and “Lovely Day” by Bill Withers. Can any of them show up in the next film? Maybe. “I’m not promising I won’t use these in future films, but I feel we could all deal with a little joy during our time in quarantine,” he wrote.