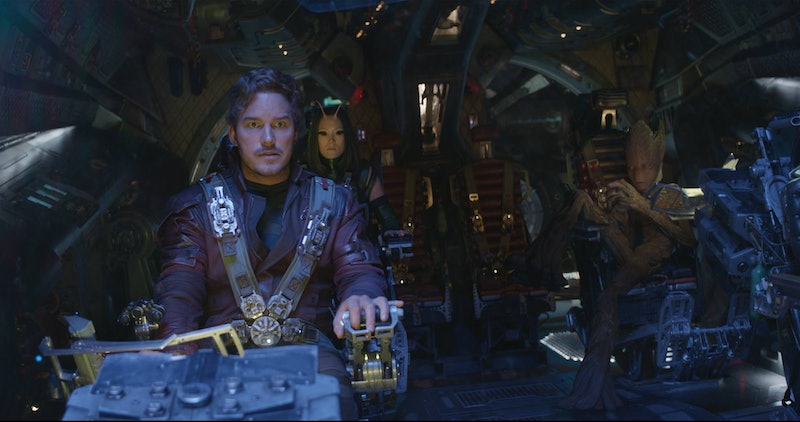 There are some very pressing issues in the Marvel Cinematic Universe right now: Is Spider-Man going to be OK? Just how dangerous is this Multiverse we’re dealing with? Of course, that hasn’t stopped fans from looking ahead to one of Phase 4’s later releases, Guardians of the Galaxy Vol. 3, which premieres in 2023.

The last time we checked in with the Guardians (or, as Thor might put it, Asgardians) of the Galaxy, they were heading back into space after the events of Endgame. In a blink-and-you-miss-it moment, Peter Quill, aka Star-Lord, can be seen searching for Gamora on his ship’s computer system. Even though the Gamora he knew was almost definitively killed by Thanos, the 2014 iteration of her character is apparently still out there. The quest to find her could be part of Vol. 3’s narrative.

If nearly two years seems way too long of a wait to see your favorite found family again, you’re in luck — the Guardians will actually appear in the MCU much sooner than 2023. Set photos seemingly confirmed that Quill, Nebula, and co. would appear in Thor: Love and Thunder, which premieres on May 6, 2022. There’s also an upcoming Guardians of the Galaxy Holiday Special releasing on Disney+ later that year, promising some “spirited shenanigans” for the group, per Marvel. Last but certainly not least, there’s a series of shorts for Baby Groot on the way, too.

But naturally, you can probably expect most of the major drama to go down in the official sequel. As you wait for the group’s next appearance, here is everything to know about Guardians of the Galaxy Vol. 3, including insights on the potential death of a key character.

Guardians Of The Galaxy Vol. 3 Cast

One exciting addition to the Guardians of the Galaxy Vol. 3 cast was announced on Oct. 11. Will Poulter, who recently starred in Midsommar, will be playing Adam Warlock in Vol. 3, Deadline reported. We first got a hint of Adam in a Vol. 2 post-credits scene in which Ayesha introduced him as a new weapon against the heroes: “The next step in our evolution — more powerful, more beautiful, more capable of destroying the Guardians of the Galaxy.” Adam was still gestating at that time, but Poulter’s casting seems to confirm the figure will finally be unleashed soon.

Whether he’s a villain or not, though, is a question for later. In the Marvel Comics, he didn’t exactly love that he was created for nefarious reasons and actually lashed out at the scientists who made him.

As for the rest of the crew, you can expect to see your favorite heroes return: Star-Lord (Chris Pratt), Mantis (Pom Klementieff), Nebula (Karen Gillan), Drax (Dave Bautista), Rocket (Bradley Cooper), and Groot (Vin Diesel). And of course, even though Gamora isn’t quite a Guardian right now, you can probably plan to see Zoe Saldana reprise her role in Vol. 3, too.

Pratt revealed on Jimmy Kimmel Live that filming would likely begin later this year, and Gillan told Collider in July that Vol. 3 was writer-director James Gunn’s “strongest work yet.” Speaking of how she read the script with Klementieff, Gillan said, “We both cried and laughed, but there was full tears ... It’s brilliant and it’s emotional and it’s funny and it’s all of those things that you want.”

Guardians Of The Galaxy Vol. 3 Plot

It’s hard to predict the plot of a movie that comes out in two years, especially when it follows harrowing threats like Spider-Man: No Way Home’s Multiversal mayhem or Kang the Conqueror in Ant-Man and the Wasp: Quantumania. While there’s no way to know what the MCU will look like in 2023, it seems the search for Gamora may play into the plot. In a happy birthday post to Saldana, Gunn said he “can’t wait to see you very soon,” possibly acknowledging the actor’s return.

Saldana has some ideas for how her return might play out. “There’s a part of me that wants her to go back, find her way back to the Guardians,” she said at 2019’s ACE Comic Con. “But there’s also a part of me that wants to explore a bad Gamora ... she’s considered the most lethal assassin, the most lethal woman in the galaxy, so I would want to see what that wrath looks like.”

Who Will Die In Guardians Of The Galaxy Vol. 3?

Fans have reason to worry about the fate of their favorite Guardians. When comparing his MCU work to DC’s The Suicide Squad, Gunn acknowledged that his galactic heroes have generally fared well survival-wise — for now. “We know most of them are gonna make it out alive... at least for two movies,” he told Entertainment Tonight. As Comic Book pointed out last April, Gunn also straight-up said “yes” when a fan asked via Instagram Story if someone would die in Guardians of the Galaxy Vol. 3. Granted, plenty of people (and aliens and androids) die in MCU films — there’s a lot of fighting!

Whether or not Gunn meant a main character would die, of course, remains to be seen. But other comments from his ET interview definitely don’t help and point to a sense of finality for Vol. 3. “I see it as being my last Guardians movie,” he said. “I know Dave [Bautista] sees it as being his last Guardians movie. And Dave and I are pretty much attached at the hip on those projects, so I don't see me going on and doing any more after that.”

Bautista has been vocal about his plans to stop playing Drax after Vol. 3, so Drax’s death feels likely. Or, for a less fatal outcome, perhaps he bows out and becomes a pacifist, as Drax did in a recent comic run.

According to Screen Rant, a popular fan theory posits that the color of each Guardians installment’s title corresponds to the character who dies in that film. The first film had a tan logo, and Groot sacrificed himself — the second, a bright blue, and Yondu did the same. By that logic, the third film’s textured, bluish-gray title could point to the end of Drax, or even Rocket (just take a look at his armor). As Inverse reported, a “messy” comic book continuity has seen several Guardians die in print, including Star-Lord, Drax, Groot, and Rocket. In one recent comic, the latter two besties even died together, so anything is possible at this point.

Guardians Of The Galaxy Vol. 3 Soundtrack

From “Come and Get Your Love” to “Mr. Blue Sky,” the Guardians films have delivered some of the MCU’s most epic musical moments. Naturally, there’s more to come in Vol. 3. Gunn hasn’t teased which artists we can expect to hear, but he did confirm via Twitter that the soundtrack was finished this summer.

Wondering when you’ll finally get to add another Awesome Mix to your Spotify? Guardians of the Galaxy Vol. 3 will premiere on May 5, 2023.

Guardians Of The Galaxy Vol. 3 Trailer

Given the film’s late premiere date, we likely won’t be seeing a trailer for quite some time. Fortunately, the Guardians’ appearance in Thor: Love and Thunder and the upcoming holiday special should hold you over until then.

This post will be updated with the trailer and additional plot details as more information on Guardians of the Galaxy Vol. 3 becomes available.