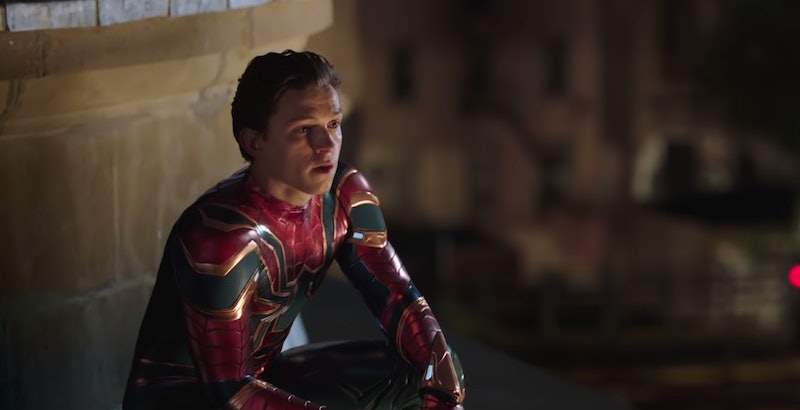 If you were able to make it through Infinity War's "I don't feel so good" scene and Tony Stark's death in Endgame, you've lived through the toughest parts of the MCU's snap. But did you ever think about how the Avengers snap affected your favorite characters, aside from the big deaths and the time traveling? Like, when Thanos got rid of half of all living things, did he actually mean all living things — plants and microorganisms included? Or what happened to people in aircrafts and cars who were snapped? The major domino effect of the snap was devastating, and just because the Avengers reversed it, bringing everyone back, doesn't mean it was super simple either. But don't worry, it seems like most were brought back safe and sound. Spoilers for Spider-Man: Far From Home ahead.

In a new interview with Variety, the Far From Home writers, Chris McKenna and Erik Sommers, said they sat down with Amy Pascal, Jon Watts, and others who were involved with Marvel's lore and talked through what would have happened when the snap was reversed. For instance, people in planes were thousands of miles in the air, but when they snapped back into existence, would they fall to their doom since the aircraft isn't in that position anymore?

"We were told that when Bruce [Banner] brings everyone back that he accounted for that, that was part of his wish," McKenna said. "Everyone came back safe and sound. We don’t have to worry about people falling out of the skies." That's good to know, but apparently that rule didn't apply to the marching band that blipped out of existence and were then trampled by the basketball team when they came back in Far From Home. Maybe everyone came back as "safe and sound" as they could, considering the circumstances.

And they didn't stop there. They also shared that "half of all living things" did literally mean all living things. "All life forms [disappeared]," Mckenna said. "Even down to the bacteria in your digestive system. We were wondering if we could make a whole plot point about people's digestive systems that were really screwed up." That's just cruel of Thanos, causing bowel problems in addition to killing off loved ones. It also kind of insinuates that Thanos' plan was flawed, since the whole point of getting rid of half the world was essentially to solve a resource problem. But if half of all livestock, plants, and other renewable, living resources were knocked off the planet, the ratio would have stayed the same, not really helping the problem he was trying to solve in the first place. But, Thanos was evil, not necessarily smart.

Regardless, it doesn't really matter since the Blip lasted five years, and now everyone's back. Far From Home was a great way for the writers and Marvel to show those repercussions in a humorous way, through teens' eyes. "Because Peter is a hero on the ground level, we wanted to see everything in the most trying part of a person’s life in a way which is high school," McKenna said. "We really wanted to get into the nitty-gritty of it all, but in the most fun and the most realistic way to deal with these great cosmic things that happened in the previous movies."

Peter Parker and Co. handled the fallout of the Blip pretty well, but after the massive reveal of his identity to the public thanks to Quentin Beck and J. Jonah Jameson, there are more things to deal with in the future.