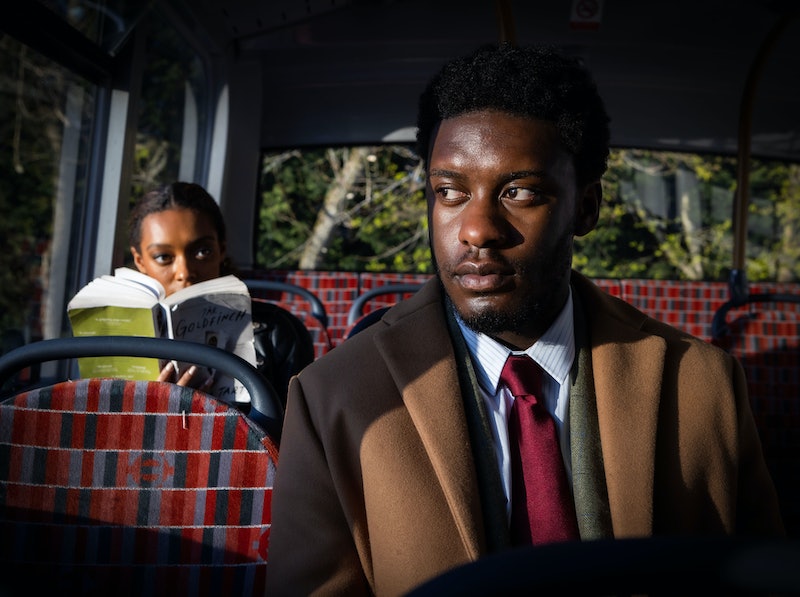 The BBC is back with a gripping new-mini series, You Don’t Know Me. The four-part drama is an adaptation of 2017 novel by barrister Imran Mahmood of the same name, and was inspired by his 25 years of court experience. In an interview with The Guardian, Mahmood said the novel’s voice comes from a mixture of his clients: “It’s an alloy, an amalgam of the people I speak to,” It was was shortlisted for a Glass Bell Award in 2018.

You Don’t Know Me was adapted by screenwriter Tom Edge, known for Lovesick, Vigil and Strike. As the novel takes the form of a long speech given to a jury, translating it to screen was tricky, as Edge explained in an interview with the BBC: “The challenge of taking a picture painted in words, a long speech given to the jury, and finding out how to render that in the form of a drama. To ensure it is as immersive when it's done in sound and pictures, as it is when it's unfolding in your head.”

He added: “There are constant layers of questioning. And while it's for the audience to decipher who this protagonist is, he is also attempting to discover the truth of the people around him and the people he has loved. I thought it was beautifully rendered and that formed the core of the approach, really bringing out those elements to the fore.”

Snowed-In Productions previously produced Mrs Wilson with Ruth Wilson for BBC One and ITV mini-series Too Close starring Emily Watson and Denise Gough. It is currently filming The Midwich Cuckoos with co-producers Route24 for Sky.

In a BBC interview, producer Jules Hussey said the show is there to challenge audiences' perceptions: “I think they need to come away thinking, 'I shouldn't make assumptions about people'. It's not always what you think. Just stop and question your assumptions.”

Hussey advises viewers “Don't jump to conclusions. Just stop and think. You might be right, but actually you're probably going to be wrong. Or you won't know the full picture until you've watched all four episodes.”

What Is The Plot Of You Don’t Know Me?

The BBC teases that the drama “centres on a young man, who, with overwhelming evidence against him, stands accused of murder. At his trial, Hero tells an extraordinary story. It is about the woman he loves, Kyra, who got into dangerous trouble. It’s about how he risked everything to save her. He swears he’s innocent. But in the end, all that matters is this: do you believe him?"

The main character, aptly-named Hero is played by Samuel Adewunmi. He’s young man from South London in the dock for murder who decides he wants to tell his own story in his own words, rather than the one his barrister decided was in his best interests. He exercises his right to present his own closing speech and what follows is an interrogation of the criminal justice system and an invitation to see beyond divisions.

Who Is In The Cast Of You Don’t Know Me?

When Will You Don’t Know Me Air?

There are four 60 minute episodes of You Don’t Know Me. The first will air on BBC One on Sunday, Dec. 5 at 9 p.m., with the second episode airing at the same time the following day. The third episode will be out on Sunday, Dec. 12, with the fourth and final part airing on Monday, Dec. 13 both at 9 p.m.

How can I watch You Don’t Know Me?

If you’re itching to watch the mini-series back to back, you can. The entire series will be available on BBC iPlayer following the first episode on Dec. 5.

And if you’re outside the UK, the show will be heading to Netflix not too long after its UK release.

Is There A Trailer For You Don’t Know Me?

The official trailer, which is available to watch on YouTube, teases a seriously dramatic and tense series.

More like this
Everything To Know About The 'Daisy Jones & The Six' TV Series
By Maxine Harrison and Brad Witter
'Succession' Season 4 Will Be An "Absolute Banger" According To Cousin Greg
By Bustle Staff
Con O'Neill Was Connected With Sarah Lancashire Long Before 'Happy Valley'
By El Hunt
'The Catch' Revisits A Famed Irish Filming Spot From 'The Tudors'
By Darshita Goyal
Get The Very Best Of Bustle/UK
Sign up for Bustle UK's twice-weekly newsletter, featuring the latest must-watch TV, moving personal stories, and expert advice on the hottest viral buys.