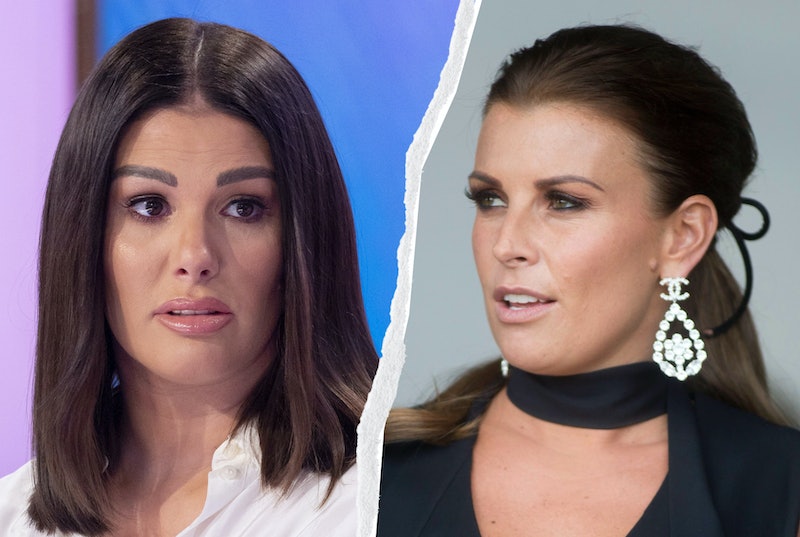 When Coleen Rooney publicly accused Rebekah Vardy of selling stories about her to the press back in October 2019, she sent the internet into a tailspin. Via a bombshell social media statement, Rooney, 33, ignited the now infamous "WAGatha Christie" debate with four simple words and a supersized ellipsis: "It's ..........Rebekah Vardy's account." Despite the media furore, Vardy has vehemently denied all accusations and, in June 2020, the WAGatha Christie feud officially reached the courts. And the drama is... intense. Here are the key developments you need to know about.

The scandal first came to light when Rooney claimed to have set a trap to discover who was leaking the private information she shared among friends and family on a closed Instagram account. "After a long time of trying to figure out who it could be, for various reasons, I had a suspicion,” she wrote.

The caption read "This has been a burden in my life for a few years now and finally I have got to the bottom of it......"

Within a matter of days, the post had amassed hundreds of thousands of likes and comments and had made national headlines.

In response to Rooney's claims, Vardy wrote: "I'm not being funny but I don't need the money, what would I gain from selling stories on you?” She added: "I liked you a lot Coleen & I'm so upset that you have chosen to do this."

The mum of five later revealed she was taken to hospital three times while pregnant as she suffered anxiety attacks over the spat, reports The Sun.

In May, The Sun reported that the two women and their legal teams attempted to sort the issue out via a Zoom arbitration meeting, but things ended in "deadlock."

With no resolution, the case was taken to London's High Court after Vardy launched libel proceedings against Rooney in June.

The court case started on Nov. 19 with a preliminary hearing. During the hearing, Justice Warby, who is presiding over the case, was asked to determine the “natural and ordinary” meaning of Rooney’s Instagram posts, which accused Vardy of leaking stories.

Vardy’s lawyers argued that the meaning was that she had “consistently and repeatedly betrayed the defendant’s trust over several years by leaking the defendant’s private and personal Instagram posts and stories for publication in The Sun."

Vardy's lawyers also stated that, as a result of Rooney’s posts, their client experienced so much stress she feared she would lose her baby, and that she continued "to suffer severe and extreme hostility and abuse as a result of the post," especially on social media.

Rooney’s team argued that Vardy "was in fact responsible for consistently passing on information about the defendant’s private Instagram posts and stories to The Sun."

Rooney also alleged "this was part of the [Vardy’s] established history and habitual practice of providing private information to journalists and the press."

During the conclusion of the preliminary hearing, Justice Warby ruled in favour or Vardy. He said that Rooney's post in October 2019 had directed guilt at Vardy, meaning her and her legal team would need to prove that it was in fact Vardy who was leaking stories to the press.

The case became more complex on Dec. 13 when court documents revealed that Rooney was accusing Vardy of setting up paparazzi photos with other WAGs for money.

Legal papers sent to the High Court said that Vardy “insisted” that the other wives and girlfriends of some of England’s 2018 World Cup team had pictures taken outside a restaurant in St Petersburg. Rooney alleged that Vardy “worked with a number of agencies to bolster her public persona.” Vardy denied this.

On Jan. 2, 2021, there was another development, with Vardy’s lawyers claiming Rooney did not write the sensationalist post alone.

Per The Sun, new legal papers claim Rooney had help from "third parties" including lawyers who looked over “various drafts” before they were posted to her social media channels.

"It is inferred that the defendant had assistance from third parties in preparing the post and that various drafts were prepared in advance," reads the document, via The Sun.

Vardy’s legal team also questioned whether Rooney’s investigation was thorough and if she considered the leaks came from her own entourage or her husband's entourage before she made the allegations public.

They added: "The defendant’s ‘careful investigation’ lasted for five weeks and one day, not the five months referred to in the post and did not involve any investigation into other sources of the 'leaks.'"

They also argue that Rooney "reached a (false) conclusion" on a "flawed investigation," adding that the defendant |rushed to publication without properly considering the evidence or making any further inquiry."

And so the bitter legal battle rages on. As of July 7, Rebecca Vardy’s legal team have successfully argued for certain aspects of Coleen Rooney’s defence to be ruled out after they were deemed “irrelevant”.

The judge dismissed Rooney’s claim that Vardy was “publicity seeking” when choosing to sit behind Rooney during the 2016 European Championships game “to guarantee her appearance in the media”. Per The Evening Standard, Mrs Justice Steyn said that “the fact that a person seeks media coverage of their own attendance at a football match” does not mean that they are more likely to “disclose private information about another person to the press.”

Rebekah Vardy's lawyers previously argued that the authorship of the Sun's column, The Secret Wag, was not relevant to the trial. And while Mrs Justice Steyn threw out an allegation that Vardy was leaking information on the libel case itself to the newspaper, she ruled that the alleged close relationship between Vardy and the newspaper will still be considered as was "one of the building blocks" of Coleen Rooney's case. (Rooney’s lawyers argue that it shows a "history and practice of publicly disclosing private information about other people she was friendly or associated with," per BBC News.)

Meanwhile Vardy’s legal team, per Evening Standard, argue Rooney “has gone through the claimant’s appearances in the newspapers, put two and two together and made seven.” Vardy's bid for a summary judgment – a legal step which would effectively resolve the case without the need for a trial – was also dismissed, so the legal dispute will continue to play out in court.

The latest in terms of the trial saw Vardy ordered to pay £10,500 towards her rival’s legal fees on Jul.15, 2021. The next court date will be in September, where the case will continue on.

In the meantime however, both women have been involved in making social media comments that some have perceived as digs against one another. Days after Vardy was ordered to pay the £10k legal fee, she appeared to call out Rooney on Instagram. Posting about a recent trip to the zoo she took, in which she agreed to let photos be taken with her children, Vardy wrote:

“I got invited by @zsllondonzoo to come and spend the day with my kids in return for some pictures which of course I didn’t mind doing! Businesses like this thrive off PR especially after the couple of years we have had with COVID.

“I don’t lie about set up pictures (unlike some) everyone does it…. and just for anyone wondering I didn’t make any financial gain off any of the pictures taken.”

A friend then wrote: “Yes Bex I saw this and thought exactly the same,” to which Vardy responded “Maybe I should start doing fake coffee run pics,” which is thought to be in reference to Rooney, who is often spotted grabbing a coffee from high street chains.

Unfortunately the comment did not go down well, with Rooney later taking to Twitter to write “AS IF!!!” along with three emojis: a coffee cup, a running lady, and a laughing face.

The trial will continue in September.