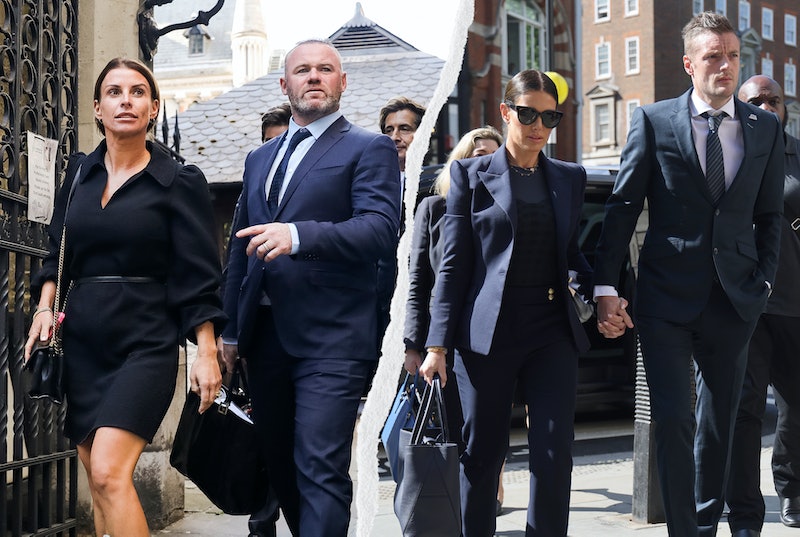 Libel, expensive tailoring, a leopard print notebook, and a phone that holds key evidence languishing at the bottom of The North Sea... The Rooney v Vardy trial has all the makings of a moodily-lit crime drama. (And it still could be, but that is a different story...) As everyone favourite farce comes ever closer to an end, there is much to reflect on – not least the most outrageous twists and turns of the WAGatha Christie trial itself.

Of course, it all started with with that post: “It’s....... Rebecca Vardy’s account.” Coleen Rooney’s suspicion that a close friend or family member was leaking information about her to the press drove her into the sting operation we are all now familiar with. By posting false stories on her private Instagram account and limiting the number of people who could see them, she came to the conclusion that it was Vardy who was the leak, earning the moniker of WAGatha Christie in the process.

So how are we now in court? Vardy vehemently denied – and continues to deny – that she leaked the stories, and after Rooney refused to take the post down, Vardy sued her for libel. Much more happened in between – which you can catch up on here – but then it came to the High Court edition of Baden-Baden, and the OMG moments came in thick and fast. From mysteriously deleted WhatsApp messages to pigeons, here are some of the absolute finest (and by that I do mean wildest) moments from the WAGatha Christie trial.

On Day One, Peter Andre – and his, er, manhood – found himself the unhappy topic of conversation. In a 2004 News Of The World article, Vardy compared Andre’s “trouser equipment” to a “miniature chipolata.” The High Court heard that Vardy regretted the comparison and had been forced to make the statement in the article by her husband at the time, as reported by the Guardian. In case you were curious, Andre himself has previously compared his equipment to objects before. Not a chipolata, mind, but to a Sky+ remote control.

“Who Is Davy Jones?”

Let’s just say Vardy’s obviously not a fan of Pirates Of The Caribbean. The almost comical question – “Who is Davy Jones?” – came when Rooney’s barrister, David Sherborne, remarked that the phone with the potential answers to this entire case was now “in Davy Jones’ locker.” (For context, he was referring to Caroline Watt’s phone. Vardy’s agent reportedly lost said mobile at sea, when the boat she was on during a trip in Scotland encountered choppy waters, sending her phone plummeting to the depts of the North Sea.)

Beyond the octopus-faced villain and captain of the franchise’s Flying Dutchman, the phrase ‘Davy Jones’ locker’ is also an idiom that simply means “at the bottom of the sea.” Now there’s a conversation starter for your next dating app match.

Vardy wasn’t the only one that needed a reference explained to her. Slang, it seems, does not translate to the High Court. Vardy was asked to explain exactly what the acronym FFS means, per the Daily Mail. Followed by an explanation of OMG, too. If Adele’s named one of her songs after the abbreviation, surely that means it’s earned its place in dictionaries nationwide?

Given the time, effort, and money that has gone into this fantastic feud, it was rather surprising to learn that Rooney tried to put a stop to court proceeding. Per the Daily Mail, Rooney tried to reach settlements in May and October 2020, and January 2021.

Rooney’s witness statement (via the Sun) read: “I would like to highlight at the outset that I have sought to resolve this matter amicably on various occasions. I was of the view that the time, money, resources and efforts involved could be better spent elsewhere, particularly in light of the pandemic.However, the efforts I made were all in vain.”

“I should, however, highlight that those attempts to compromise this dispute were not made due to any concern with the underlying merits or an absence of confidence in my position. I was seeking to be pragmatic and to consider the bigger picture in order to enable both parties to move on with our respective lives.”

Yes, pigeons. Referring to evidence pertaining to an interview Vardy gave the Daily Mail in 2019 following that IG post, Sherborne presented Vardy’s quote in the High Court: “Arguing with Coleen is like arguing with a pigeon. You can tell it that you are right and it is wrong but it’s still going to s*** in your hair.” The chaos!

In response, Vardy told the court she "wasn't thinking straight" at the time of the interview. “Rightly or wrongly, maybe that interview shouldn't have been done," she said on Day Three of the court trial. "I don't know. At the time I was speaking to Miss Boshoff [from the Daily Mail] I didn’t know what to think, I didn't know what to believe and that's what I thought had happened.”

Three simple words with so much depth. When asked for more details of a picture taken at the 2018 World Cup, Vardy replied: “If I'm completely honest I had been drinking quite a bit,” as reported by the Guardian. Sherbourne’s reply is the real zinger, though. “I would hope you’re honest because you’re sitting in a witness box.” As they say in football: Vardy 0, Sherbourne 1.

Sherborne also accused Vardy of having “selective amnesia”, which she denied.

Before Wayne Rooney even took the stand, Vardy’s barrister Hugh Tomlinson QC was already throwing shade. On Day Four, when Coleen Rooney said she believed Vardy to be the source of the leaks, Tomlinson responded with “You might believe Derby County might win the Premiership in two years’ time. It’s not evidence is it?” Wayne reportedly didn’t even flinch.

As with any good episodic legal drama, there’s a lot of money involved. Legal fees for both Vardy and Rooney will reportedly start at £1 million, according to the BBC, with fees rising by £500 every minute. Any damages awarded will cover £15,000 to £40,000, and even the “winner” will only have 70% of their legal bill covered. But, with a reported net worth of £120 million, this bill is a drop in the ocean for Wayne and Coleen Rooney. (Or a drop in the North Sea?)

On Day Five of court proceedings, Wayne Rooney told the court that then England manager Roy Hodgson and then assistant Gary Neville asked him to “have a word” with Jamie Vardy.

Rooney’s reply: "No, she wasn't, as far as I'm aware.” But he claimed there had been negative media coverage relating to her Euro 2016 column in the Sun. Much like his wife, Rooney also claimed that he and the former England player and Leicester City striker were not friends “on a social level.”

Vardy went on to release a statement (most unusual given he hasn’t been called as a witness) to deny Rooney’s comments. "Wayne is talking nonsense."