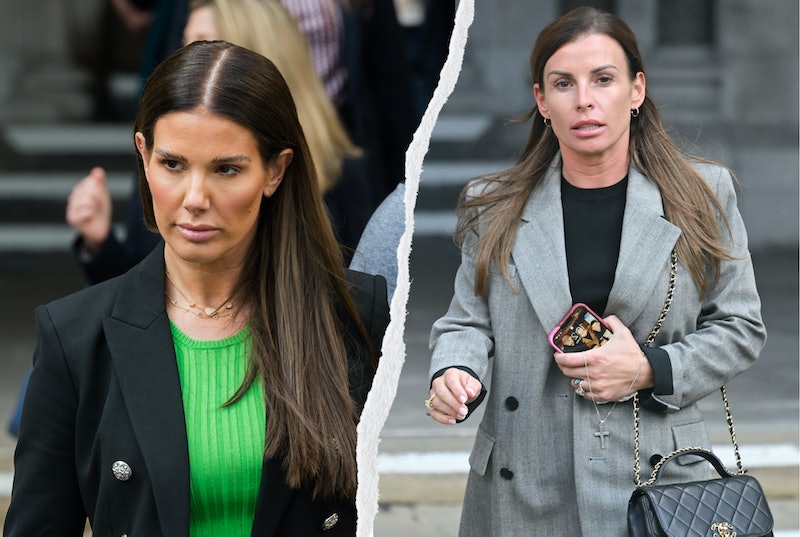 At long last, the announcement we all suspected has been confirmed: WAGatha Christie trial is coming back into our lives, this time as a Channel 4 drama series titled Vardy v Rooney: A Courtroom Drama. To quickly recap, the WAGatha Christie case involved Coleen Rooney and Rebekah Vardy, where Rooney publicly accused of Vardy of leaking personal information about her to the press. Vardy denied these claims and after Rooney refused to take down her accusatory post, she took Rooney to court, suing her for libel. The libel trial cost at least £2 million, per the Daily Mail, and took the internet by storm with some calling it the “libel trial of the century.” And now, Channel 4 — along with the production company Chalkboard — is bringing the case back to the forefront as the broadcaster is working on producing a dramatised series about the case. So, here’s everything to know about Vardy v Rooney: A Courtroom Drama so far.

As it’s still very early days, casting is still yet to be announced for the upcoming drama. Bustle has reached out to Channel 4 for more details and we will update accordingly. However, what we do know is that the series is expected to feature main characters in the form of Coleen Rooney and husband Wayne Rooney, and Rebekah Vardy and husband Jamie Vardy.

The WAGatha Christie drama is set to televise the High Court case of Rooney and Vardy over a 2019 social media post that accused Vardy of leaking Rooney’s private information. The Instagram posts leaked included Rooney’s baby gender selection clinic in Mexico, her planned return to TV, as well as her flooded basement in her mansion. Vardy v Rooney: A Courtroom Drama is set to be a two-part dramatic reconstruction using verbatim court transcripts.

According to a Channel 4 press release, the director of Vardy v Rooney: A Courtroom Drama, Oonagh Kearney, said: “This trial utterly captivated the public with its daily feed of entertaining exchanges and jaw-dropping reveals. But behind this, is a story of two women under constant public scrutiny, fighting for their reputations.”

Chalkboard’s creative director Tom Popay added: “The court case… captivated the entire nation but very few people actually got to see what happened inside the courtroom. We’re excited to bring the trial to life in such a unique way and we’re hoping we can get to the bottom of how this case fascinated and amazed so many.”

As you’d probably expect, a release date also hasn’t been announced yet, but we’ll be sure to update this piece once more details are confirmed.