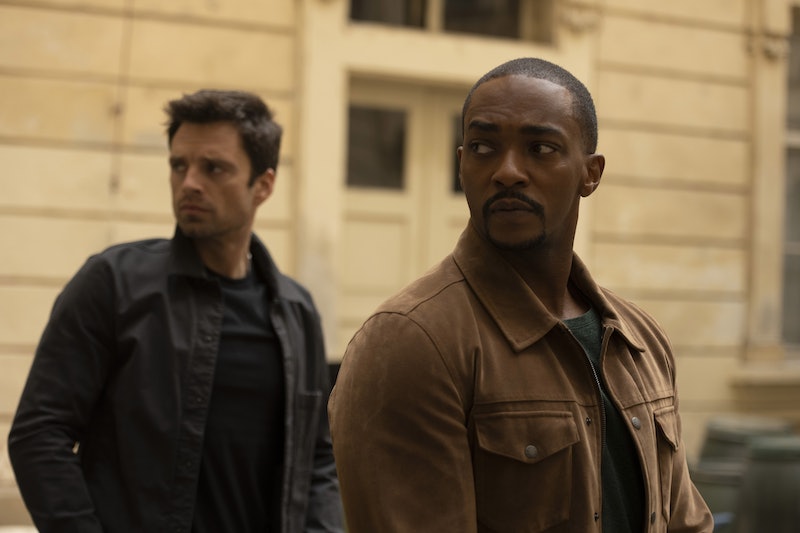 Now that The Falcon and The Winter Soldier is halfway through its first season, fans are deep into piecing together how Sam Wilson and Bucky Barnes’ story will end. The show has introduced quite a few threads within the last few weeks, including Sam’s hesitancy to take on the Captain America mantle, Bucky’s possible continued loyalty to Wakanda, and the reveal of what former S.H.I.E.L.D. agent Sharon Carter has been up to since she was last seen in Captain America: Civil War. We’ve also met three different kinds of antagonists in Karli Morgenthau, Baron Zemo, and even John Walker.

The series isn’t as much of a puzzle box as Disney+ first Marvel installment, WandaVision, but the interweaving plots have led to numerous Falcon and The Winter Soldier theories about where the show intends to go. Let’s break down the most popular ones.

One of the major questions in Falcon and the Winter Soldier is whether or not Sam will actually become Captain America. It’s increasingly looking like the answer is no, as he’s confronted by racism at every turn. After surrendering the shield to the Smithsonian museum, it was immediately handed off to the aggressive (and white) John Walker to become the new Captain America — which Sam only learned about while watching TV. He later met Isaiah Bradley, the first Black super soldier who the CIA secretly experimented on and imprisoned. On top of that, Sam was racially profiled and denied a loan in Episode 2.

It’s clear by Episode 3 that Sam is understandably frustrated with America on several different levels. “Maybe I made a mistake,” Sam tells Bucky. “Maybe I shouldn’t have put [the shield] in a museum. Maybe I should have destroyed it.”

Though Sam became Captain America in 2015’s All-New Captain America comics, it looks like that may not be the case here. As showrunner Malcolm Spellman told The Ringer, it’s impossible for Sam to move past America’s injustices. “We knew we didn’t want to just have [Sam] get to some point where he’s like, ‘Oh, all good. I’m going to forget 400 years of history. It’s all good. We live in a post-racist world.’ At no point is Falcon landing there.”

Where the show goes from here, though, is unclear. Will Sam keep the Falcon mantle, go entirely rogue, or pursue political office to try and change things from the inside? Or will he actually become Captain America anyway, in the hopes of redefining what America stands for?

Bucky is Working with Wakanda

Despite Baron Zemo being the one to reawaken Bucky’s Winter Soldier programming in Civil War, Bucky is surprisingly willing to work with Zemo in Episode 3 to find out more about the Flag-Smashers. There might be an obvious reason for this: per ComicBook.com, Bucky could secretly be working with Wakanda to bring Baron Zemo to justice. Remember that Zemo’s initial plan to break apart the Avengers in Civil War involved him setting off a bomb that ultimately killed the Wakandan king (and Black Panther’s father). After Zemo was arrested, Bucky was turned over to the Wakandans, who helped deprogram his Winter Soldier programming and finally find some peace.

It’s possible that he still feels he owes them a debt and always intended on handing over Zemo to the Wakandans so he could face them for what he did. At the end of the episode, Bucky follows a trail of Kimoyo Beads and meets up with a Dora Milaje, Ayo. "I was wondering when you were going to show up," he says, to which she responds, "I'm here for Zemo."

Perhaps this whole time Bucky has actually been just trying to get back to Wakanda. After all, he looked pretty unhappy about having to fight again in Infinity War. Please just let this man go to therapy and rest.

Sharon Carter is the Power Broker

Sharon Carter is very different from the studious S.H.I.E.L.D. agent we met in Winter Soldier. We learn that since S.H.I.E.L.D. fell apart and she was branded a fugitive in Civil War, she’s been on the run and hiding out in Madripoor. Bitter and angry, Sharon claims she now makes a living as an illegal art dealer, but she seems extremely established in her field. Per The Wrap, this has lead to theories that Sharon is actually the Power Broker, the mysterious crime lord who the Flag-Smashers stole the super soldier serum from.

While Sharon is hopefully not actually evil — she was friends with (and briefly a love interest for) Steve Rogers too, after all — we know she’s at least hiding something. “We’ve got a big problem. Actually a couple of them,” she tells her driver after meeting up with Sam and Bucky.

Zemo is a Double Agent

It’s still unclear which of Falcon’s three antagonists will become the primary villain, but right now Zemo looks like the least likely culprit. One fan on Reddit theorizes that Zemo could even be unknowingly working as a double agent to help the U.S. government uphold the Sokovia Accords. Reddit user DaMihiAuri postulates that not only is the U.S. government behind the Flag-Smashers, they also allowed Zemo to be released so the public would fear for their safety and demand more military intervention.

It’s unclear if Falcon would go so far as to paint the U.S. government as the real villain (although it would certainly be a bold move). Zemo also doesn’t seem like someone who would fall for being used like that. But the show is at the very least critical of American society, so maybe it’s not a totally far-fetched idea. Somebody may very well be manipulating the master-manipulator Zemo, and it remains to be seen if he’ll be a friend or a foe.

Fans familiar with the comics are assuming John Walker is eventually going to show his true villainous side. While Walker did take on the Captain America mantle in the comics, he later had to step down because his brutal responses to terrorism were completely at odds with what the shield was meant to represent. In the comics he also had a similar power set to Steve Rogers, and ComicBook.com theorizes John Walker may already be a super soldier in the show, too.

While Walker claimed in Episode 2 that he’s just a regular man, he somehow managed to go toe-to-toe against the superhuman Flag-Smashers and quickly deflected questions about being like Steve Rogers. If he has illegally obtained powers, that makes him as volatile as his comic book counterpart. And if he ends up pursing a personal agenda against the Flag-Smashers — whose message of unity is entirely against his belief of U.S. exceptionalism — then he may just become a dangerous force for Sam and Bucky to reckon with.

Karli Will Team Up with Sam and Bucky

One of the most difficult moments in Episode 3 is when Karli, who was hailed as a type of Robin Hood in the prior episode, bombs the GRC with innocent people assumedly still inside. While this would suggest Karli and the Flag-Smashers are now the primary villains, Falcon star Erin Kellyman told Bustle that her character doesn’t really fall “on either spectrum” of good or evil. Creator Malcolm Spellman also told Entertainment Tonight that he views Karli as “the glue” of the series. So is it possible she’ll end up being an ally?

On Reddit, user RockyTopBalboa theorizes that it could be Zemo who’s been manipulating Karli and her group all along. In the comics, Morgenthau’s father was killed during an embassy riot, and they suggest in the MCU it’s one of Zemo’s bombings that actually kill Karli’s parents. Is it possible Zemo is funding the Flag-Smashers operations, while also pretending to work with Sam and Bucky to sow further discord? If that were the case and Karli realized it, she could eventually team up with Sam and Bucky to take Zemo down.

Alternatively, Zemo or John Walker might do something so egregious that she ends up siding with the good guys anyway.

Regardless of what happens, Falcon and The Winter Soldier is getting increasingly complex, and however they wrap up the story will undoubtedly have repercussions for the rest of the MCU.

More like this
'The Queen’s Gambit' Season 2 Tweet Wasn’t From Anya Taylor-Joy
By Mary Kate McGrath, Jack Irvin and Grace Wehniainen
Ashton Kutcher Wants Danny Masterson “To Be Found Innocent” In Rape Retrial
By Jake Viswanath
Netflix Shut Down 'Bridgerton' S3 Rumours About A “Very Dark” Storyline
By Bustle
Here’s What Happens To Bill & Frank In 'The Last Of Us' Video Game
By Brad Witter
Get Even More From Bustle — Sign Up For The Newsletter
From hair trends to relationship advice, our daily newsletter has everything you need to sound like a person who’s on TikTok, even if you aren’t.