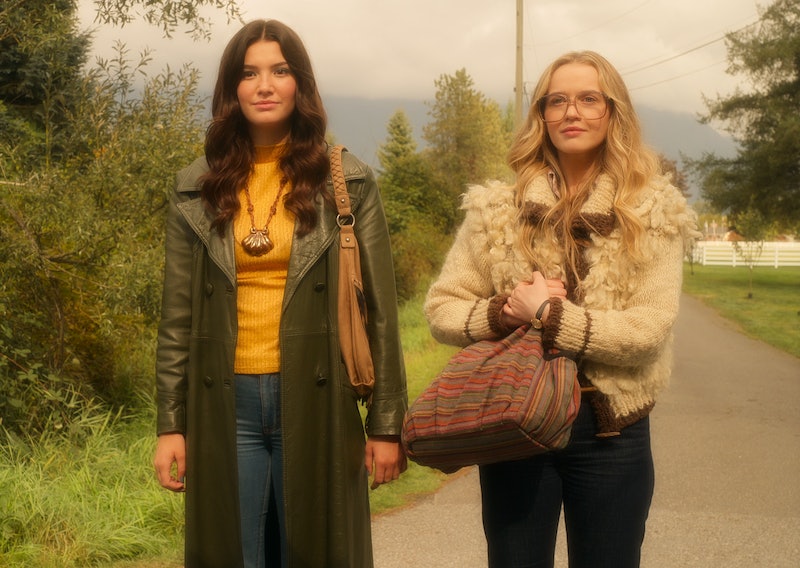 The cause of the rift between life-long friends Tully (Katherine Heigl) and Kate (Sarah Chalke) will finally be revealed in Firefly Lane Season 2, which will be the series’ final season.

Heigl said it will be similar to Season 1 as the show moves through the decades and gets the backstory that explains their rift. "There’s some great character drama for all of us that we go through this season and with the audience. Like Sarah said, there’s just so much. I don’t want to give anything away but it’s so good," Heigl added to ET Online.

Part 1 will launch on Dec. 2, 2022 at midnight, Netflix confirmed to Bustle. The first part will run for nine episodes, and then Firefly Lane Part 2 will premiere sometime in 2023 to close out the story with the remaining seven episodes. Netflix has not yet announced a specific date for Part 2.

Heigl and Chalke first announced Season 2 in a Zoom video last year, where they answered questions from fans. On the topic of the rift, Chalke assured viewers that the “issue between Tully and Kate ... is family-related and has nothing to do with Johnny.”

"One of the beautiful things I will say about this story, and one of the reasons I love it, is that even though there is a love triangle, their relationship is bigger than that," creator Maggie Friedman told ET Online. "Their sisterhood is stronger than any man could come between them. And they are soulmates. I think that's cool because there's a way that story could've been told where it's all about Johnny and them cat-fighting over Johnny. But that's not what it is at all."

The trailer for Season 2 shows an estranged Tully and Kate dressed in all black at Kate’s father’s funeral. They look at each other with pained expressions before Kate suddenly leaves to go inside the church, leaving a tearful Tully outside. In another scene, they pass by each other with zero acknowledgment.

Season 2 will also dive into how Kate is dealing with Johnny's ill-fated trip to Iraq, while Tully faces a lawsuit after walking away from her talk show, which leads to her starting her career all over again. Tully also searches for answers about where she came from, including a quest to find the father she never met — whose identity was always kept a secret from her by her mom, Cloud (Beau Garrett).

Meanwhile, the final season will travel back to the ’80s, when Kate and Johnny fall in love and Tully’s career rises. Then in the ’70s, we’ll see how the teenaged Kate and Tully struggled to keep their friendship together when Cloud went to jail for dealing drugs and Tully went to live with her grandmother. And then, of course, we’ll also see the ending to their tale — and if the TV show follows the same plot as Kristin Hannah's original 2008 novel, it’s sure to be a tearjerker.

This article will be updated as new information about Firefly Lane Season 2 Part 2 becomes available.

More like this
The 'Freeridge' Cast Shared Their Hopes For A Potential Season 2
By Grace Wehniainen
Everything To Know About A Potential 'Lockwood & Co.' Season 2
By Gretchen Smail
'That '90s Show' Is Officially Coming Back For Season 2
By Gretchen Smail and Grace Wehniainen
Here’s Everything Coming To & Leaving Netflix In February
By Jake Viswanath
Get Even More From Bustle — Sign Up For The Newsletter
From hair trends to relationship advice, our daily newsletter has everything you need to sound like a person who’s on TikTok, even if you aren’t.