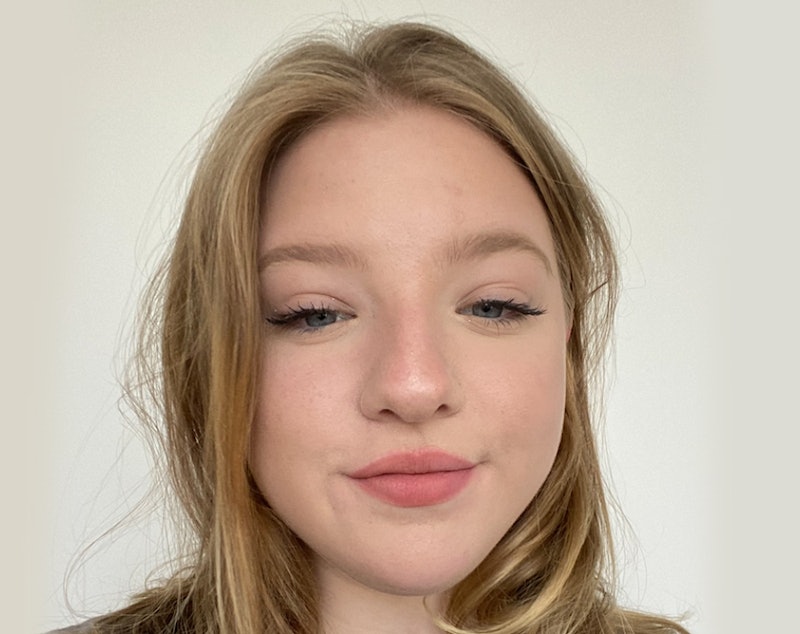 When celebrities (virtually) hang out with Bustle writers, we want to give them the chance to leave their mark. Literally. So we hand them a pen, a piece of paper, a few questions, and ask them to get creative. This time, We Are Who We Are star Francesca Scorsese is leaving her mark in the Bustle Booth.

Francesca Scorsese’s father always told her, “Never do TV.” It’s too fast-paced, he warned. It’s hard to get into character. Francesca grew up on film sets, watching him direct instant classics like The Wolf of Wall Street. But kids never listen, even when Dad is Martin Scorsese, the Oscar-winning director of several of the most loved movies of the last half-century in cinema.

“I was like, Okay," says Francesca, a junior at NYU Tisch School of the Arts — Dad’s alma mater. “And then of course my first real acting job was a TV show.”

The show is HBO’s luminous new coming of age drama We Are Who We Are from Luca Guadagnino, the Italian director of Call Me By Your Name. Francesca plays 14-year-old Britney, an army brat romping through Venice with youthful brio as she and her friends experiment with drinking, sex, love, and gender expression. The cast enrolled in Italian language classes before filming began, but Guadagnino was more focused on the young actors immersing themselves in Italian culture. “They were like, ‘Go out. Party. Go to dinner. Have fun, meet people, see what the whole little town is like and how it makes you feel. So that’s what we did,’” Francesca says of her months in the City of Bridges. “I felt so much more free.”

As for Martin Scorsese’s fatherly concerns about TV’s breakneck pace, set was “chaotic,” Francesca allows, but also fizzing with energy. “It was so different there. I mean, obviously everything was in Italian, but all the Italians are so loud and I love it. It was so much fun.”

Playing Britney even forced Francesca to stare down her fear of heights for a climactic zip-lining scene. “Luca had heard that I was so nervous, and he was like, ‘I think we should just break the ice and do it right now,’” she tells me. “I was like, No. That's not happening." Eventually, with a benign shove from the stunt guy, she made it from the jump tower to solid ground, where the rest of the cast was waiting to collapse her into a riotous hug. Guadagnino sent the footage to her parents; the clapperboard said, "Hi, Mom and Dad."

And for his part, Dad came around on Francesca's TV job. She scrolls through the Notes app on her phone to find the advice he gave her before she left for Venice: "Just play around, make mistakes and have fun... He was telling me not to let anybody influence me. He was like, ‘Whatever you want to bring to the character, do what you think is right.’”