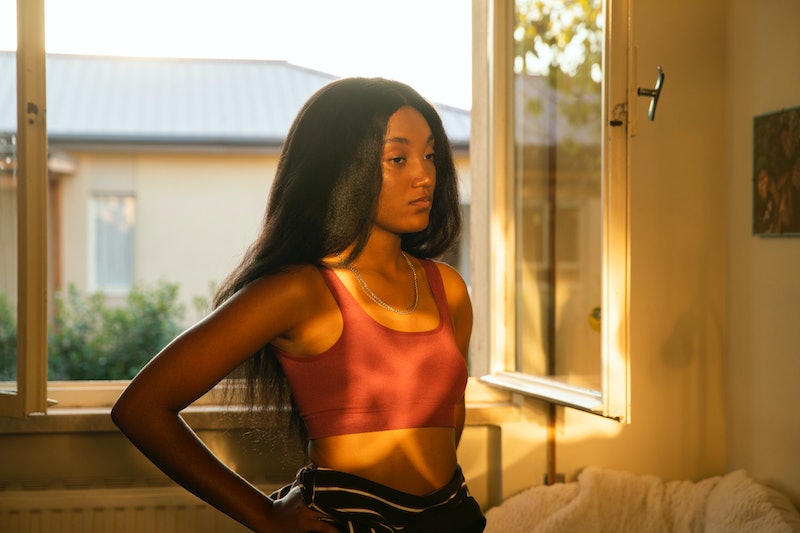 Spoilers ahead for We Are Who We Are Season 1 Episode 2. We Are Who We Are, the new HBO series from Luca Guadagnino, stars newcomer Jordan Kristine Seamón as a 14-year-old girl on the edge of puberty and Kid Cudi as her selectively progressive father, who seems to prefer his daughter to his son, even buying her a Make America Great Again hat to match his own. The series, set on a US military base near Venice, is a thematic extension of the Italian director’s Oscar-winning Call Me By Your Name, a film that took the excruciating awkwardness of coming of age and re-brushed it as something beguilingly romantic.

We Are Who We Are does the same, often by the same pentimento techniques. Scenes of faintly reckless teenage behavior (day drinking, public makeouts) are bathed in flaxen light and softly arpeggiating melodies. In Episode 2, when Seamón's character Caitlin gets her period for the first time while swimming, she runs to the sun-bleached dunes to wash away the blood with sea water she wrings from her hair. It’s clearly meant as a departure from the traumatic depictions of menstruation that have dominated film and television. For Sissy Spacek, who was terror-stricken and stumbling through the locker room in 1976's Carrie, or Brooke Shields, wading helplessly in the grotto in 1980's The Blue Lagoon, or Anna Chlumsky in 1991's My Girl, getting one's period was less a milestone of maturity than a first whiff of one's own mortality. "Daddy!" Chlumsky’s 11-year-old Vada screams through the funeral home she lives in. "I'm hemorrhaging!" At least in 2020, when Caitlin sees the blood on her leg, she knows exactly what it means. When a friend suggests they go home because of it, Caitlin declines: “I feel like dancing.”

Which isn’t to say Guadagnino's portrayal moves from idealistic to realistic. We see Caitlin clean the blood off her leg, but no one hands her a pad. Later we watch her fail to insert a tampon, but we never learn if she eventually figures it out or asks for help. Her period is approached with a liberal sensibility about women’s bodies, but it’s still largely symbolic. When she tells her dad she got “IT,” he says it’s no big deal. “It’s going to be great,” he adds for good measure. Except the next morning when Caitlin wakes up, everything is already changed. Her father, whom she usually accompanies as he sells cheap gasoline to locals off-base, has left without her. Caitlin understands she isn’t dying, but a clock of some kind is surely ticking. Periods make us aware of aging, of time passing. They force girls to reckon with what comes after girlhood.

Often in art where puberty is a gateway to sex, menstruation becomes a lazy shorthand for establishing a young woman as older than she looks or maybe even older than she perceives herself to be. But in a study on the social significance of when girls experience menarche, psychologists found that the clock girls develop has much more to do with how they stack up to other girls than with their readiness for sex. “Girls who sense themselves to be either on time or late at menarche have a more favourable experience than the girl who perceives herself as too early, thus deviant, within her peer group. The girl who considers herself late is reincorporated among her peers by her menarche, no longer the deviant by absence, and is reassured of normality,” an excerpt of First Blood: A Cultural Study of Menarche reads.The first person Caitlin runs to tell about her period is her best friend, Britney, rather than, say, her boyfriend; she does it excitedly, like a person relieved to be back in the club. “Happy period, you little slut,” Britney tells her, as succinct and depressing a distillation of menarche’s broader social meaning as one can imagine.

It's more than coincidence that, soon after, a new kid on base catches Caitlin dressed in her dad's button-down, flirting with a girl at a cafe counter and calling herself Harper. Rather than expose Caitlin, he gives her a pair of his jeans and a polo shirt — clothes that fit better than the baggy ones she borrowed off her father, who by now hasn’t taken her on deliveries for so long that customers comment on it. Menstruation may have forced Caitlin’s father into acute awareness of his daughter's biological sex, but for Caitlin it seems to have invited curiosity about her gender expression. Which makes Guadagnino's rendering of what’s often a clichéd or even unseemly moment of sexual blossoming into something more modern and more interesting: menarche is less a gateway into an assumed womanhood than a crossroads for questioning the assumption.