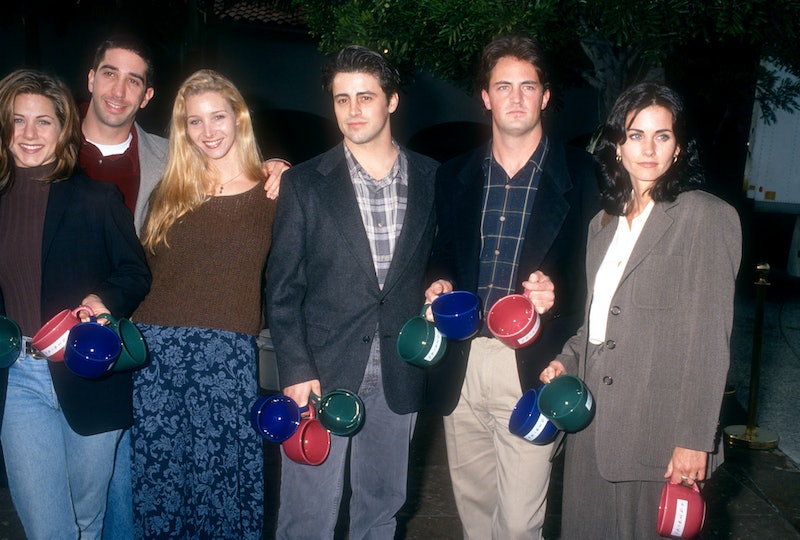 No matter what, the characters on Friends were always there for each other. The tight friendships between Monica, Phoebe, Rachel, Chandler, Joey, and Ross even led to a few romantic dalliances among the group. In particular, Monica and Chandler became one of the most popular couples on the sitcom, with their onscreen marriage and twins being two — err, three — highlights of the series. And the actors who played Monica and Chandler (Courteney Cox and Matthew Perry, respectively) were also much-talked about for their personal lives, as they were even rumored to have dated offscreen. But some genealogists just chimed in and made their onscreen and supposed off-screen connection extremely awkward. Apparently, these real-life pals share genetics.

Per CNN Entertainment, some genealogists from the online platform MyHeritage claim Cox and Perry are 11th cousins, apparently sharing two distant relatives from England who were married 500 years ago: William Osbern Haskell III and Ellen Haskell. It’s reported that Ellen and her two sons emigrated from England to America, and her son Roger is a “direct ancestor” of Cox. The second son, also named William, is Perry’s direct ancestor, with the familial connection solidified via Cox’s mom, Courteney Copeland, and Perry’s dad, John Bennett Perry.

And yes, the MyHeritage researchers who worked on this case are 100 percent sure that the actors are indeed related. MyHeritage’s head of research Roi Mandel told CNN, “We went into this line very deeply, we checked every name. We found a lot of records that support it, and we have confidence that they are related.”

“This is not such a surprise. It makes sense that when you go so many generations back, the chances of people being connected are higher,” Mandel added. The MyHeritage team also uncovered that Cox and Perry are related to Lady Gaga as well, so one can only imagine who else is sitting in the “Bad Romance” singer’s family tree. This development also adds another layer to Gaga’s appearance on the May 27 Friends reunion special. This is turning out to be quite a family affair.

Now, there’s no doubt that Cox and Perry’s family connection gives a whole new meaning to Pheobe Buffay’s “My eyes! My eyes!” scene.

More like this
Here’s Why Danny Masterson’s Hyde Isn’t In 'That '90s Show'
By Brad Witter
'Friends' Star Maggie Wheeler Offers Support To Matthew Perry After Reading His Memoir
By Alyssa Lapid
Man Meets Politics: ‘Boy Meets World’ Star Ben Savage Is Running For Congress
By Jake Viswanath
'That '90s Show' Star Callie Haverda Got Advice From Mila Kunis & Ashton Kutcher
By Brad Witter
Get Even More From Bustle — Sign Up For The Newsletter
From hair trends to relationship advice, our daily newsletter has everything you need to sound like a person who’s on TikTok, even if you aren’t.