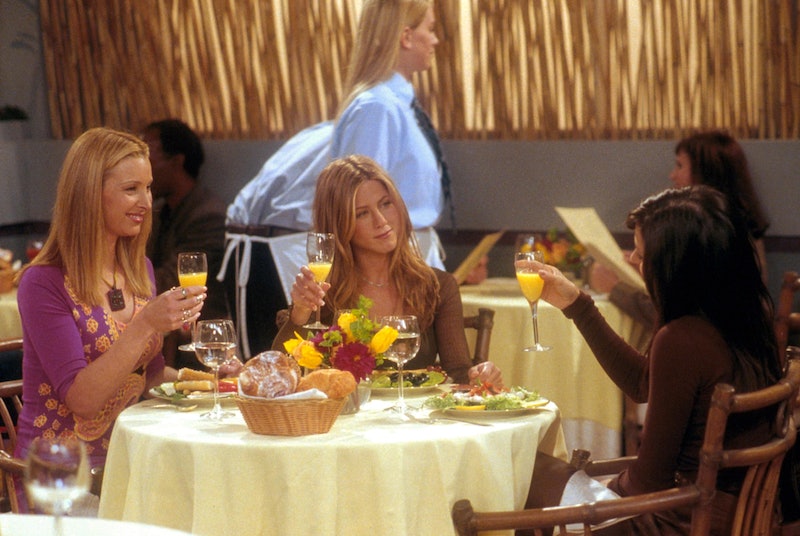 Rachel, Phoebe, and Monica will be there for you on election day, and the women of Friends reunited to encourage fans to vote too. On Sunday, July 26, Courteney Cox shared a video of her reunion with Jennifer Aniston and Lisa Kudrow on Instagram to promote #RegisterAFriendDay, a campaign aimed at increasing voter registration. In the silent video, Aniston whispers something in Cox's ear as Kudrow nods, then the caption reads, "Friends don't let friends skip elections." The Friends trio also included information on how to encourage the people in your life to vote: just text FRIENDS to 26797 to see if you're registered to vote and send the information to your pals so they can do the same.

It's always good to see the Friends cast hang out, especially for a good cause, but Aniston gets extra credit for also sharing a screencap of Rachel gasping on her Instagram Story alongside the caption: "When you realize there are only 100 days until Election Day." Meanwhile, Kudrow posted a photo from the reunion with her pals alongside a caption with all of the #RegisterAFriendDay information.

Aniston, Cox, and Kudrow weren't the only actors to stage a nostalgic reunion for #RegisterAFriendDay. The casts of One Tree Hill, Will & Grace, and The Vampire Diaries also joined in the fun. On the movie side, Gwyneth Paltrow and Robert Downey Jr. shared a FaceTime that's sure to make fans of Marvel's Tony Stark and Pepper Potts happy.

Aside from the Friends reunion, the most exciting #RegisterAFriendDay collaboration came from the women of One Tree Hill. Not only did Sophia Bush (Brooke), Hilarie Burton (Peyton), and Bethany Joy Lenz (Haley) record a Zoom video for the occasion, they did it in character, complete with Haley telling Jamie to stop drawing on the walls and go play with his sister. In addition to spreading the important message that everyone should register to vote, their video also gave fans an update on where the characters are today.

In 2020, it looks like Haley is still a successful musician, Peyton is on the school board, and Brooke is running for office. That's right, Brooke Davis is officially on the (fictional) ballot, and she still has her high school campaign button to remind everyone that she's always been a boss. In fact, she's the one making sure Haley and Peyton know about #RegisterAFriendDay. "Friends don't let friends not vote," she reminded her Tree Hill besties in the video.

From the women of Friends to a trio of Tree Hill alums, the casts of your favorite shows are eager to get out the vote this year... and make us all "nostalgic little bunnies" (to borrow a phrase from Peyton) in the process.