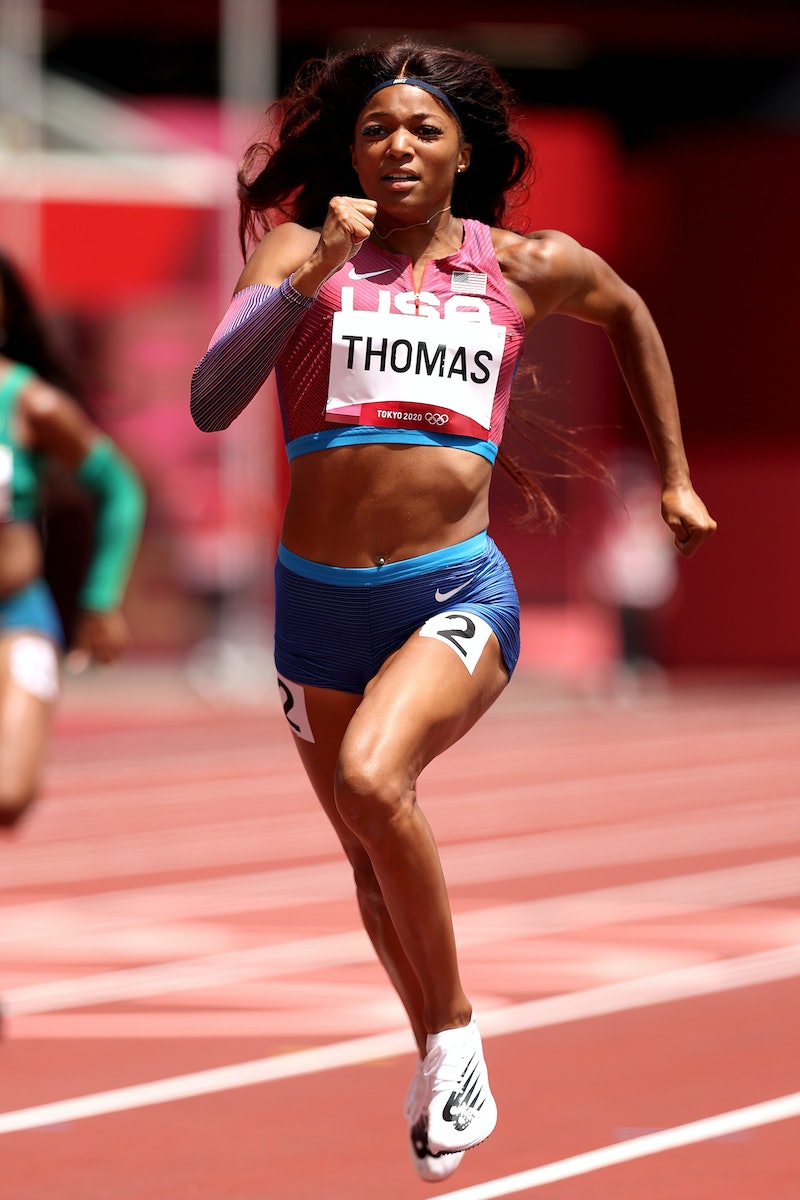 U.S. sprinter Gabby Thomas is busy with school. She’s currently pursuing a master’s degree in epidemiology and health care management at the University of Texas, moving closer to her big plan to create a more equitable healthcare system. But Thomas is taking a quick break from studying to take home a gold medal in the Summer Olympics, where she’s set to compete in the 200-meter race final on Tuesday, Aug. 3.

Already, the 24-year-old Olympic first-timer is the one to beat. Thomas wowed in the Olympic trials when she clocked the third-fastest time ever in her sport (21.61 seconds) and became the second-fastest woman in the history of the 200-meter sprint, bested only by the late Florence Griffith-Joyner in 1988. Not to mention, the Harvard University alum is also the first Ivy League sprinter to win the NCAA championship, is a New Balance partner, and is a bonafide Instagram star. From her academic history and public health ambitions down to her crush on David Schwimmer, here’s everything we know about track star Gabby Thomas.

Thomas Is A First-Time Olympian

While Tokyo is her first Olympics, Thomas did try out for the 2016 leg while she was a Harvard freshman. According to a Team USA report, Thomas said of the experience and finishing in sixth place, “I was just so inexperienced. I was really just a baby so new to the sport. I didn’t even know how Olympic trials worked,” adding, “I didn’t have intentional dreams for track and field the way that I do now.”

After that attempt, she became overwhelmed and almost gave up the sport altogether. During an appearance on The Today Show, she said that it was her mom, Jennifer Randall, who persuaded her to “push through” over “many phone calls.” Thomas laughed, “She’s the one who forced me to go into track to begin with in seventh grade. ... I signed up for softball, and she was like, ‘Nope.’” She then went on to win the NCAA championship in 2018, a feat for an Ivy League student.

After graduating in 2019, Thomas moved to Texas to train with three-time Olympian Tonja Buford-Bailey and join her group of trainees who call themselves the Buford-Bailey Track Club. In an NBC Sports podcast, Thomas said of the group, “A training group of all Black women who are all so inspirational and driven and motivated and succeeding… it’s very empowering.” She continued, “We all have experienced similar struggles… it’s just really nice to have that support system.”

Though she later made it through Olympic trials, she almost didn’t. An MRI from a hamstring injury revealed a tumor in her liver. Luckily, it was benign. So, she flew to Oregon in June for the trials and ran with — and beat — her all-time inspiration, legend Allyson Felix.

Thomas also excels academically. Aside from a master’s degree in the works, she has a double degree in neurobiology and global health and health policy from Harvard. Her interest in school is no surprise, given that her mother is also an academic. Randall is an associate professor at the University of Massachusetts and the Director of Evaluation for the Center of Educational Assessment.

While Thomas’ interest in neurobiology began because of her little brother’s autism, her public health interest was piqued after a class during her freshman year. “I took a very influential class called ‘Sick and Tired of Being Sick and Tired,’ and it was about health disparity among African Americans in the country,” she said on NBC’s podcast. She then felt a sense of purpose, with a new goal to “transform the healthcare system in a way that increases access to health care and eliminates some of the [racial] healthcare discrepancies that we see.”

With more than 165,000 followers on Instagram, Thomas is a social media star. She shares everything from her zodiac sign (she’s a Sag) to her adopted fur-baby (a pug named Rico), workout tips, track updates, and even her long-term aspirations to “transform the healthcare industry.”

She once posted a video revealing she’s “always wanted to be an actress and be a singer,” right before dropping verses of Beyonce’s “Irreplaceable,” and she even revealed that she has a crush on Ross from Friends. (“Oh my god, David Schwimmer, hi, I’m Gabby Thomas and I love you.”). But she also uses her clout for good, sharing her own self-care journey, encouraging melanin-love, and bringing light to issues like gender pay parity in sports and voting. A champion on and off the field.

More like this
'Breaking Bad' Duo Walt & Jesse Are Back — In This Super Bowl Commercial
By Jake Viswanath
Watch Kelly Clarkson Sing A Taylor Swift Breakup Song About A Toxic Relationship
By Alyssa Lapid
Khloé Kardashian Writes Touching Instagram Tribute To Tristan Thompson’s Mother
By Alyssa Lapid
'Love Island’s Kai Fagan Is Very Clear About What He Doesn’t Like
By Sam Ramsden and Darshita Goyal
Get Even More From Bustle — Sign Up For The Newsletter
From hair trends to relationship advice, our daily newsletter has everything you need to sound like a person who’s on TikTok, even if you aren’t.