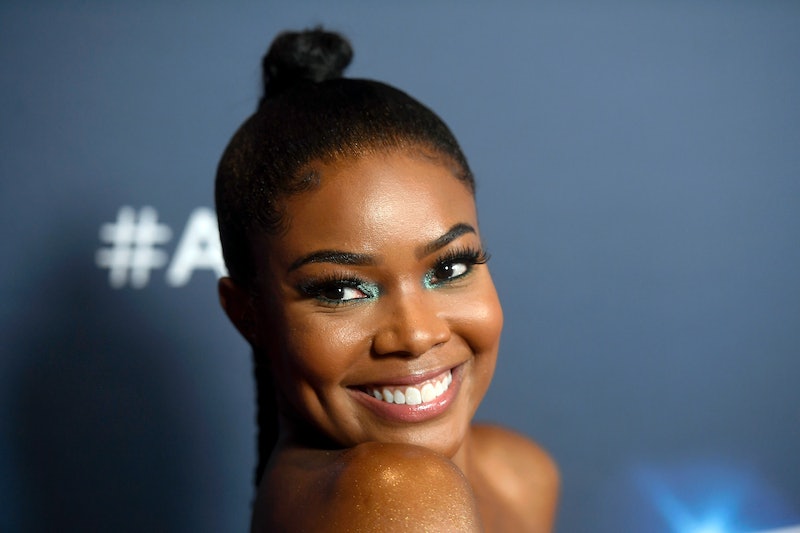 In 2001, Gabrielle Union booked a guest spot on Friends in "The One with the Cheap Wedding Dresses." Almost two decades later, she's ready to take on a bigger role in the iconic sitcom for one night only. Gabrielle Union is recreating Friends with an all-black cast for a Zoom Where It Happens fundraiser on Tuesday, Sept. 22. The reading, directed by Salli Richardson-Whitfield, follows the popular Golden Girls all-black table read, which starred Regina King, Tracee Ellis Ross, Alfre Woodard, and Sanaa Lathan.

The Friends reading will be hosted by Union and star Sterling K. Brown, Ryan Bathe, Uzo Aduba, Aisha Hinds, Kendrick Sampson, and Jeremy Pope. No roles have officially been confirmed, and it's unclear what episode the group will be reading. Though, if this poster is any indication, Brown will read Ross, Bathe (Brown's real-life wife) will play Rachel, Pope will read Chandler, Hinds will play Monica, and Aduba will play Phoebe with Sampson rounding out the cast as Joey.

This isn't the first time Friends has gotten a diversity makeover. In the years since the show premiered in 1994, it has been rightly criticized for showing an absurdly white Manhattan and New York City. So much so that when Jay-Z created a music video for his song "Moonlight," he re-imagined Friends with an all-black cast — Issa Rae, Jerrod Carmichael, Lakeith Stanfield, Tiffany Haddish, Tessa Thompson, and Lil Rey Howery.

Fans who want to watch the reading live on Zoom are required to sign up, and will receive a message about participating in the upcoming 2020 election in return. The second installment of the Zoom Where It Happens series will spotlight When We All Vote, a nonpartisan nonprofit that encourages voting and supports voter turnout. If the Golden Girls event is any indication, fans are definitely going to want to sign up and log on early. After the first Zoom Where It Happens installment, Ava DuVernay tweeted that they had hit the Zoom max capacity, with 50, 000 people attending the event, leaving some unlucky fans locked out.

The event is a full circle moment for Union, who reportedly was one of the very first black actors with a speaking role on Friends in 2001 — Sherri Shepherd appeared in one episode in 1998 — seven seasons into its original run. As she tweeted in 2018, Union was the "1st African American love interest" on the show, playing a woman who gets caught between Joey and Ross.