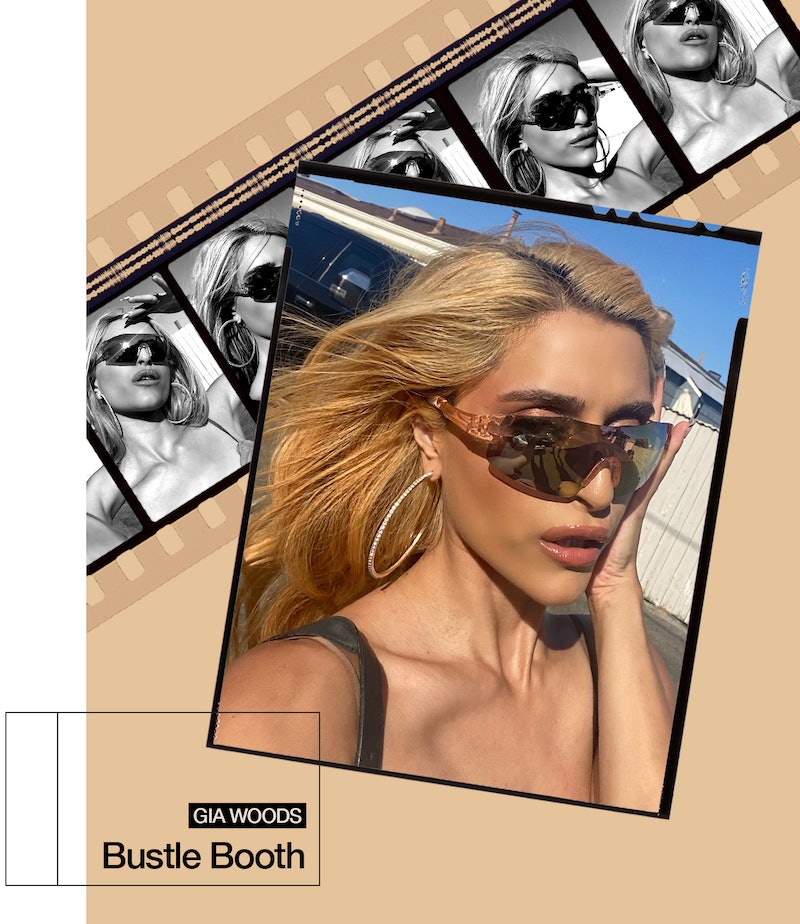 Gia Woods believes there’s a clear roadmap for a successful pop career, charted by none other than Madonna — and she’s set on following it to a tee.

Inspired by the queen of pop’s penchant for reinvention — and specifically her Confessions on the Dance Floor era, circa 2004 — the 25-year-old singer-songwriter went blonde and adopted a uniform of bodysuits for her new dance-pop EP, Heartbreak County Vol. 1. Promotional visuals for her cutthroat queer anthem “Next Girlfriend” feature a fully nude Woods hitchhiking on a Los Angeles highway, a direct reference to an image from Madonna’s 1992 photo book, Sex. “I was in the studio, and [my mom called me and said], ‘What the f*ck is this video of you naked on the internet?’” Woods tells Bustle. “I was like, ‘Mom, it’s just a visual. It’s blurry. You can’t even see my tits or my vagina.’”

Woods is used to such reactions from her ultra-traditional Persian relatives. In 2015, she came out as a lesbian to her family and friends via her debut single and video, “Only A Girl,” which quickly went viral and has since amassed over 11 million views. While it earned Woods a dedicated, largely LGBTQ-identifying fanbase, her parents perceived it as a stunt. To this day, they refuse to accept her sexuality. “My mom definitely knows, but we don’t talk about it. I’ll play her my new music, and she won’t even listen to the lyrics,” she explains. “I’m like, ‘How are you not trying to understand what I’m talking about through my music?’ … It’s challenging.”

Despite lacking full support from her family, Woods has devoted nearly her entire life to preparing for pop stardom. The LA native — whose first word, she claims, was “Hollywood” — has witnessed how success has affected those around her, and learned from others’ careers. When stardom comes knocking, she’ll be ready: “I look at Madonna and [Britney Spears’] older interviews [and] see a lot of male interviewers asking really inappropriate questions. I study these pop stars [and think], how am I going to address all the things that come with fame?”

On Heartbreak County Vol. 1, Woods explores the darkness that often accompanies a level of celebrity. “A lot of my favorite artists have died due to drugs or the chaos of fame,” she says, referencing a theme addressed on her dismally truthful track, “Fame Kills.” “I wish that was something in pop culture that could shift, and people [could] stop putting these pop stars on a pedestal… but I think, unfortunately, seeing their downfalls has helped artists in today’s world avoid getting to that place.”

Woods continues to speak about all of this from an outsider’s perspective, as if she weren’t herself chasing celebrity, both by cultivating an image and participating in interviews like this one. “I don’t want to do this to become famous. I actually f*cking love music and want to do it professionally, which means I have to basically be famous,” she says. But thanks to a lifetime in Hollywood, an extensive knowledge of pop culture, and the rejection she’s already endured from her family, she feels ready. “I’ve already experienced the bad side of that, [and] that’s the core of who I am. If I can handle that, I’m hoping I can handle the other sh*t.”

Learn more about Gia Woods, including her favorite Mean Girls quote, in her Bustle Booth questionnaire below.

Lemme go look… OK, so we got LA… of course. New York… was just there! Bahamas? Haven’t been in forever, LOL. London? Weird, ’cause I’ve never been. And Boston… a million years ago I would go and visit my first love-slash-girlfriend when we did long-distance after high school, LOL.

Gemini. I know what you’re thinking… psycho but hot ;)

God, so many to choose from, but I loved Rugrats. Definitely was a little sh*t like miss Angelica.

Everyone needs to go watch The White Lotus! It’s addicting, and there’s only six episodes. We love a quickie!

The Hills or Laguna Beach.

I’ve been reading this book called Hollywood Babylon [by Kenneth Anger], and it’s just so inspiring and eye-opening. It talks about the history of Hollywood and all the iconic legends.

“What planet is she from?”

More like this
Adam Lambert Called Out The George Michael Biopic Over Potential Casting
By Sam Ramsden
"Lavender Haze" Star Laith Ashley Breaks Down Filming With Taylor Swift
By Jake Viswanath
'That '90s Show' Star Callie Haverda Got Advice From Mila Kunis & Ashton Kutcher
By Brad Witter
Janelle Monáe’s Nonbinary "Coming In" Was About "Truth & Authenticity"
By Brad Witter
Get Even More From Bustle — Sign Up For The Newsletter
From hair trends to relationship advice, our daily newsletter has everything you need to sound like a person who’s on TikTok, even if you aren’t.