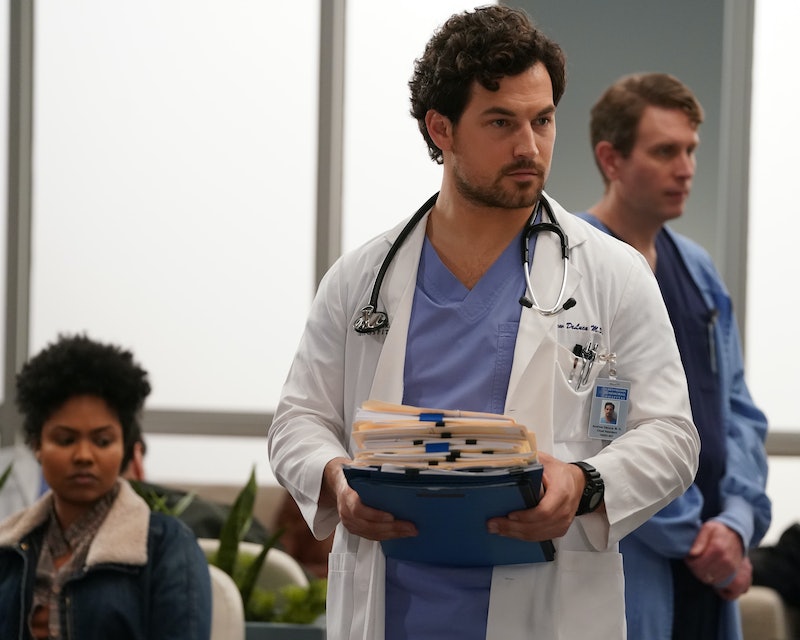 In order to accommodate a coronavirus pandemic storyline, there will be a time jump in Grey's Anatomy Season 17, according to star Giacomo Gianniotti, who plays Dr. Andrew DeLuca. It really shouldn't come as a surprise that the small jump in time needs to happen so Grey's can accommodate their previously revealed coronavirus storyline, but the move forward means the characters will be deep into the pandemic right at the start of the season. Perhaps more importantly from a character standpoint, they'll also have already with some of those emotional cliffhangers from the Season 16 finale, including Teddy and Owen's rocky relationship status.

"We're going to start the season about a month and a half [into] full COVID, so it's going to take place a little beyond where we left off in the last season," the actor recently told Entertainment Tonight. Gianniotti hasn't read any scripts yet, but he's guessing there could be "some flashbacks" to provide context. "We might have some things where we're referencing last season, just to have context leading up," he said. "But we are going to have a little leap when we start this season in terms of time. We're not picking up right where we left off."

Grey's showrunner Krista Vernoff said during a July Television Academy panel about pursuing a COVID-19 storyline, "There’s no way to be a long-running medical show and not do the medical story of our lifetimes." As for what's ahead for DeLuca, especially now that he's been diagnosed with bipolar disorder, Gianniotti teased, "I think he thrives in chaos and he certainly proved that in past seasons that when there's a lot going on, he steps up." He also believes DeLuca will "really shine and then thrive" in this type of situation.

There are also a few other changes coming to Grey Sloan Memorial in Season 17, including the addition of two new series regulars. Richard Flood (Dr. Cormac Hayes) and Anthony Hill (Dr. Winston Ndugu) are coming on full-time, TVLine reported on July 30. Hayes and Anthony both first appeared in Season 16 as respective love interests for Meredith and Maggie.

Season 17 sounds like it's going to be full of twists and turns, but it still remains unclear when filming will commence. Last season was cut short due to the ongoing pandemic and, according to Gianniotti, they were hoping to return to work at the end of August, but it was "pushed." But, when they do start filming again, Gianniotti said the health and safety of everyone is of the utmost importance. "We're obviously going to be tested multiple times a week and sort of separated in zones," he revealed. "We're going to have a lot less personnel on set. We're going to be wearing full PPE [personal protective equipment] of course. It's a new world."