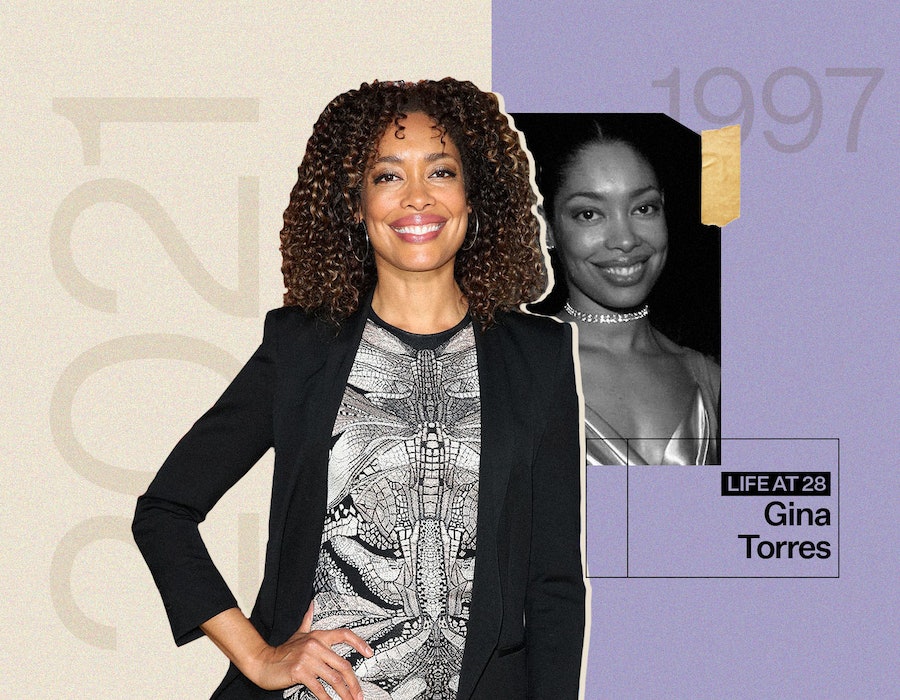 In her decades-long career, Gina Torres has embodied plenty of striking, sometimes lethal women. She slipped into brass bras and peek-a-boo pants as pirate captain Nebula in Hercules: The Legendary Journeys; leather vests as the warrior Zoë in Firefly; and tailor-made suits as accomplished law firm partner Jessica Pearson in Suits and Pearson. But though she appeared to arrive on-screen fully formed, at 28, Torres didn’t always feel confident when the cameras stopped rolling. “I sort of learned from these women that I was portraying along the way, and I was faking it ’til I made it,” the actor tells Bustle.

Several more roles — including a turn in the Matrix sequels — and awards later, Torres, 52, no longer needs to pretend. “I own all of it,” she says. These days, she’s drawing on her own strength and wisdom as she dons a first responder’s uniform on Fox’s procedural drama 9-1-1: Lone Star. Fresh from filming Season 3, she darts over to hop on Zoom still in costume. “That's why I love Tommy so much,” Torres says of her character, looking like the formidable Vega family matriarch and skilled captain of an emergency response team. “She's someone to root for. Not just her in the field being a badass, but you see the sacrifice — you see a well-rounded woman who doesn’t always have all the answers.”

Torres, too, is well-rounded. Outside of acting, she sinks her teeth into activism, joining Black Lives Matter protests with her daughter, fighting food insecurity, and championing Latinx inclusion in Hollywood by producing and creating more opportunities to tell Afro-Latinidad stories, as she does with her Princess of South Beach telenovela podcast. “To be able to use not just my voice, but really, truly my body, my blood, to get in there, get my hands dirty, and have it be something … It’s something that I need to do for my soul.”

Below, Gina Torres discusses navigating roles as an Afro-Latina, crying on a bus while wearing a brass bra, and the grand romantic gesture she still can’t stand.

I was living in Auckland, New Zealand, because I was a recurring character in Hercules: The Legendary Journeys. I’m from New York, so I kept my apartment there, although I had to sublet it because I couldn’t afford to keep all my residences going. And I would also come to LA to do pilots and audition. Traveling took up a lot of my time at that age. And I had also just met who would be my first husband, Laurence Fishburne. People think we met on the set of Matrix, but we met prior to that.

Did you have a signature look?

I guess I was in search of a look. In terms of hair, it does many things, so I would let it do many things. I was just so focused on work and becoming whatever character I needed to become. That was my look: any woman, every woman.

You’ve spoken previously about how you didn’t fit the standard of “American beauty” early in your career. How far along were you in the self-acceptance process at 28?

All of those things when I was 28 were really starting to become mainstream. I thought, “Oh, they’re starting to catch up. They’re gonna catch up.” Thankfully, they did.

What was your idea of indulgence back then?

Food is medicine. Food is self-care. Food is therapy. [For a] show like Hercules, and wearing a brass bra and peek-a-boo suede pants, I knew I had to stay in shape. That was the beginning of taking my physicality very seriously. Learning to do action sequences lit that fire in me. If I’m gonna pretend to be this superhuman, I gotta put a little effort into it.

How were you feeling about your life and career then?

Blessed. I come from a family that couldn’t be more separated from the theatrical world. So any job that I got always seemed like a little bit of a miracle to me. You have big dreams and it never feels like you’re making big changes or you’re taking big steps. It’s really a collection of occurrences and steps and parts that got me to where I am now. It’s been a learning curve because the older you get, you measure success differently.

You’ve portrayed such strong, empowered women over the years, from Jessica Pearson to Tommy Vega. Was that something you consciously worked toward at 28?

If I can paraphrase Jessica Rabbit, “I’m not really the boss, I’m just drawn that way.” Because of my physicality, because I tower over people, because I have a deep voice, because I have this innate authority, it was easy to hang those characters on me early on, really before I could cut my teeth. I sort of learned from these women that I was portraying along the way and I was faking it ’til I made it. Now, I’m just like, “Oh yeah, I own it. I own all of it. Absolutely.” It’s a right to be able to get to that place, and you have to own it. But it’s not free.

You’ve been vocal about wanting to change the stigma of Afro-Latinidad onscreen. How did your values and activism inform your early career?

At 28, I was just trying to work. We didn’t use terms like “platform” and “branding” at that time. It wasn’t so much about a stigma or to change people’s ideas because we literally didn’t exist. It was about being present. My mere existence, and being who I am completely and always and unapologetically so, that in and of itself was an act of rebellion. I was always myself and proudly Afro-Latina.

You asked to speak Spanish whenever possible for Lone Star. Is that something you think you could have advocated for at 28?

No. Just two or three years prior to that, I was told by producers that they didn’t want to “confuse” their audience [with my Afro-Latina identity], so there was some issue as to whether they wanted to hire me because my surname is Torres and they felt like that would be too confronting and confusing for middle America.

How did you start to feel comfortable advocating for yourself and the stories you tell?

There’s nothing like getting comfortable in your shoes, right? Getting a little lower in the saddle. Somewhere around Season 2 of Suits, one of the writers said, “So… Torres?” It always starts like that, by the way. “So… Torres… So are you half?” And they incorporated [my Afro-Latinidad] a little bit. I guess as I stood trial or I was taking the stand, [my character Jessica’s] middle name was revealed as Lourdes. So, I was like, “Oh, there’s a little Easter egg for all of you out there who are paying attention.” And then by Season 4, we just slowly, slowly worked it in so that by the time I did get to Pearson, I was like, “This is what we’re gonna do.” It was incredibly important for me to reestablish Jessica Pearson as being a woman of Afro-Latinidad descent.

What did sacrifice look like for you when you were 28?

Being away from my family, being disciplined enough to not see my friends and stay out as late as I actually wanted to, not having a B-plan, not being sensible about it all, which meant pursuing that backup career that meant my rent wouldn’t be late and that I wouldn’t be hungry.

“Going where the work is” is not just a catchy line. [It] means being prepared to be away for a long time and away from everybody. My mom was actually quite ill, so I couldn’t be with her and take care of her the way I maybe wanted to. That was hard. And now I have a daughter. That’s time away from her.

How did you feel about dating, marriage, and children back then?

I was always open to love and being loved and having a family and being in a partnership, so that was always something that was a part of me and what I knew my future held for me. I didn’t really stress about it.

I will say [this story] that I remember very clearly in New Zealand. I was in costume and in this production bus that was parked somewhere. It was just the right time of day that I could get a friend on the phone, and she had called to say that she’s having a baby. I was like, “Oh my god, that’s amazing! Congratulations! That’s just so exciting!” I hung up the phone, and I burst into tears. I didn’t even know that’s where my body was headed. I just lost it. I’m just in puddles, and I’m thinking, “She’s having a real life and I’m sitting in a bus in the middle of nowhere, in a brass bra, playing pretend! This is my life! What am I doing?” Fast forward, I’m happy with my choice, but in that moment, you’ve got nothing like the birth of a child to make everything else seem completely insignificant.

What was something you considered romantic at 28 but no longer do?

Surprise public proposals. The year that Laurence proposed privately [in 2001], the following day we went to a concert and somebody proposed — not unlike what happened with Adele. I’m sitting in the audience watching this play out and I lean over to Laurence and I said, “I’m so glad you didn’t do that. Thank you for not doing that.” I don’t care much for living my life too much out loud.

If you could give advice to your 28-year-old self, what would you tell her?