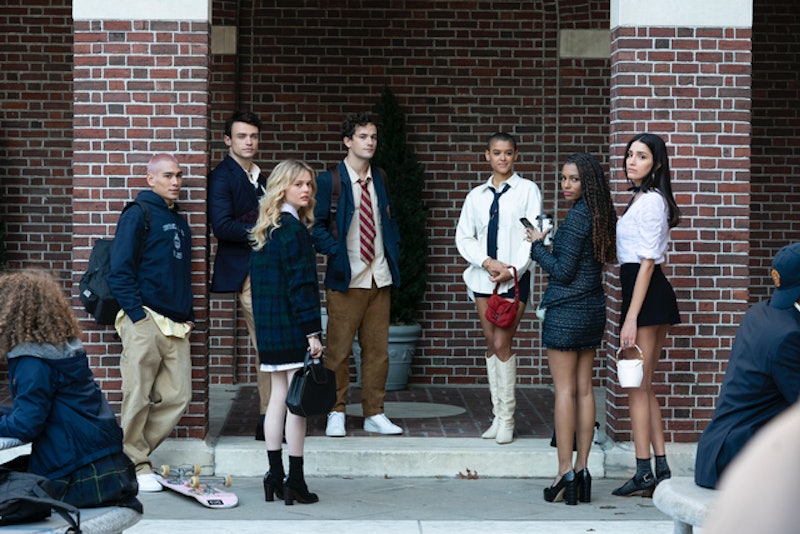 In the premiere episode of HBO Max’s Gossip Girl reboot, queen bee Julien (Jordan Alexander) spots her half-sister Zoya (Whitney Peak) while presiding over the Met steps. The two have been kept apart for all of their lives and come from different backgrounds — Julien is a rich influencer, Zoya is a scholarship student new to Constance Billard — but rather than look down upon her sister as her friends expect her to, Julien gently takes off Zoya’s Blair Waldorf-esque headband and invites her to be part of her clique. This is Gossip Girl 2.0: still edgy and rife with scandal, but less catty and more self-aware.

Picking up nine years after the original and centering on a new generation of elite Upper East Side teens, the show is set within the same world of extreme wealth but is more cognizant of its characters’ inherent privilege. The richest character tries to assuage his guilt by pouring himself into social causes; students discuss whether all of their expensive clothing was ethically sourced. “[In the original] there were no repercussions [for all the wealth]. It was just, ‘Look at that great bag,’” says Josh Safran, who served as an executive producer on both series and wrote the new show. “[In this iteration] you still get to see the bag ... but you understand also what's behind that.”

Another key difference? We know who Gossip Girl is from the start of the show — spoilers ahead — and instead of a student, it’s the teachers running the titular blog. Fed up with seeing kids continually exploit their status and resources to get ahead in school, they restart Gossip Girl anonymously on Instagram as a means to create consequences and force their students to take responsibility for their actions. Safran, who grew up on the Upper East Side, got the idea from hearing friends who teach at private schools talk about how wealthy teens have changed in recent years.

“I was curious, ‘What is it like to try and mold these kids who don't need [to go to college]?” he says, adding that this new dynamic also creates more tension on the show. Whereas the first time around, “we didn't get to see Dan post something about his sister while she was in the next room and watch it land on her and know what he just did was horrible,” here we get to see the teachers grapple with the damaging effects of their posts.

Many of the core elements of the original show are still present. Love triangles remain important, and there are plenty of rich kids doing irresponsible rich kid things that inevitably blow up. “In the writer's room we talk about the mathematical equation of Gossip Girl. There's going to be an event, all the characters are going to get to the event, and everything's going to crash,” Safran says. “[So] you still get the fun of that huge explosion [at the end of each episode].”

Though there’s not an exact one-to-one correlation between old and new characters, there are similarities. The villainous Georgina is resurrected in students Monet (Savannah Lee Smith) and Luna (Zion Moreno), while the hedonistic and sexually fluid Max (Thomas Doherty) is the clear Chuck in the group (except unlike Chuck, he always makes sure to ask for consent).

But the biggest throughline between the two series is the complicated relationship between Julien and Zoya. The original Gossip Girl blog thrived on Serena and Blair’s push-and-pull dynamic, and the teachers aim to replicate that success by instigating a love-hate rivalry between the two girls. “That was always the key to the Serena-Blair friendship ... that as much as they might war with each other, they also were sisters,” says original series creator Josh Schwartz, who now serves as an EP. “I think that was one piece of the storytelling architecture that we all felt was essential ... Everything else evolved from there.”

More like this
The 8 Best Aidan Shaw Moments On 'Sex And The City'
By Grace Wehniainen
The 'Gossip Girl' Reboot Creator Is “Looking For A New Home” To Air A Potential Season 3
By Brad Witter
Here’s What Happens To Bill & Frank In 'The Last Of Us' Video Game
By Brad Witter
'The Last Of Us' Video Game Revealed Tess’ Fate In The HBO Series
By Brad Witter
Get Even More From Bustle — Sign Up For The Newsletter
From hair trends to relationship advice, our daily newsletter has everything you need to sound like a person who’s on TikTok, even if you aren’t.