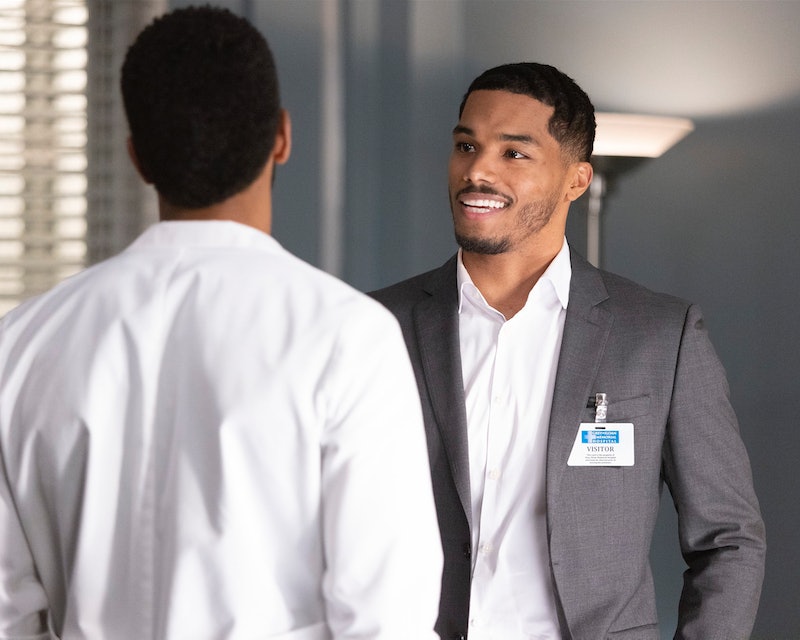 Spoilers ahead for Grey’s Anatomy Season 18, Episode 14. As Winston’s brother Wendell Ndugu on Grey’s Anatomy, Rome Flynn already has Shondaland as skeptical as when he played Gabriel Maddox on How to Get Away with Murder. Viewers will have some time to figure out what he might be up to, however, as Variety reported that the March 31 episode kicked off a recurring role for Flynn in Season 18. After the news broke, the actor who played Sam Keating’s secret son opposite Viola Davis on HTGAWM tweeted that the part was a “dream come true.”

On screen though, only time will tell if Winston feels that same way about the surprise family reunion with the salesman brother who didn’t even RSVP to his and Maggie’s wedding. (He had a job “go south” and was embarrassed he “couldn’t even afford a bus ticket to Seattle.”) Prior to Flynn’s debut, ABC described Wendell as a “typical younger sibling with a mischievous sense of humor” — which he exhibited when he showed up at Grey Sloan posing as a dead patient on a gurney — adding that he hopes to “impress Winston with his new sales rep role at a medical technology company.”

It turned out that self-described “former black sheep of the family” Wendell might have dropped Winston’s name — along with those of his other famed Grey Sloan colleagues — to secure the job though. The younger Ndugu also used his brother (unbeknownst to him) to finesse an impromptu sales-pitch meeting with Owen, who was filling in as chief for Bailey the day he visited. That was only the tip of the iceberg when it comes to their complicated family history though, as the episode finally added more to Winston’s backstory.

As Winston explained in the episode, both his dad and Wendell “flipped out on the outside” before his mom died of cancer. “Wendell would get into fights with anyone who crossed him,” he confided in Maggie, sharing a previous experience with panic attacks. “And my dad drank and just threw away money, and he landed in jail a few times. And even after everything he put us through over the years, Mom forgave him. And she would use her money for her treatment to bail him out. ... My whole life almost derailed because of them.”

Winston eventually had a change of heart though, and called his little brother back to Grey Sloan for a post-shift heart-to-heart. Before they could come back together though, he first told Wendell that he still blamed him for their mom dying. He later admitted it was an unfair accusation. “Look, her cancer, it took us out. It took us both out in different ways, man,” Winston said. “And she would be so angry if she knew... if she knew that we let it take us away from each other. I miss you, man. I’m glad you’re here.”

So Winston told him that if he wants “to stick around” Seattle, he can stay with him and Maggie, and he’ll try to introduce him to some people at the hospital. And given that Flynn, who’s also appeared in Netflix’s Raising Dion, The Bold and the Beautiful, and A Madea Family Funeral, will continue to appear on Grey’s this season, it seems Wendell is going to take him up on the offer.

Actor Anthony Hill, who plays Winston, previously teased to Bustle that he was excited for viewers to meet his character’s family. “I’m looking forward to having more of a three-dimensional man start to appear and [allowing viewers] to learn more about the ins and outs of this guy and what he’s about,” Hill explained last year. “Yes, he is about Maggie, and, yes, he knows he loves her and is there for her. But what else is up with this guy’s life?”

More like this
Ellen Pompeo Is Stepping Back From 'Grey Anatomy' For More Than Half Of Season 19
By Brad Witter and Sophia Moore
Everything To Know About 'RHOC' Season 17
By Brad Witter and Sophia Moore
'RHOSLC' Season 3 Will Likely Show The Cast’s Reactions To Jen Shah’s Guilty Plea
By Brad Witter
'Bridgerton’s Jonathan Bailey & Simone Ashley Just Teased A First Look Of “Kanthony” In Season 3
By Grace Wehniainen, Alyssa Lapid and Sam Ramsden
Get Even More From Bustle — Sign Up For The Newsletter