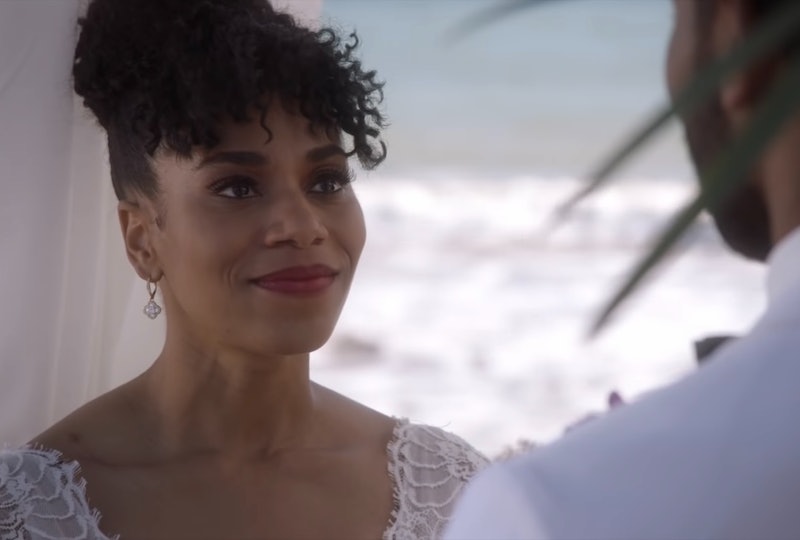 Spoilers ahead for Grey’s Anatomy Season 18, Episode 5. Maggie Pierce has been MIA since Grey’s Anatomy’s Season 18 premiere, and the show finally addressed her absence during the Nov. 11 episode. Missing her husband, Maggie texted Winston to ask him to send some, uh, photos. Equally wistful, Winston later explained to Richard that he was hoping to visit Maggie the next week in Boston, where she’s still apparently helping her father recover from hip surgery.

“You miss her pretty bad, huh?” Richard asked Winston in a later scene, to which he replied, “Oh my God, it’s like an ache.”

Though the “out of town” excuse brings to mind Alex Karev’s sudden departure from the series in Season 16, Kelly McCreary, who plays Maggie, has given no indication that she intends to leave the show. However, ABC hasn’t revealed a reason for the extended absence or a return date for the McCreary, who’s currently expecting her first child with husband Pete Chatmon. Promos for next week’s Thanksgiving-themed episode don’t show her either, though few characters are featured in general.

When announcing that she was expecting in August, McCreary said she didn’t know if the Grey’s writers would incorporate her pregnancy into Maggie’s storyline. When a Twitter follower asked if “all the extreme sex Maggie and Winston had” on their honeymoon was a hint that a Maggie pregnancy would be written into the show, McCreary played coy. “You will find out soon enough…” she wrote on Sept. 30 while live-tweeting the Season 18 premiere. Some fans are already predicting that Maggie will eventually return from caring for her father with a full baby bump.

Either way, McCreary has already gotten plenty of offscreen advice from co-stars Caterina Scorsone, Chandra Wilson, and Ellen Pompeo, on navigating the workplace while pregnant. “They’re tremendously helpful, supportive resources,” McCreary told People in August. “I really couldn’t be in a better workplace environment to have this experience. It’s such a parent-friendly and pregnant person-friendly environment.”

That certainly makes it sound like she filmed more than one episode, so hopefully Maggie will be back on Grey’s sooner rather than later.