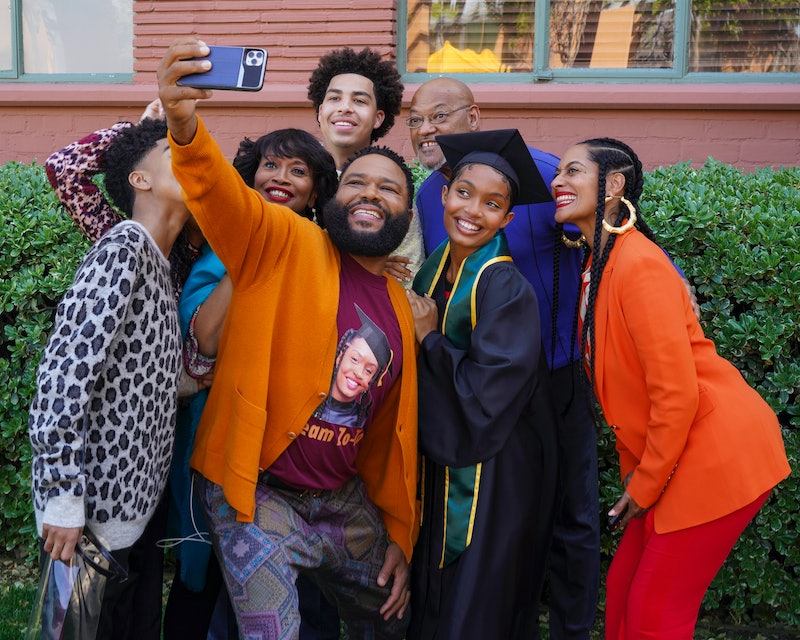 Zoey Johnson may be graduating from Cal U, but Freeform will still continue to follow her post-college antics in grown-ish Season 5. The network renewed the show on March 7, also revealing that black-ish star Marcus Scribner, who plays Zoey’s younger brother Junior, will join the cast full-time “as he embarks on his own journey to being ‘grown.’” That’s good for Junior fans, since black-ish is ending after eight seasons later this year.

Scribner was already slated to appear in grown-ish‘s Season 4 finale alongside the rest of the Johnson family, including Dre (Anthony Anderson), Bow (Tracee Ellis Ross), Jack (Miles Brown), Diane (Marsai Martin), Ruby (Jenifer Lewis), and Pops (Laurence Fishburne). It remains to be seen, however, if Zoey (Yara Shahidi) will move to New York with Luca (Luka Sabbat) — and exactly how large of a role Junior will play moving forward.

“I feel like a lot of these storylines about Zoey, trying to figure out what’s next, has been so resonant, especially now that we’re both seniors,” Shahidi, who’s graduating from Harvard in real life this year, told Essence in January, joking that her character have given her “a great roadmap of what not to do.”

There will also be some major changes behind the camera for Season 5: black-ish showrunner Courtney Lilly will take over as co-showrunner with Zakiyyah Alexander, as Season 4 showrunner Julie Bean and executive producer Jenifer Rice-Genzuk Henry exit the series. Here’s everything else we know about grown-ish Season 5.

Freeform has yet to announce the Season 5 premiere date, though there typically isn’t a long break between grown-ish seasons, which are generally split into two parts. After Season 3 ended in March 2021, the series returned for the first half of Season 4 in July. If the same pattern continues, viewers can expect grown-ish Season 5 to start airing this summer. It’s unclear, however, if the showrunner changes will cause any production delays.

Only time will tell what the Cal U crew going their separate ways means for the cast. Freeform has yet to reveal which actors are returning, but in addition to Shahidi and Sabbat, Season 4 also starred Trevor Jackson as Aaron Jackson, Francia Raisa as Ana Torres, Emily Arlook as Nomi Segal, Diggy Simmons as Doug Edwards, Jordan Buhat as Vivek Shah, and Chloe and Halle Bailey as Jazz and Sky Forster.

Though Shahidi agreed in her Essence interview that Zoey’s education, career, and love life have been “a little too intertwined” up until this point, she still hasn’t decided if she’s #TeamAaron or #TeamLuca. She said she’s “really enjoyed watching Zoey and Aaron in a relationship,” but can’t deny Zoey and Luca’s shared passions, namely for fashion. “It’s really hard to say,” she added. “I’ve just thoroughly enjoyed how this season [has] kind of teased out both relationships as they’ve evolved.”

This post will be updated as more information about grown-ish Season 5 becomes available.