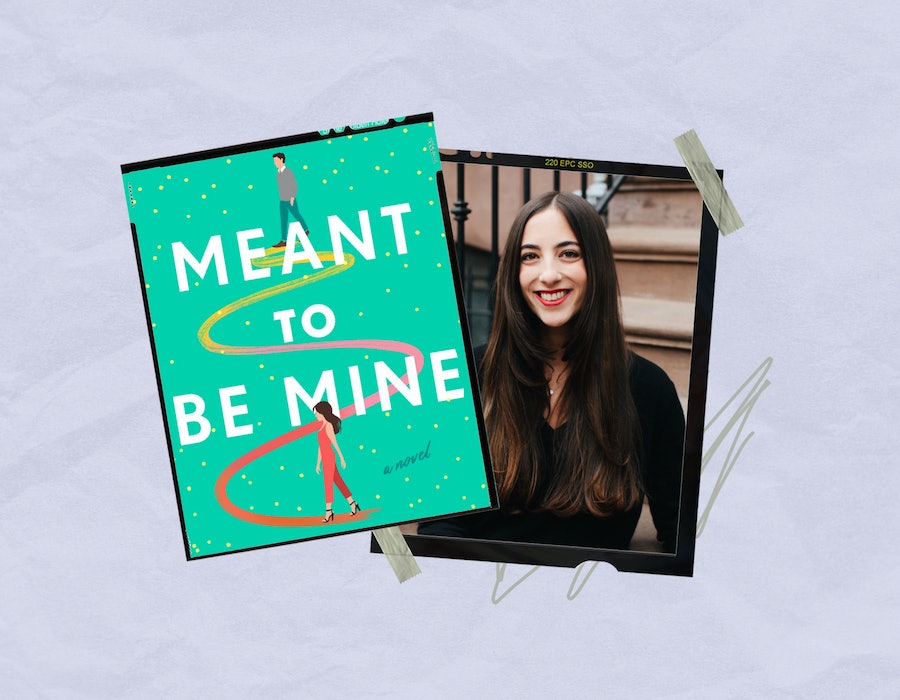 If someone could tell you exactly when you’d meet your soulmate, would you want to know? That’s the question at the heart of Meant to Be Mine, the latest book from Hannah Orenstein, the Deputy Editor of Dating at Elite Daily and author of Head Over Heels.

“When I started writing the book, I thought, ‘Of course I would want to know,’” Orenstein tells Bustle. “But as I wrote this book, I realized I absolutely would not, because it comes with so many unforeseen complications.” Complications like worrying that your destined match isn’t right for you — a fear Orenstein’s heroine confronts head-on in the book.

Meant to Be Mine centers on Edie, a 29-year-old personal stylist whose grandmother, Gloria, has accurately predicted when every member of her family will meet their significant other. On her prophesied date, Edie meets a hunky musician named Theo, and knows he must be The One — but when their relationship isn’t as idyllic as she’d expected, she begins to have doubts.

Orenstein doesn’t have a psychic elder guiding her way, nor does she put much stock in the idea of soulmates. But there’s plenty of her and her family in the book, from her Jewish traditions to her “sharp, sassy” grandmother, whom she used as a template for Gloria. And just as Orenstein suffered a loss while writing the novel, Edie grapples with grief. “I wanted to write something that reflected how difficult [loss] can be, but also this really vibrant, bright version of New York City in a post-pandemic world, where a reader could maybe escape into something that felt joyful,” she says. “Because we didn't know what 2022 was going to look when I was writing this.”

Below, Orenstein talks about her own eccentric grandparents, whether she believes in destiny, and her family’s matzo ball soup recipe.

What were your inspirations for the book?

I started writing this on April 1, 2020, and I was thinking about all of the things I really missed. I wanted to wear real clothes again, so Edie became a stylist. I missed going out to restaurants and bars and live music, so Theo became a musician. I was thinking a lot about politics, so there's a campaign and a race in this book.

But mostly my light at the end of the tunnel for the pandemic was that I really wanted to hug my grandparents. I think we all had that moment of thinking like, "Okay, when this is all over, this is the thing that I want to do." And for me, that was going to hug my grandparents who were living in Florida at the time. So Gloria became a really central part of this book. There is something very special about being an adult and being able to relate to your grandparents in a different way than you did as a child, so I wanted to write about that.

I also knew that I wanted my book to be more explicitly Jewish than my others have been. The family in this book really represents my family. It really reflects our culture in a way that I had hesitated to do in the past because I felt it might have been too niche for a lot of readers. But the feedback I've been getting is really every culture cares a lot about their grandparents. Every culture cares a lot about food. Holidays are really important to everybody. Every culture has parents that are poking into their lives. The things that might be niche on the surface are really universal.

And then as I was writing the book, that November, both of my grandparents died less than a month apart.

Thank you. [The book] just took on a new meaning for me because it was now really a tribute to what they meant to me. I don't think I could have articulated this at the time that I started writing it, but in hindsight to me it feels really clear that this book is about the pressure that so many people face to live their life on a certain timeline — especially for women and especially for young women, to meet their person at the right time, quote unquote, or to get married or to have kids the right time. And Edie definitely faces those pressures because of a different reason, because of the situation with her family.

Did you take direct inspiration from your grandmothers when you were writing Gloria? Were they these eccentric figures as well?

Yeah, so all four of my grandparents are really in the book. My dad's parents passed away many, many years ago, but his mom, Rose, was this really iconic New Yorker, a lot like Gloria. She was a farm girl from rural Pennsylvania and eventually came to New York, and she was ahead of her time in many ways. She traveled abroad internationally by herself at a time when women really didn't do that. She called her travel diary from that period “A Broad Abroad,” which I just think is fabulous.

That's a blog title right there.

It's amazing. And she didn't get married or have a kid until she was well into her 30s, which was pretty uncommon in the 1950s. And she was brilliant. She didn't really work because that's just not what women of her era did. Her husband didn't want her to work, but she was brilliant, and she was pen pals with the mayor, with Ed Koch when he was in office in the ’70s, and she loved ballet and the opera and she was so glamorous and everybody loved her so much, the same way that Gloria is beloved in the book. But she also had this sharp, sassy side to her, too. Sometimes a grandmother should be a little bit sassy. So she's in the book in that way.

And then my mom's dad, Jerry, he just had such a colorful vocabulary. From him, I got a lot of the Yiddish and a lot of just colorful language that Gloria uses. And then I didn't really know my dad's dad very well, because he died when I was very little, but he hated Barbra Streisand and is buried next to her family's mausoleum, which is briefly mentioned in the book. I just think that's a hilarious story because they will spend all of eternity together.

The book plays really heavily with this idea of fate and we get this tension between a higher will and personal action. Do you believe in fate on any level? Or soulmates?

I don't personally, but I know that for so many people the idea [that] things will happen the way that they're supposed to happen is such a powerful concept, so even if I don't personally have that tension, I was still eager to explore it.

I used to work as a matchmaker for a dating service — and that is just a bizarre and fascinating industry — but partly because of that I really do believe that there are so many people out there for all of us that could be incredible partners. I don't think there's just one person. But again, it was fun to play with, examining the insta-love trope and really considering what makes a happily ever after. Because in this book, the happily ever after is not what you might guess from the way that a lot of the book unfolds.

Do you consider the ending a “happily ever after,” or a “happy for now”?

I think this is happily ever after. Yes.

'Meant to Be Mine' by Hannah Orenstein
Amazon
More like this
Nina LaCour Had To Grow Up To Write 'Yerba Buena'
By Casey McQuiston
Annie Lord’s Memoir Will Make You Believe In Love Again
By Shahed Ezaydi
Ottessa Moshfegh Is Happy To Be Your “It” Girl
By Arya Roshanian
'The Summer I Turned Pretty' Book Ending Is An Emotional Rollercoaster
By K.W. Colyard
Get Even More From Bustle — Sign Up For The Newsletter