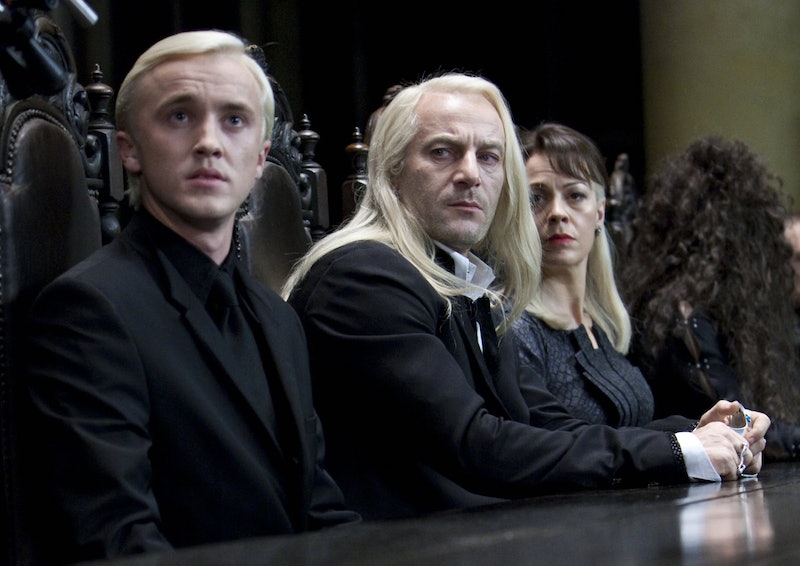 Lucius Malfoy is so evil that even the actor who played him in the Harry Potter saga didn’t want to be Lucius Malfoy. During the Harry Potter 20th Anniversary: Return to Hogwarts reunion special, which premieres Jan. 1 on HBO Max, actor Jason Isaacs revealed that he didn’t mean to audition for the role of Draco Malfoy’s scary and militant father. In fact, he was actively against playing the role at first. “I’m convinced I ended up playing Lucius because I didn’t want to,” he said.

Isaacs admitted that he auditioned for Gilderoy Lockhart, the charming but fraudulent Hogwarts professor, but director Chris Columbus asked him, “That was great, would you mind reading a different part?” When he found out that he needed to read for Lucius, Isaacs was hesitant, as he was already cast as Captain Hook in 2003’s Peter Pan. “I thought, ‘Well, I don’t want to play two children’s villains,’” he said. Ironically, his contempt for the audition won him the role. “I read through gritted teeth, deeply bitter, and of course, that’s exactly what was necessary and they asked me to play Lucius, and thank God they did,” he recalled. The part of Gilderoy went to Kenneth Branagh.

Lucius is far from the only villain in the Wizarding World of Harry Potter, and he serves a much greater purpose than just scaring young students (and viewers): “The point of him being in the story, to me, is to explain why Draco was such a horrible, heartless, sadistic bully at school,” Isaacs said. As actor Tom Felton put it, Harry Potter’s enemy Draco “is a product of his parents, and he’s got really bad parents.”

During the reunion special, the actors opened up about working with each other as onscreen father and son, with Felton calling Isaacs a “Jekyll and Hyde” of sorts. “Working with Jason was a real treat,” he said. “In fact, working with Jason was not always a treat. ... He would be this evil father, then they would say cut and he would come and give you a cuddle and go, ‘Did I hit you too hard?’”

Isaacs recalled the very first scene that he shot for Harry Potter, which established just how scary he could be, especially for a young Felton. “Draco touched something and I used this cane and I went, ‘Don’t touch anything, Draco,’ but I didn’t know how sharp the teeth were,” he recalled. “They went right into little Tom’s hands, and he looked up at me and his eyes welled with tears. I went, ‘Tom, I’m so sorry, I didn’t realize how sharp they were and how heavy it was,’ and he went, ‘Oh no, it’s alright, it’s good for the scene.’” The scene didn’t make the final cut of the first film and was simply left as a deleted scene on DVD.

More like this
12 Years Ago, Austin Butler Manifested His Oscar Nom In This Disney Movie Scene
By Jake Viswanath
At 28, Debra Jo Rupp Was Living A Much Different '70s Show
By Grace Wehniainen
A New 'And Just Like That' Table Read Pic Confirms A Key Character's Return
By Jack Irvin and Grace Wehniainen
Here’s Everything Coming To & Leaving Netflix In February
By Jake Viswanath
Get Even More From Bustle — Sign Up For The Newsletter
From hair trends to relationship advice, our daily newsletter has everything you need to sound like a person who’s on TikTok, even if you aren’t.