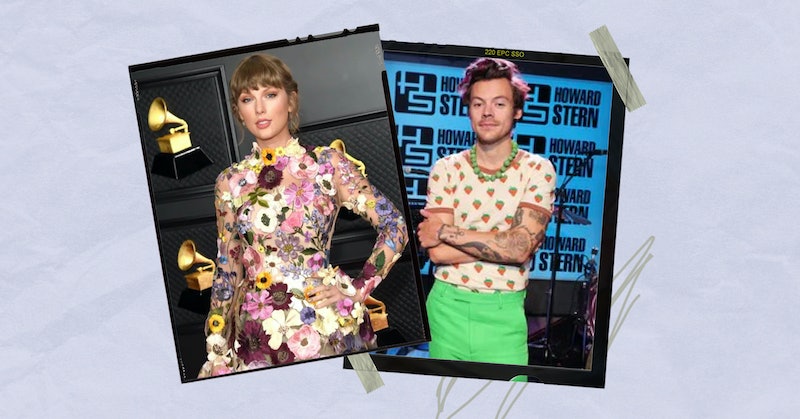 Taylor Swift and Harry Styles actually have a few things in common — aside from the fact that they reportedly dated on-and-off before splitting in early 2013. Now, the Grammy-winning artists both have songs named “Daylight.” After the tracklist for Styles’ new album Harry’s House was unveiled on April 30, fans began speculating that “Daylight” was written about Swift, given that she released her own song with the same name on her 2019 album Lover. And on May 19, Styles addressed that theory head-on.

During an interview on The Howard Stern Show, the outspoken radio host asked Styles outright if “Daylight” was about Swift. At first, the One Direction alum laughed off the romantic speculation, jokingly saying, “Here we go,” before denying it completely. “You're reading too much into it,” he confirmed. "You know I'd love to tell you that you're spot on, but I can't. No, sorry.”

While he didn’t specify who or what “Daylight” was inspired by, Styles did open up about writing the song in a separate interview with Apple Music’s Zane Lowe, saying he forced himself to stay up all night as the lyrics were quickly coming to him. “‘Daylight’ was like, we have to find a way to stay awake & finish this because if we all go to bed then this is going to turn out not what it would if we finished it tonight,” he recalled. “We pulled an all-nighter & then went down to the beach as the sun was coming up.”

Although Swift and Styles broke up over nine years ago, it’s easy to understand why fans of both artists would make the “Daylight” connection, considering they’ve written songs about each other before. Swift’s 2014 hit “Style” is the most prominent example, but fans also speculate that “Out of the Woods, “All You Had To Do Was Stay,” “Wonderland,” and “I Know Places” from her Grammy Album of the Year-winning 1989 were also written about their relationship. As for Styles, many fans suspected that his 2015 deep cut “Two Ghosts” was a subtle response to “Style,” and he didn’t exactly deny it. “I think it’s pretty self-explanatory,” he told Radio 1 at the time. “Sometimes things change, and you can do all the same things, and sometimes, it’s just different.”

After their brief whirlwind relationship, the two proved they were amicable at the 2021 Grammys, where Swift was the first person to stand up and applaud when Styles won his first Grammy Award. Later on, cameras caught the exes speaking to each other, which sent fans into a frenzy — mainly because there was no audio of the moment. One Twitter user was able to detect that Styles told Swift, “It was nice to see you” and “Congrats on the album,” referring to Folklore, which won Swift her third Album of the Year trophy that night. Even though they’ve both moved on with new lovers and new albums, the Haylor shippers will never stop making connections between them.

More like this
Harry Styles Helped A Fan Come Out As Gay In Dramatic Fashion At His London Show
By Jake Viswanath
Taylor Swift Fans Caught A Possible ‘1989’ Clue In Her Latest Awards Show Speech
By Grace Wehniainen
Taylor Swift Explained The Ambiguous Ending To ‘All Too Well: The Short Film’
By Grace Wehniainen
Christina Aguilera Had A Mini "Lady Marmalade" Reunion With Mya At LA Pride
By Jake Viswanath
Get Even More From Bustle — Sign Up For The Newsletter