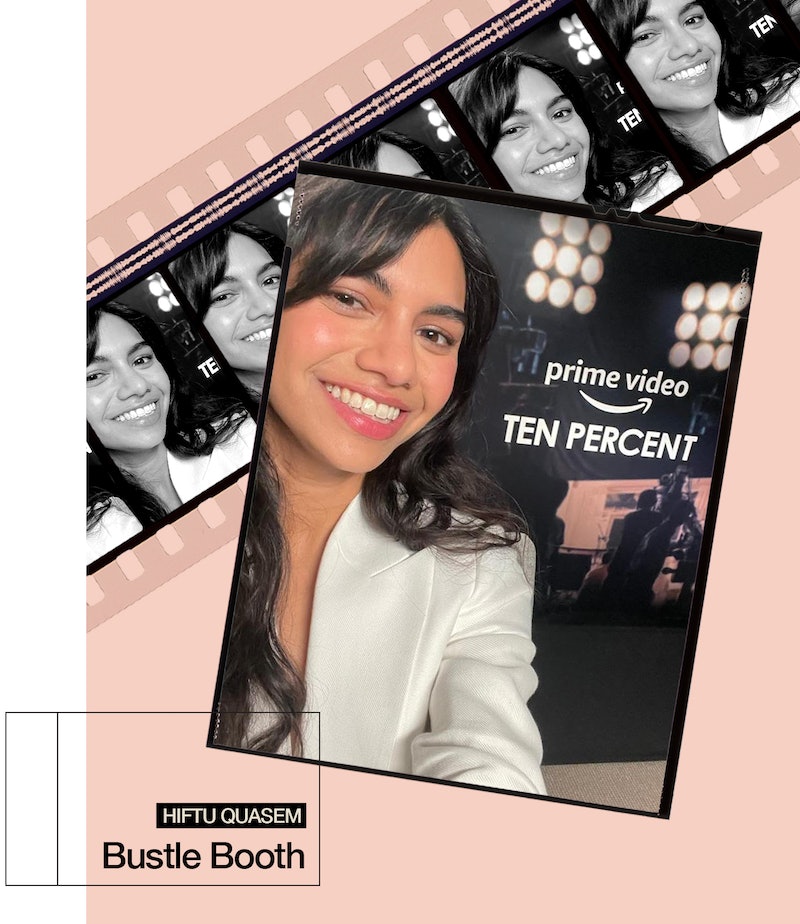 She’s now one of the break-out stars of Ten Percent – the hilarious new UK remake of French comedy-drama Call My Agent! – but hitting the silver screen was never really in Hiftu Quasem’s plans. Though the Scottish actor loved filming homemade videos as a kid, and would throw weekly Bollywood film parties with her family, she studied civil engineering instead before ending up as a researcher at BBC News. Strangely, she says, working in the high-pressure environment of a newsroom was the perfect training ground to prepare for the intense talent agency at the heart of her first major TV role.

“Journalism is extremely chaotic and can be quite cut-throat at times,” Quasem reasons, “and Misha experiences a lot of similar situations. I felt like I’d lived a version of this character and her journey, rocking up in London and not really knowing anyone, trying to fulfil what at the beginning feels like a pipe-dream.”

Though Ten Percent branches away from its original French inspiration – W1A writer John Morton injects the script with a dry humour, and a very British sense of awkwardness – the vague premise is the same. Following the mishaps of the talent agents working at the fictional Nightingale Hart, an old school London agency with a roster of demanding big-names to keep happy, Quasem plays Misha, an ambitious young film buff who dreams of breaking into a notoriously tough industry.

By chance, she’s handing in her CV at the exact moment that cut-throat lothario Rebecca Fox (played by Lydia Leonard) is firing her assistant for a minor transgression involving Phoebe Waller-Bridge and a birthday cake for someone called Maggie (in brilliantly casual fashion it later emerges that they’re talking about Maggie Smith). After cooly suggesting a solution, Misha lands a job at the agency, but it quickly becomes apparent that her ties to Nightingale Hart run deeper than first meets the eye.

If you recognise Quasem, it might well be from Killing Eve – she played a hotel receptionist in the episode that sees Villanelle and her old mentor Dasha going head to head at a Scottish golf-course. In Ten Percent however, she takes a leading role, starring opposite the likes of Jack Davenport, Maggie Steed, Prasanna Puwanaraja, and fellow Killing Eve alum Edward Bluemel. As in the original, a jaw-dropping array of huge stars make cameos playing exaggerated versions of themselves: Helena Bonham-Carter, Olivia Williams, Dominic West, and Emma Corrin, to name but a few. “I’d seen all these people performing for years, and to share an IMDb credit with them is just phenomenal,” she says. On a personal level Quasem also loved working closely with the side-splittingly funny Harry Trevaldwyn, who plays fellow assistant Ollie. His self-shot comedy videos have kept her (and let's face it, everyone else) going over the last two years.

Trevaldwyn would often catch Quasem’s eye on set at the critical moments where she was trying hard not to laugh. On a particular day of filming with Phil Dunster (Humans, Ted Lasso) – who makes a cameo in the show as a “diva soap star” – a fight scene called for the use of a body double. “We couldn’t stop corpsing,” she laughs. “One of the ADs [assistant directors] had to read Phil’s lines, and I had to perform with this body double, and he kept shrugging his shoulders every time the AD spoke. I was trying so hard not to laugh, looking around acting like a deer in headlights and then I caught Harry’s eye. That was the end of me. Make-up had to keep coming in to sort under my eyes.

“[Ten Percent] made me realise how much I’ve been shielded by my agent,” the actor concludes, reflecting on the fairly meta experience of playing a character she might usually work with as an actor. “I did briefly speak to my agent about some of the storylines, and they were like, mmm OK, similar things have happened.”

Get to know Hiftu Quasem better in the Bustle Booth, below.

London, Budapest, Glasgow, Carlisle, and Findhorn. Lots of 'thick clouds with gentle breezes'. I went to Budapest with some of my best pals recently and I'm about to head off to Glasgow for a shoot.

Strictly Come Dancing. I know it's technically not reality TV but I love dancing and I'd like to learn Latin dance.

‘Let it Go’. I performed it at an audition once... “performed” being the operative word here. I thought I could pull it off but apparently it wasn't meant to be. Probably because I am not a singer but again, I'd love to learn!