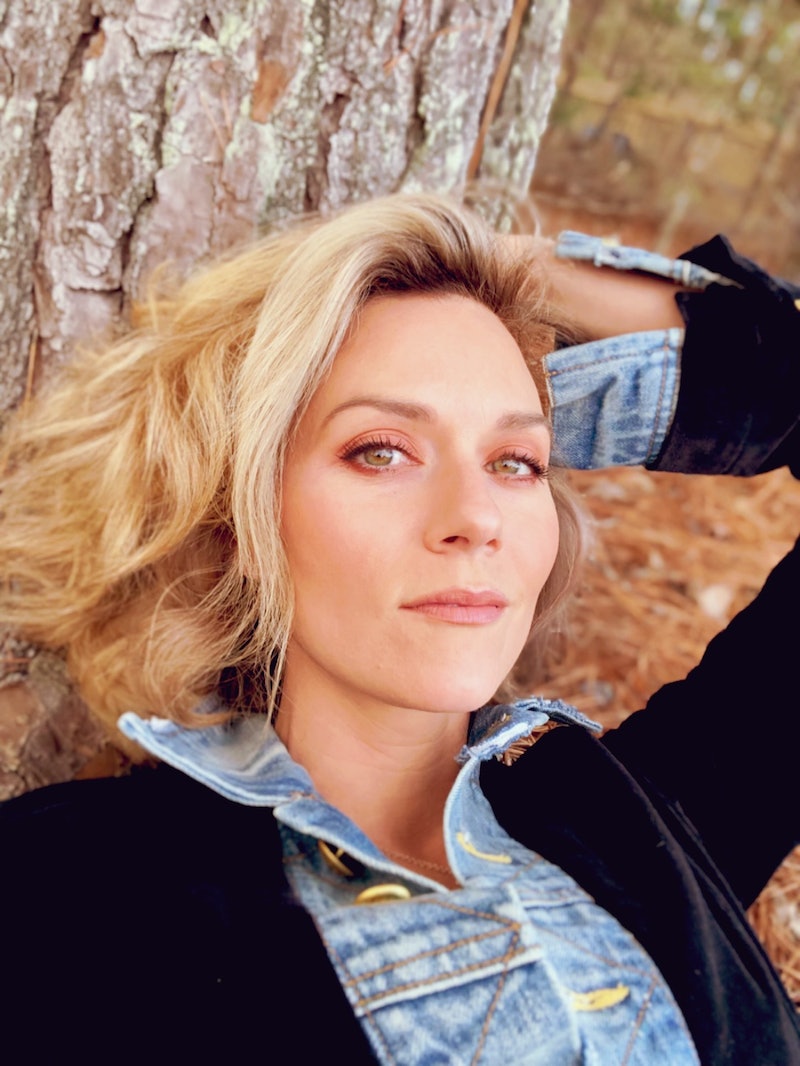 Between 2003 and 2012, Hilarie Burton Morgan was a de facto face of small-town America, even if her hamlet of fame was fictional. One Tree Hill, set in the titular North Carolina town, followed a teenage Peyton Sawyer (Burton) and her classmates in a bildungsroman-type drama. Over nine seasons on The WB and then The CW, Peyton’s insular community was ransacked by crime and tragedy to the point where it became a daily, almost comical fixture.

But since the show’s 2012 finale, Burton Morgan and fellow cast members have spoken about a toxic environment on set, and accused showrunner Mark Schwahn of sexual abuse and harassment. In her new iHeartRadio podcast with co-stars Sophia Bush and Bethany Joy Lenz, called Drama Queens, they talk about on-set advocacy, as well as more lighthearted subjects, like the low-rise jeans of Y2K fashion or on-screen chemistry. “We were so hungry for someone to guide and protect us that it was natural for the three of us to lean into advocacy as adults,” Burton Morgan tells Bustle.

This fall, the actress returned to small towns like her own — she’s a longtime resident of one in upstate New York — in True Crime Story: It Couldn’t Happen Here (Thursdays 10/9c) on Sundance TV and AMC+. Over the past year, she traveled around the country, from Georgia to Florida, in hopes of bringing attention to overlooked crimes in rural America.

“It’s been an incredibly odd year for me,” she says over Zoom. “I go from sitting with family members [of] someone who was murdered, and then come home to get on a Zoom with Sophia and Joy and talk about 2003.”

The six-part series was inspired by a close-to-home case: In 2017, Nikki Addimando shot and killed her partner, Christopher Grover, in Poughkeepsie, New York. She claimed she was acting in self-defense after years of physical and sexual abuse, but was sentenced to 19 years to life in prison. Earlier this year, her case was reduced to seven and a half years in prison under the Domestic Violence Survivors Justice Act.

At the time, neighbors came to Burton Morgan, asking for help raising awareness of Addimando’s case. The actor brought the story to Sundance TV and AMC+, thinking it’d be good fodder for a documentary special. The television groups had another idea: turning it into a series, It Couldn’t Happen Here.

In 45-minute episodes, Burton Morgan talks with those who’ve been impacted by crime and worked on the cases. Plotlines range from questionable DNA evidence that sent a man to prison on murder charges (Episode 1), to the story of a young woman fatally shot with her police officer boyfriend’s gun, which was ruled a suicide (Episode 3). “If we all team up, we can get so much done,” she says of her impetus for joining the show. She wants the subjects to feel respected, and that “our time is invested in hearing their story.”

Below, Burton Morgan talks about the slow-moving justice system, One Tree Hill’s disservice to fans, and where Peyton would be today.

Do you feel like this is a career change, from acting to hosting?

I tell stories, whether those are true stories or fictional. Our job is to shine a light on difficult subjects, [to] make it easier for people at home to have healthy conversations about them, whether they’re [from] Peyton Sawyer or It Couldn't Happen Here.

What types of cases did you look for on It Couldn’t Happen Here, and how do you find them?

A lot of the cases I'd heard about through local news, or Facebook, or people had DM’ed us about. Each case represents a different facet of our flawed system. There are episodes about racism, domestic violence, and ableism. Our last case is about a young Black woman who went missing, and she needed the same attention and fervor that Gabby Petito’s case had.

Based on your reporting, why is it difficult to administer just punishment in small towns?

In a small town, the problem isn't identifying the person who commits the act of violence. The problem is holding them accountable. [You’re] working within a system where everyone knows everyone. The sheriff went to high school with the perpetrator, [or] you see the perpetrator's family at the supermarket or at the little league baseball field. In a city, you have anonymity.

Do you think the judicial system can change?

I work in an industry where, literally after every take, a director comes up to me and says, ‘Hey, we can do better. Let's adjust.’ So coming from that business, which is all about adjustments, it's hard for me to look at the judicial world and not see those same adjustments.

Has your amplification of these cases changed the outcomes at all?

There are some that are definitely moving swiftly. [For] Devonia [Episode 1], the wheels were already in motion. Twenty years ago, he was accused of a murder he says he did not commit, and since then, DNA testing has shown that another man, who’s in prison for multiple murders, was at the scene. There was a change.org petition, which had around 4,000 signatures when our episode aired, and now it's up to, like, 20,000. We also have the Greg Lance case [Episode 4]. Two days ago, I got an email from one of the people involved, which was like, ‘There are things happening.’

What do you want viewers to take away from the series?

How much power we have as citizens. Empathy goes a long way in this kind of story. We're [also] working on a podcast, for which we can utilize the hours and hours of interviews we have. I think the public holds a lot of power, so let's give 'em the tools.

I find it inspiring how you’ve always used your voice, from standing up for yourself on One Tree Hill, to leaving Hallmark because they wouldn’t diversify their cast. Do you ever regret that?

It’s up to the people who have that privilege to use it. You burn some bridges along the way, and then they can be rebuilt stronger. But I don't ever regret saying the truth.

How did standing up for yourself on the set of One Tree Hill shape who you’ve become as an adult, and your friendships with Sophia and Joy?

I look back now, and I'm kind of horrified. I thought I was a grown-up at 20 years old, [but] I see this baby face, and can't help but think, ‘That's a child.’ I know the other girls feel this way as well. Once we all huddled up, and discussed our experiences, we realized, ‘Oh, they’re doing that to all of us. That's screwed up.’ What’s been really wonderful is that now we're working together, and producing together, and making decisions as a unit. There's no friction. There's no drama. Ironically we're the Drama Queens.

It’s good to be with those two. They’re a strong support network for me. In spite of that show, we’ve created really healthy work habits, and we value kindness, empathy, and communication in the workplace, all the things we lacked.

Where would Peyton Sawyer be today?

I hope she's in therapy. It was a huge disservice to women to have so many traumatic things happen to Peyton, and to never illustrate healthy ways to process them. The answer to every traumatic experience on our show was to get a boyfriend. If you could just kiss the cute boy, then the fact that someone tried to rape you would go away. And that's not the case.

Season 6 was the last time we saw Peyton Sawyer, as she happily drove off with Lucas and their baby. What sort of mom do you think she turned out to be?

She’d probably be really frantic about the dangers out there for her child. I hope that Peyton Sawyer, wherever she is, is modeling good, responsible adulting, and handling her own demons so that she doesn't pass on generational trauma to her daughter. That's my hippie-dippy answer.

More like this
The Indigo Girls Taught Me Queer Relationships Could Be Messy, Too
By Hannah Soyer
The 'Kenan & Kel' Reunion On 'SNL' Took A Dramatic Turn, Thanks To Keke Palmer
By Brad Witter
The First Trailer For 'That '90s Show' Includes So Many Nods To The Original Series
By Jack Irvin, Alyssa Lapid and Grace Wehniainen
Evan Peters Decompressed After 'Dahmer' By Watching This Will Ferrell Movie
By Grace Wehniainen
Get Even More From Bustle — Sign Up For The Newsletter