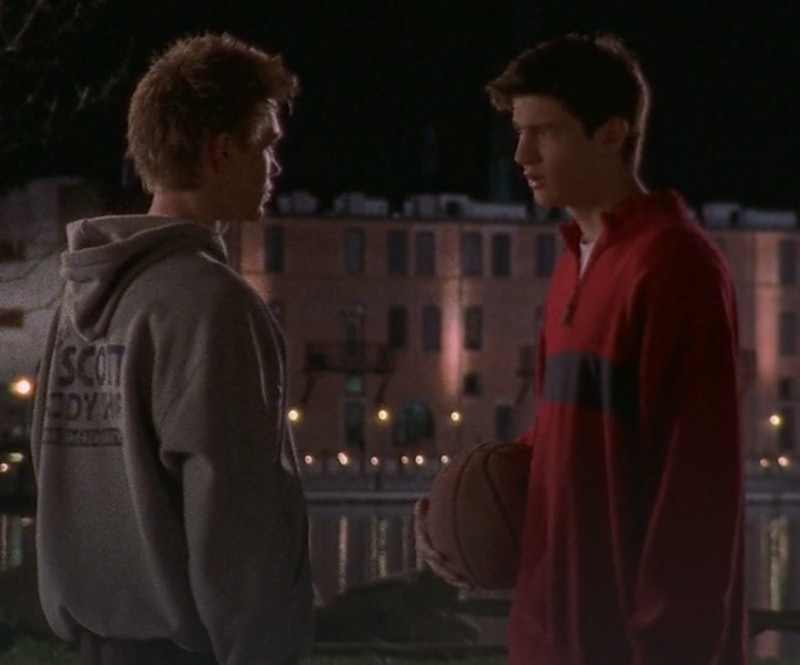 Any time Chad Michael Murray's shadowy silhouette crosses a sunlit bridge, hoodie up, basketball dribbled in hand, it can only mean one thing: A brand new episode of One Tree Hill is upon us. *Cue Gavin DeGraw's "I Don't Want to Be."* Even though true fans love the wild ups and downs of our favorite Tree Hill teens, who has time to rewatch every episode of One Tree Hill ? Unlike Lucas Scott's iconic quote about Peyton Sawyer being a comet in his life, a total rewatch of the CW series will not flash by as quickly.

Keeping that in mind, it's still necessary to know which of the nine seasons, 187 episodes are absolutely required viewing when doing a re-watch. You have to answer important questions such as: what was the state of the Lucas-Peyton-Brooke relationship drama during this season? Or was there an evil nanny or kidnapping plot that seemed to drag out for episodes on end? Maybe there's a super random celeb cameo ala Pete Wentz to sort of enjoy as a guilty pleasure? And if there's a wedding involved, it's a no-brainer, yes.

So, without further ado, here is a one-sentence guide for every season of One Tree Hill, ripe with basketball courts, dramatic declarations of love, and one too many stalking incidents.

Secret half-brothers Lucas and Nathan Scott are reunited when Lucas joins the high school basketball team, which Nathan is the star of—Nathan is dating Peyton, who falls for Lucas, whose best friend is Haley, who falls for Nathan while Peyton's bestie Brooke develops a crush on Lucas, too. (Say that five times fast.)

Nathan and Haley's teen-marriage begins to crumble as she goes out on a singing tour, while Karen (Lucas' mom) and Keith (Nathan and Lucas' uncle) decide to move on from their past love, with Keith's new relationship being secretly orchestrated by Dan (Keith's brother, the Scott boys' father) as the rest of the group takes turns dating each other.

Karen and Keith decide to give marriage a go, while Haley returns from tour to save hers; Brooke and Lucas begin a relationship and Peyton proposes to Season 2 love Jake, but Peyton and Lucas reconcile after a school shooting rocks Tree Hill, though the murder of Keith by Dan proves even more shocking.

Lucas writes a book in the shooting's aftermath, Dan tries to help Karen raise Keith's baby as he covers his tracks, and Nathan and Haley are preparing for their own child, despite their eventual money problems, but no one is having a rougher go of it than Peyton, who spends most of the season being stalked.

A four-year time jump shows Dan leaving prison, Peyton returning to Tree Hill after another breakup with Lucas, and Nathan & Haley recuperating after an evil nanny kidnaps their son and causes harm to the family, with every other character moving towards their adult futures.

Peyton and Lucas are finally on the same page with their wedding-and-a-baby happily ever after as Nathan pursues his basketball dreams, Brooke gets negatively pursued by the girl she fosters, and Dan's heart transplant gets derailed by a dog...enough said there.

Another two years pass as Brooke and Julian, who is adapting Lucas' book into a film, try to make a relationship work while a series of departures and arrivals happen: Lucas and Peyton ride off into the sunset as Clay, Quinn, and Mouth and Millicent's relationship move to the forefront.

Psycho Katie, a Season 7 addition, shoots Clay and Quinn in the most dramatic storyline of the season, while Julian and Brooke's love blooms despite her business troubles; Nathan and Haley have their second child.

Basically, the whole season is a search and rescue mission for Nathan Scott, who is being held for ransom, and the fallout affects everyone, which brings back some familiar faces to the show just in time for its series finale.

Whoo, probably not quite as many super dramatic left turns as you remember, right? This group has had enough kidnapping, stalking, and shooting incidents to last a lifetime. But, wherever these crazy kids are in 2019, there's no denying that there will only ever be one Tree Hill.

More like this
The Best 'Grey's Anatomy' Intern Moments, From MAGIC to Glasses
By Grace Wehniainen
24 Years Ago, 'Friends' Dropped Its Most Underrated Ross & Rachel Episode
By Grace Wehniainen
Netflix Reveals First Look At Wednesday In The 'Addams Family' Spinoff Series
By Bustle Editors
What Is 'Pretty Wild' Star Tess Taylor Up To Now?
By Morgan Leigh Davies
Get Even More From Bustle — Sign Up For The Newsletter