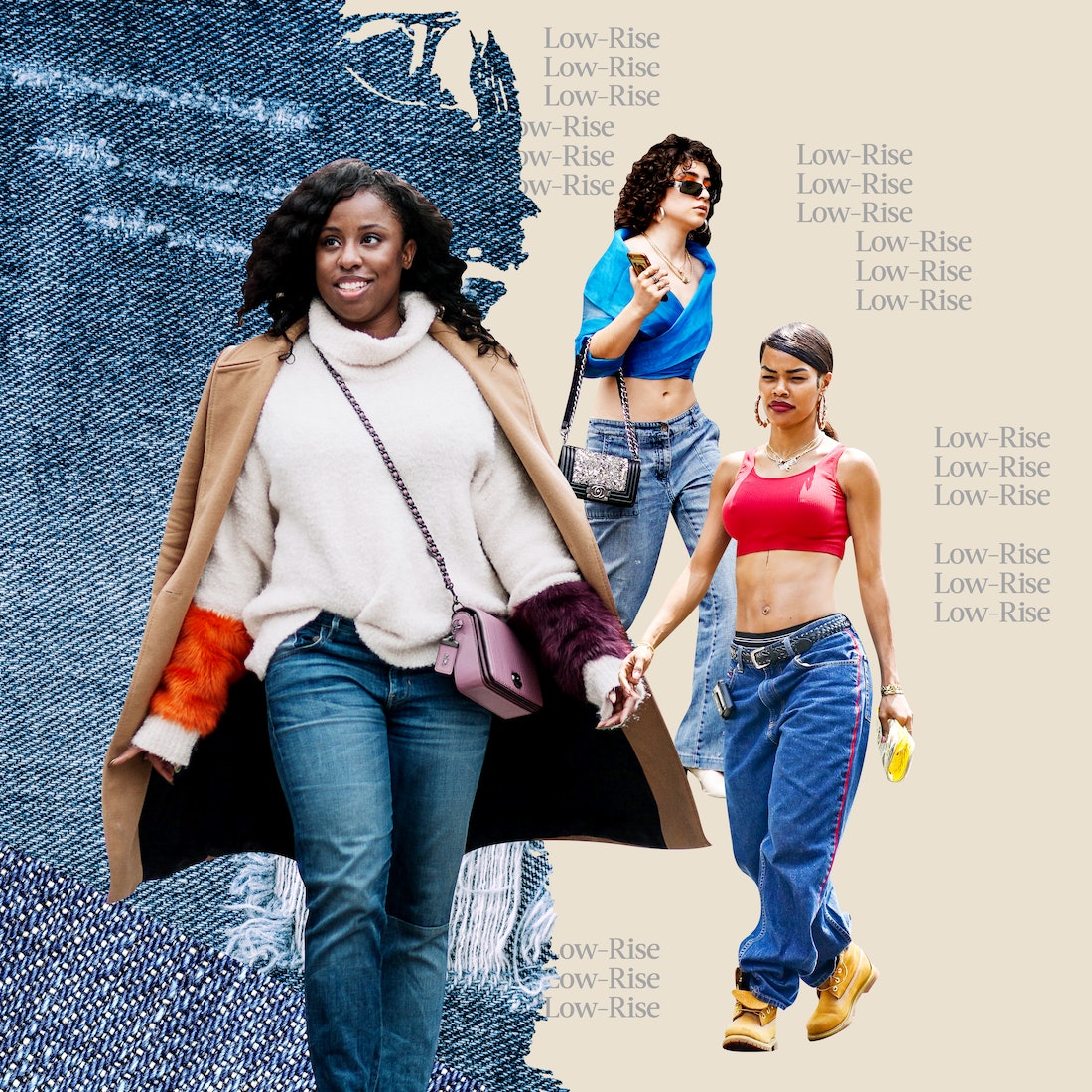 Of all the polarizing trends to emerge from the early 2000s — bedazzled jeans, trucker hats, belts worn inexplicably high around our stomachs — there is one trend I think many of us hoped would never return. No, I’m not talking about velour jumpsuits with logos stamped on the butt, but instead the equally questionable low-rise jeans.

That Y2K trends are having another moment is one thing, but why are we resurrecting the one denim trend that leads to whale tail or plumber’s butt? At first appearances, it looks like the celebrities are to blame. In June, Lady Gaga hit Paris Fashion Week wearing a pair of low-slung jeans with a blue blousy crop top, pointy toe boots, and a sparkly Chanel bag. A month later, Teyana Taylor stepped out in a red sports bra, a pair of Timbs, and low-rise jeans with her underwear peeking out ever-so-slightly above the waistline.

But it’s not just celebrities who are at it. In the last six months, searches for low-rise jeans jumped a whopping 91% on Lyst. The global fashion shopping platform also saw different variations spike, with flared, baggy, and skinny low-rise jeans trending, too. On TikTok, the hashtag #lowrisejeans has generated 60 million views on the platform, with #Y2KAesthetic garnering more than 310 million views. It’s official: Low-rise is back.

“[With] the newfound popularity of the Y2K aesthetic among Gen Z shoppers and TikTok users, it was only a matter of time before low-rise jeans made it into their wardrobes,” Morgane Le Caer, Lyst content lead, tells Bustle. “The question is: Will millennials embrace the trend most of us swore we’d never wear again?”

As a self-identified elderly millennial, I can confirm that fashion trends are even scarier the second time around. I once wore low-slung jeans religiously — in the carefree days of the early ’00s when I partied in NYC all night and somehow still found the energy to write all day. In halter tops, crop tops, and bra tops, I remember fully leaning into my “hot girl summers” long before Megan Thee Stallion coined the term. But as sexy as low-rise jeans were, they were also wildly uncomfortable to wear.

I was perennially tugging at them and inadvertently flashing anyone who was standing behind me. My grandmother and aunts were always telling me to pull my pants up, and then staring back at me with a look of utter confusion and dismay when I informed them, “Oh, no, this is how far up they go.”

I’d head out with a long sleeve crop top and jeans dragging at my ankles, with only my hip bones exposed. Can you imagine what the tan lines looked like? It was catastrophic.

Don’t get me wrong: I look back fondly at denim moments from the 2000s — Christina Aguilera’s whale-tail moment at the 2001 MTV Video Music Awards, Destiny’s Child with matching jeans and layered belts that held up literally nothing, Britney Spears wearing lace-up jeans covered in, of all things, pinstripes — but I harbor so much anxiety for the 2021 version of this trend.

And my impending dread begs the question: If low-rise jeans are so popular among Gen Z, why are they maligned by millennials?

One glaring answer is body positivity. As Vox reported back in April, for those who experienced the trend first time around, there’s the added discomfort of it calling back to an era when women were shamed for not having a size 0 or size 2 body. The unspoken rule was that you needed abs or at the very least, a flat stomach, for the style to be considered appropriate; muffin tops were unsightly, slovenly, and needed to be covered.

While I once threw on my low-rise jeans with abandon, I’m curvier in 2021 than I was in 2003. So what happens when you have full hips, #thicc thighs, a big butt, and a soft stomach? I was scared it’d be yet another trend that curvy women are cut off from — sending the message that only thin people can participate in fashion — but I was pleasantly surprised.

In fact, the new iterations of low-rise jeans are far more inclusive than their predecessor. As both Lady Gaga and Teyana Taylor prove, baggier styles are now the trend du jour, and you have more options than just fitted jeans to choose from. So, you can absolutely avoid a waistband that digs into your skin.

And no matter your size, you can wear low-rise jeans with a crop top like it’s 2005 — or not, says Stitch Fix Stylist Stephanie Valponi. “Typically, we are used to seeing crop tops for this Y2K flashback,” she says. “But if that’s not your style, have no fear. I recommend looking for a shirt length that is an inch past your waistband. You can tuck this in completely and opt for a wider belt as a statement piece.”

Scroll through TikTok and you’ll see several low slung jeans paired with T-shirts that hit right at the waistline, offering coverage only if you want it.

Here’s me wearing low-rise jeans with a whole sweater.

In essence, there are fewer rules this time around, and a lot more variety and freedom. Does that mean that I’ll pull a Teyana Taylor with a white bra top, a pair of Tommy Hilfiger boxers, and the low-rise baggy denim crossover of my ’90s/2000s dreams? Not likely. But at least now, I’ll have the option.