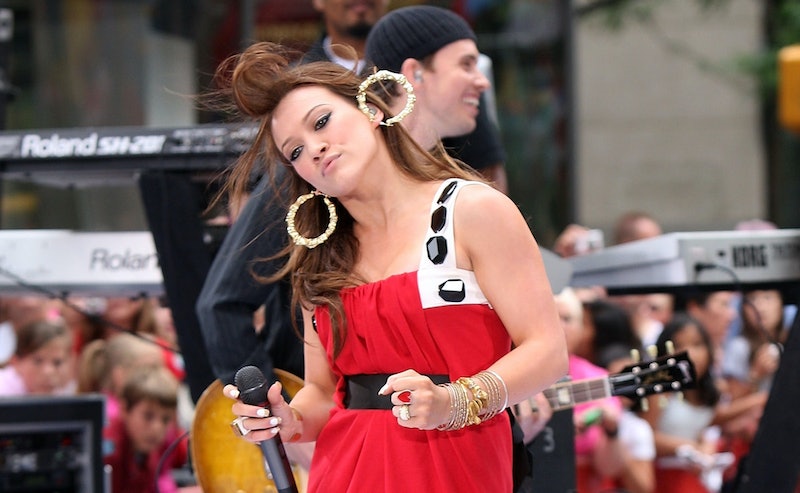 Hilary Duff has seen the TikTok videos of you mocking her performance of her iconic single “With Love” from 2007. But instead of clapping back, she’s embracing the viral trend, just like Lizzie McGuire would do. On Nov. 15, Duff recreated the viral “With Love” dance routine on TikTok, instantly outperforming most of her imitators in the process.

The trend started after fans re-discovered Duff’s vintage performances of “With Love” on The Today Show and other late night shows, during which the singer showed off some very interesting choreography that makes little sense to even her biggest fans. TikTok users started recreating the dance, pointing out its sheer hilarity in creative ways. As the routine went more viral, Duff became more aware of it and decided to join in on the trend — if only to shut her haters and imitators up. “So I can stop receiving texts about this,” she captioned her Instagram post of the video, complete with a peace sign emoji. “Also….. I Tik Toked….and it was a 12% kinda day.”

Duff stitched her TikTok clip with user @yungdaddykack, who tried the routine in October. What’s most impressive is that Duff low-key pulls off the moves better than she did 14 years ago. At the end of the video, the How I Met Your Father star whispered “you’re welcome” to the camera, knowing she was giving the fans what they want.

While “With Love” may be best known to Gen Z for that choreography, the song was actually a legitimate hit for Duff back in 2007. It served as the lead single for her 2007 dance-pop album Dignity and became her highest-charting song on the Billboard Hot 100 (yes, it even beat out “So Yesterday” and “Come Clean.”) The music video featured Twilight star Kellan Lutz as her hunky love interest and also doubled as an advertisement for her fragrance of the same name. A decade and half later, the song is still making an impact in unexpected ways.

More like this
Jennifer Coolidge Recites “Jenny From The Block” Beside J.Lo In Her First TikTok
By Jake Viswanath
Taylor Lautner Thought Taylor Swift's 2009 VMAs Interruption Was A "Skit"
By Alyssa Lapid
The Jonas Brothers' New Album Has A Very Meta Name
By Alyssa Lapid
Brad Pitt Wants To Share The Spotlight With This Celeb In Shania Twain’s “That Don't Impress Me Much”
By Alyssa Lapid
Get Even More From Bustle — Sign Up For The Newsletter
From hair trends to relationship advice, our daily newsletter has everything you need to sound like a person who’s on TikTok, even if you aren’t.