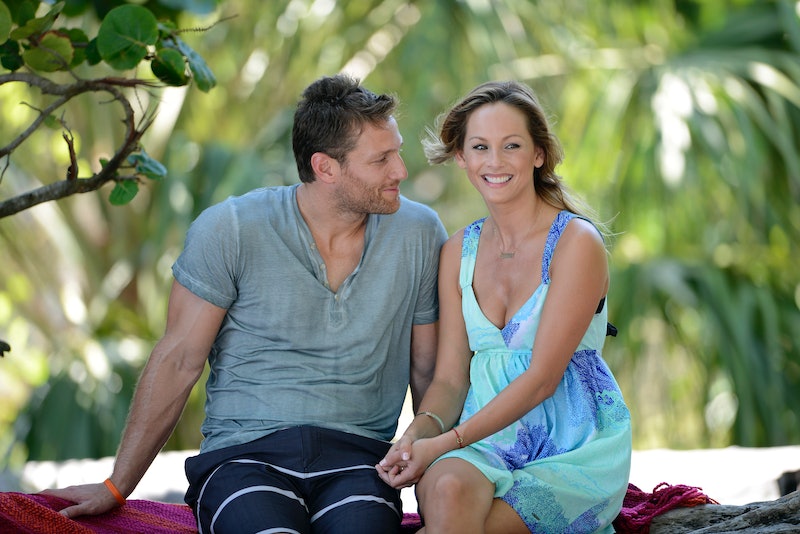 On Tuesday, Oct. 13, Clare Crawley's season of The Bachelorette will finally begin. But before you watch her find love, you need to stream Juan Pablo Galavis' season of The Bachelor. The eventful Season 18, which aired in 2013, is notable for being Clare's introduction to Bachelor Nation, and for having one of the most memorable final rose ceremonies to date. Luckily for fans, ABC has made it easy to revisit the Juan Pablo era before The Bachelorette Season 16 kicks off in October.

Over the summer, ABC aired a portion of Season 18 as part of The Bachelor: The Greatest Seasons Ever! event. While a Chris Harrison-moderated refresher is always fun, Juan Pablo's season is now streaming in full on Hulu. That means viewers can relive the moment that Clare told Juan Pablo that she would never want her children "having a father like you" during the final rose ceremony, and everything that led up to her glorious kiss off to the less than stellar Bachelor leading man.

By the end of the season, Juan Pablo declined to propose to his final pick Nikki Ferrell (or, you know, even say he loved her during the After the Rose ceremony). The pair split in October 2014, after dating for just a little over six months, per E! Online. It was, to put it mildly, a highly controversial season of The Bachelor, but ultimately, the best reason to watch Juan Pablo's season has nothing to do with his search for love, and everything to do with getting a feel for Clare.

Given the rumors surrounding Clare's season of The Bachelorette, she could be set to serve up another unforgettable franchise moment. Rumors are swirling that midway through the season, the 39-year-old stopped filming because she fell for one of the contestants and didn't want to lead the other men on. There are also reports that the second half of the season will feature Tayshia Adams as the Bachelorette instead. ABC is keeping mum on the reports for now, but host Chris Harrison recently teased on Instagram that Season 16 will be "twice as good" as anything that's come before.

With Clare at the helm, viewers are right to expect the unexpected. The Bachelor Nation alum has made it clear that she's ready to find love, and if you need a reminder of how serious she is about being on the show for the right reasons then all you have to do is stream Juan Pablo's season on Hulu for the ultimate refresher.

More like this
'Bachelor' Star Cassie Randolph’s Sister Is In The 'Yellowstone' Spinoff '1923'
By Grace Wehniainen
Bachelor Zach’s “Dream Job” Has Nothing To Do With His Work In The Tech Industry
By Brad Witter
'The Bachelor' 2023 Schedule Differs From Last Season In 1 Key Way
By Grace Wehniainen
Hannah Ann Got Engaged 3 Years After 'The Bachelor' & The Proposal Was Dreamy
By Grace Wehniainen
Get Even More From Bustle — Sign Up For The Newsletter
From hair trends to relationship advice, our daily newsletter has everything you need to sound like a person who’s on TikTok, even if you aren’t.