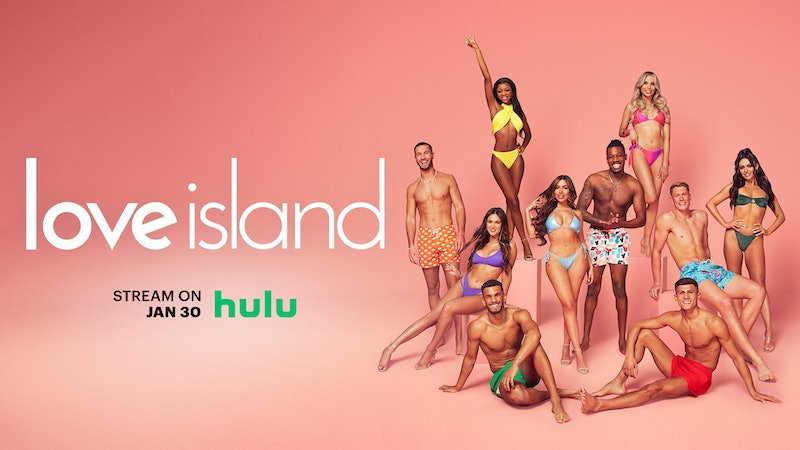 This winter, Love Island Season 9 is back with all the romance, drama, and getaway vibes you need to hold you over until the show’s summer flagship returns later this year. But U.K. viewers got first dibs on all the island drama, with daily episodes beginning on Jan. 16. If you’re in the United States, you’ve had to wait just a little longer to take your virtual visit to the Villa.

However, that’s not unusual. If you’re a devout fan, you may be pretty used to the viewing delay by now. Based on past seasons, we know that Hulu has aired Love Island episodes for stateside viewers two weeks after they drop across the pond. And the same holds true this time around! Bustle can exclusively confirm that winter Love Island episodes will debut on Hulu on Monday, Jan. 30. You can expect daily episodes, with the weekly Aftersun recap airing on Sundays.

Before its January return, winter Love Island caught attention for some changes to the game — namely, keeping contestants offline while they’re taking part in the show. “As part of extended measures to protect both the Islanders and their families from the adverse effects of social media, participants will be asked to pause handles and accounts on their social media platforms for the duration of their time on the show,” ITV wrote in a release.

The same ask goes to their friends and family, so you likely won’t see anyone posting on behalf of your favorite contestants while they’re at the Villa. However, you can still get to know the lineup of contestants before the show.

If you’re new to the world of Love Island, there may be some confusion as you search for the latest season — which is understandable because there are a lot of Love Island shows out there! As a reminder: Love Island USA is a separate series with its first three seasons streaming on Hulu, and its fourth and future seasons are available on Peacock. On the other hand, both the summer and winter Love Island UK seasons follow the staggered international release model.

Despite the wait, it’s worth keeping up with the original series as a U.S. viewer because it’s the buzziest; in fact, last season was the show’s most-viewed yet, according to the Daily Mail.

More like this
Twitter Is Saying The Same Thing About 'Love Island'
By Sophie McEvoy
'Love Island’s Kai Fagan Is Very Clear About What He Doesn’t Like
By Sam Ramsden and Darshita Goyal
This Pre-'Love Island' Video Of Olivia & Zara Together Changes Everything
By Bustle UK
Twitter Can’t Get Over Stormzy’s Surprise Cameo On Winter 'Love Island'
By Sophie McEvoy
Get Even More From Bustle — Sign Up For The Newsletter
From hair trends to relationship advice, our daily newsletter has everything you need to sound like a person who’s on TikTok, even if you aren’t.