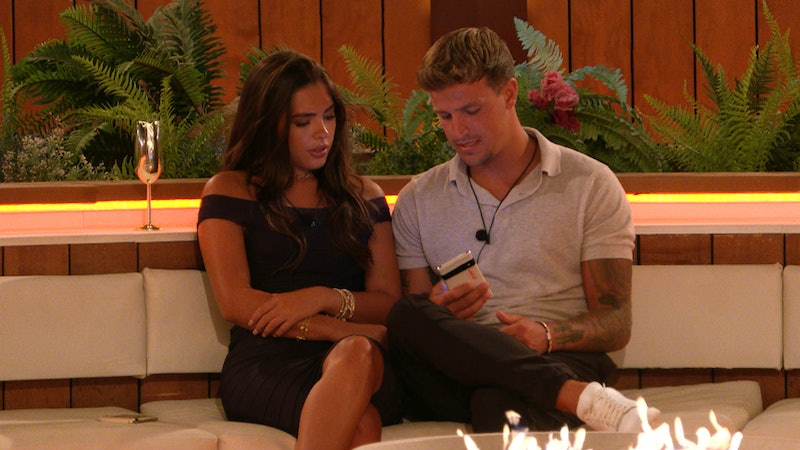 Ekin-Su and Davide have been crowned and Love Island may be over for another year (well, until the winter version anyway), but the drama hasn’t stopped. If anything, it’s that much messier and more chaotic on the outside. Not only have we seen the Love Island cast members throwing shade at the recent reunion, but there’s also been videos mocking one another doing the rounds and of course, the drama of following and unfollowing on social media. The power of the unfollow, eh? And so, who is following who these days? Here is a deep dive into the Love Island 2022 cast and who they’re following, and more importantly, not following on Instagram...

If you’ve watched the reunion episode, you’ll have had a taste of the drama developing outside of the villa, specifically: Coco Lodge, Summer Botwe, and Josh Le Grove. Of course, Summer and Josh left the villa together and have been on a few dates on the outside, but that didn’t stop Coco making certain comments on the Saving Grace podcast, claiming that she and Josh “could’ve slept together” after being dumped from the villa. It’s safe to say this didn’t go down too well at the reunion and, to no one’s surprise, Summer and Coco both don’t follow each other on Instagram. Josh still follows them both.

Before we dive in here’s a quick debrief on non-finalists. Special shout out to Danica Taylor who still follows all of her fellow Islanders, including the majority of the bombshells. Billy Brown follows most of his cast members, including Gemma Owen and Luca Bish, but doesn’t follow Jacques O’Neill or Dami Hope.

Speaking of bombshells, after Nathalia Campos and Ekin-Su Cülcüloğlu had it out pancake style on the show, it appears they’re on good terms as they both still follow each other. But the Brazilian bombshell doesn’t follow Adam Collard, Davide Sanclimenti, or Paige Thorn. Fans think the Paige situation may be related to recent comments Nathalia has made on the podcast Reality With Will Njobvu, where she claimed that Paige had made some “mean girl comments behind my back.” Summer also doesn’t follow Dami, Paige, or Ekin-Su on social media.

Remi Lambert still follows some of the boys from his time in the villa — Andrew Le Page, Dami, and Davide included — but as to be expected, does not follow Luca or Jacques. (More on that later.) And amid all the controversy, Jacques still follows Paige but has recently unfollowed Tasha Ghouri and Andrew, and doesn’t follow Gemma Owen, Adam, or Remi on Instagram.

Paige seems to have returned the favour in that she also still follows Jacques and most of the Love Island gang, with the exception of Summer Botwe. (More on that to follow, too.) And of course, Adam doesn’t follow Jacques either. And so, onto the finalists...

A season 8 OG, Tasha coupled up with Andrew early on in the series and apart from a few bumps in the road (and that Casa Amor moment), the pair made it to the final and are still together. Tasha didn’t exactly appear to have it easy in the villa as viewers regularly voiced their concerns of misogynistic behaviour and bullying from some of the boys, especially Luca and Dami.

However, Tasha still follows them both on Instagram and has been pictured with them since the end of the show, namely Dami, who was a part of her birthday celebrations on Aug. 11 along with Andrew, Indiyah, Paige, and Adam.

Interestingly, Tasha has recently unfollowed Jacques on Instagram after a leaked video showed him mocking Tasha. She also doesn’t currently follow Coco — which makes sense after that Casa Amor debacle — and Nathalia.

Another OG, Andrew follows most of his fellow Islanders on Instagram apart from Billy, which could be related to the fact Tasha coupled up with Billy during Casa Amor, but that’s just us speculating, TBH. A move that was likely to be in support of girlfriend Tasha, Andrew also unfollowed Jacques on Instagram recently after the leaked video and has been praised by fans for being a “supportive” partner and the pair have been dubbed an “unproblematic couple.”

Originally paired with Ikenna Ekwonna, Indiyah quickly realised that her and Dami were gravitating towards each other and the pair coupled up in the third week of series 8. Indiyah and Dami made it all the way to the final (again, not without the standard Casa Amor drama) and came in third place. As you’d expect, especially as a firm fan favourite, Indiyah has grown her Instagram to 870k and counting, and still follows the vast majority of her fellow Islanders including Summer, Deji, Remi, and Ikenna.

Well, you can’t say that Dami didn’t bring the drama to Love Island. Another original member of the cast, Dami was initially coupled up with Amber Beckford but, as mentioned, ended up recoupling with Indiyah in the first few weeks of the show. And then Casa Amor came around, and he decided to “explore the connection” with Summer giving us the pretty cringe line of “Summer’s not over.” Well, it was over pretty quick and Dami began pursuing Indiyah once again as soon as everyone was back in the villa together.

Gemma and Luca quickly fell into suit together and are one of the long lasting couples of series 8, even when producers threw her ex, Jacques, into the mix. But rumours are now circulating that the pair have secretly split up behind the scenes, even though they are both still posting about each other on their social media and currently appear to be on holiday together. The pair were runners up to Love Island winners Ekin-Su and Davide but have not been without their controversy, which mainly stemmed from Luca’s “protective” behaviour towards Gemma.

Gemma has already amassed 1.9 million followers on Instagram and still follows the majority of her Love Island pals. But someone she doesn’t follow is Jacques, but I guess most of us probably don’t follow our exes on social media.

An Islander who was accused on a number of occasions of bullying, misogyny, and problematic behaviour by viewers, Luca was still a finalist on this series with partner Gemma. But it seems his behaviour isn’t just confined to the sunny walls of the villa, as he was recently a part of an Instagram Live with Jacques — a bromance that Gemma must be thrilled with — where they appeared to be mocking fellow Islander Remi and his rapping.

Remi has since accused Luca and Jacques of bullying him during his time on the show and posted on Instagram: “Everyone said I lied about the way I was treated in that villa, but this here is an example of what was going on whilst I was in there.” He also added that there were a number of unaired arguments, which has also recently been backed up by Amber, per The Mirror.

On Instagram, Luca still follows most of the Love Island cast, including Remi and Tasha.

The queen of Love Island, Ekin-Su won over Davide’s heart and the nation’s heart this summer. We all loved this couple so much that we voted them our winners with 63.69% of the vote. And this is most certainly reflected in the following Ekin-Su has now built up on Instagram with a huge 2.7 million, and counting.

As it appeared that Ekin-Su got along with most of her fellow Islanders, it’s probably not that surprising that she follows most of them on Instagram. Yes, even Nathalia. However, she doesn’t follow Summer, Reece, Jamie, or Josh.

The other half of the winning couple, Davide certainly made his mark on this year’s Love Island, coining many a term, including “you’re a liar an actress” — which were usually reserved for Ekin-Su. I mean, you definitely can’t say that this a couple that doesn’t have passion (and drama). And since winning the show, Davide and Ekin-Su appear more loved up than ever whilst doing Love Island promo, regularly posting together on their Instagram Stories showing their travels, date nights, and of course, gym sessions together.

Davide has also amassed quite the following on social media with 1.8 million followers on Instagram and also follows the majority of the other Love Island cast members. But he doesn’t follow Billy, Reece, Lacey, or Nathalia.

More like this
Molly-Mae Hague & Tommy Fury Celebrate Pregnancy Reveal In The Sweetest Way
By Sophie McEvoy and Sam Ramsden
How To Get Tickets To 'Strictly Come Dancing's Live Tour
By Sophie McEvoy
Bimini, Tia Kofi & More React To Cherry Valentine’s Death
By Catharina Cheung
15 Piping Hot Behind-The-Scenes Secrets From 'Great British Bake Off'
By Emily Dixon and Darshita Goyal
Get The Very Best Of Bustle/UK