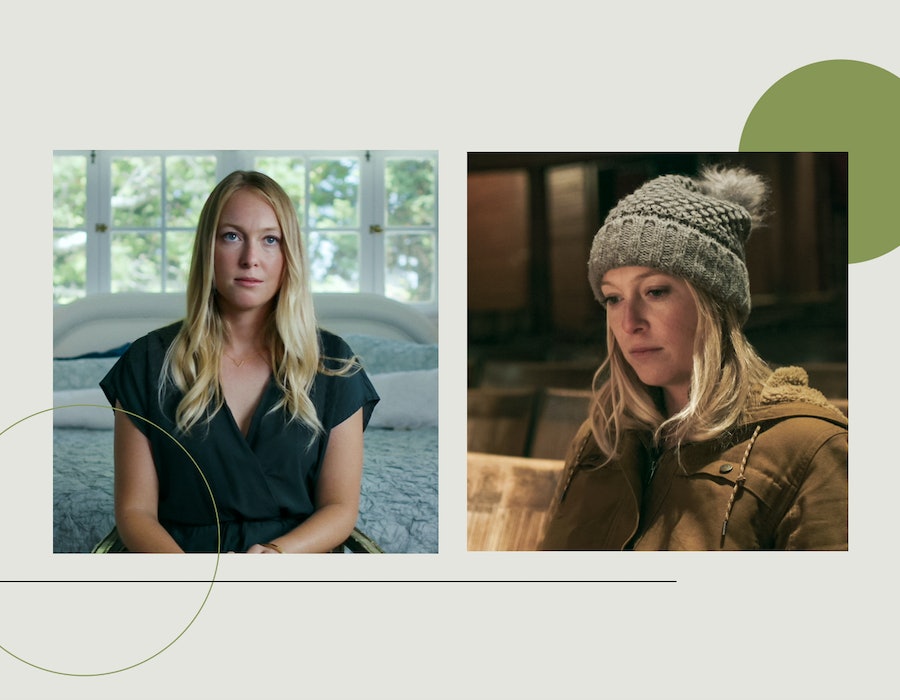 Everything you know about India Oxenberg you've likely heard from someone else. From her mother, Catherine Oxenberg, who launched a public crusade to get her out of the NXIVM cult. Or from the former NXIVM members featured in HBO's The Vow, which chronicles the rise and fall of the so-called self-improvement group Oxenberg joined when she was 19. But nearly 10 years later, Oxenberg is finally ready to tell her own story.

"For a very long time I didn’t want to tell my story at all," the 28-year-old tells Bustle over Zoom. "I thought about just running away to the countryside with my then-boyfriend [and now-fiancé Patrick D'Ignazio] and just trying to forget NXIVM and move on completely. But I realized very soon on that avoiding these things doesn’t make them go away. They haunt you in other ways."

With the help of filmmakers Cecilia Peck and Inbal Lessner, cult experts Rick Alan Ross and Janja Lalich, and a few fellow former NXIVM members, Oxenberg made Seduced. Throughout the four-part Starz docuseries, she recounts her time in NXIVM and DOS, the women-led subgroup accused of branding and blackmailing its members as well as coercing them into having sex with NXIVM founder Keith Raniere. (Raniere was convicted on charges including sex trafficking and forced labor conspiracy, but has asserted he's innocent and plans to appeal his conviction).

Below, Oxenberg reflects on the painful experiences she revisited for the show, her relationship with her mother after years of strain, and what she thinks of DOS leader Allison Mack now.

Why did you decide to tell your story with Seduced?

I took about six months [after leaving NXIVM] to really focus on [healing], and I just wasn’t ready to talk. There were things that just wouldn’t come out of my mouth when I was trying to communicate them because I was so scared. And then when I finally started to feel a little bit more clear about what happened to me over the past seven years, I began writing. That's [what] started to open up things for me, and then I was introduced to Cecilia and Inbal.

They really wanted to focus on education — specifically around coercion and abuse — and what it takes for someone to leave [those situations] and be in these high-control groups. I thought, 'That’s a mission I can get behind. That’s a mission that I would feel good about putting my story to.' So I said yes, and we went on this year-long journey together, going back in time trying to figure out and deconstruct what actually happened in NXIVM and what NXIVM really was. It was important for me to be transparent and honest [about my experience], because I think it’s so easy for us to look the other way when things are uncomfortable.

"It was sort of like jumping into a cold pool of water and thinking, 'I don’t want to be afraid of this.'"

In the series, you visit NXIVM's Albany headquarters for the first time since leaving. What pushed you to return, and what was that experience like?

I actually thought I would never have to go to Albany again, but I realized it was a journey I had to embark on. I think I said it in the series, but it was sort of like jumping into a cold pool of water and thinking, "I don’t want to be afraid of this." We were going back to basically the place where this all began, and the energy of that and having to confront that was very difficult. It was more taxing on me physically than it was emotionally because I couldn’t really let myself connect to those emotions fully and [still] work. When I was done [filming], I would go back to the hotel or the Airbnb that we were sharing and just cry because it was so much to process.

Were there any conversations that you had when you were making the series that surprised you or gave you a different perspective?

Yeah, embarrassingly, too many. The major reveal for me was the level of misogyny that was within the group, because I had become so used to that kind of abuse, and even just the tone and terms and the way that women were meant to see themselves as the weaker, inferior sex. That really disturbed me to see how I had let myself be involved in that.

Although it’s not really that you let yourself be involved in that. You’re coerced into a situation like that. We want to think that we will stand up to any injustice when we’re confronted with it, but the reality is that given the circumstances and the amount of pressure of indoctrination and grooming and all of that, we weren’t able to make sound decisions. Especially with DOS, [there was] sleep deprivation, food deprivation, stress, collateral — we were not in our right minds.

"Not to be crass, but that really f*cked me up for a couple days."

Seeing your relationship with your mother and how you've rebuilt that bond is a really powerful part of the series. Was it hard to look back on these moments when you were estranged?

That’s something that we’ve had to work on together, just rebuilding our trust. I feel closer to my mom now than I ever have in my life because we have such a different level of respect for each other and what we went through. I’m so lucky that I have that with her again because for a long time, I didn’t think I’d have that kind of relationship at all because of what was going on in NXIVM. We’ve come a long way and we’ve grown a lot together.

She says at one point in the documentary that she feels responsible for introducing you to NXIVM in the first place. Did you ever blame her?

No. I mean, I blamed her while I was inside the group, but that’s because that narrative served them. [But] the real truth is, to me, we went [to the NXIVM classes] together. So I don’t feel like my mom took me there and I don’t blame her and I don’t feel any resentment about that.

There are a number of other former NXIVM members who share their stories in Seduced. Have you remained close with anyone you met in NXIVM?

I have a close group of friends who have left. There’s something to be said about going through tough times with people, and it really does bond you. Some of these women are some of my best friends, and we really get each other. It's a relief when you don’t have to explain yourself and you can just be with someone and share and they’re like “I get you, it’s OK.”

Have you seen the videos of people dancing outside of the Brooklyn detention center where Keith Raniere is being held? What are your thoughts on that?

Not to be crass, but that really f*cked me up for a couple days. I felt very triggered and very upset because some of those women, specifically some of the women who spoke [in support of Keith] on CBS, I was really, really close to. So to see them still loyal and demonstrating this loyalty through dancing in front of the prison was so disturbing to me because all I wanted to do was just grab them and shake them and say, "He doesn’t give a sh*t about you!" This is literally him playing mind games because he likes to control people and see what he can get them to do. But I remember what it was like to be them, and to feel like the world is against you and that nobody understands you. To me, it’s just really sad that they don’t want to see the truth.

"That’s just one of the horrible things that Keith does, he perverts the most beautiful things about people."

One of those people, Nicki Clyne, was on the tapes that you play at the end of Seduced planning out DOS and its rules with Allison Mack and Keith Raniere. How do you feel about Nicki and Allison now, since you were so close with them?

There’s so much that I’ve learned that I didn’t know, and so many lies that were concealed, that even at the very end of trial I was learning things that I didn’t know about NXIVM. So I was shocked and I felt betrayed because I trusted these women a lot. That’s just one of the horrible things that Keith does, he perverts the most beautiful things about people. Friendships, women’s friendships, the trust that people had, it all gets tarnished because ultimately it comes from a predator, and that’s what he is.

It’s so hard because the government decided [that there are] victims and perpetrators, and they made a very clear determination of what that was. For me to see someone like Nicki — who I don’t see as very different from Allison — still freely out there conducting herself, that’s scary for me because she’s the ringleader in a lot of ways of what is remaining of NXIVM. [Editor's note: Nicki Clyne has not been charged in any NXIVM-related crimes; Allison Mack pled guilty to racketeering and racketeering conspiracy charges in 2019].

I read that you're planning to speak at Keith’s sentencing.

I’m going to need to sedate myself the night before that. Like, "Wine, thank you." [laughs]. I’m nervous and I’m still working on my victim impact statement, [but] I just want that closure and I want to know that when I leave, he is staying, and I get to go, and we’re all OK. That’s why I want [him to receive] life in prison, because I know that this man will never stop doing what he does.

How would you respond to people who think, “Oh, this would never happen to me, I would never join a cult"?

When people say that, at first I used to be super offended. But it’s really more about the fact that they’re just not informed. If you’re informed, you’ll realize that anybody can be susceptible to manipulation depending on where they are in their lives.

Maybe you just lost your job, changed careers, moved to a different state. Maybe you’re alone because of COVID and [are] talking to someone on the internet. [If you're in any kind of transition period,] you are vulnerable to manipulation and nobody is really exempt from that. So I hope that the show demonstrates that it could be anybody. It has nothing to do with intelligence. It’s more to do with vulnerabilities and the fact that masters of manipulation exist and we need to be vigilant and aware of that. Don’t pretend that it’s not out there, because that’s exactly the thing that I did, and look what happened.