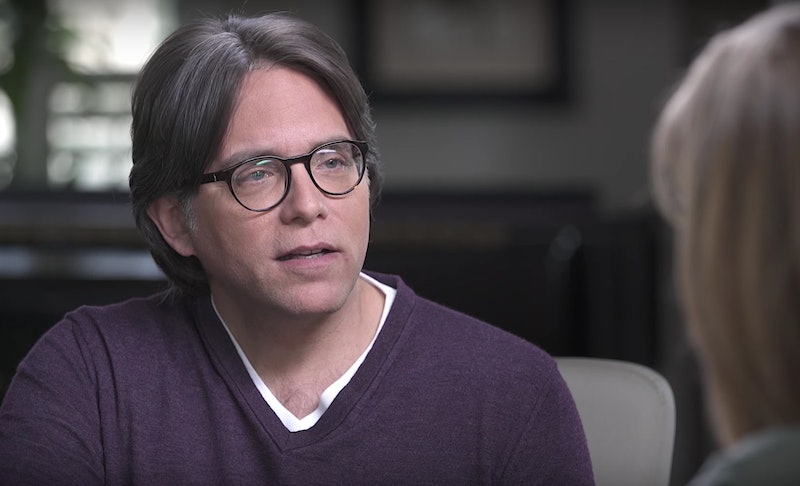 Despite accusations of running a "sex cult" and being convicted on charges that include sex trafficking, forced labor conspiracy, and racketeering, NXIVM founder Keith Raniere maintains that he is innocent, though he did apologize for his role in the "pain and suffering" that the scandal involving his organization has caused. Raniere — who could receive life in prison at his sentencing on Oct. 27 — gave his first interview since his 2018 arrest, and told NBC News that he believes he has been wrongfully convicted.

"Yes, I am innocent," Raniere told Dateline, adding that he plans to appeal his conviction and ask for a new trial. "And although this is a horrible tragedy with many, many people being hurt, I think the main thrust of this has been the oppression but really a different issue, which is hard for me to express. There is a horrible injustice here. And whether you think I’m the devil or not, the justice process has to be examined." In the interview, he accused the prosecutors of misconduct, tampering with evidence, and "scar[ing] away witnesses" that could have supported his defense.

Raniere first made headlines in 2017, when several former members of NXIVM accused the "self-help" group of sexual harassment, abuse, trafficking, and cult-like behaviors. The most shocking of the allegations surrounded DOS, an all-female subgroup that blackmailed and branded its members and forced them to have sex with Raniere. He and several high-ranking members of the group were arrested the following year, and while most of them — including NXIVM President Nancy Salzman and former Smallville star Allison Mack — pleaded guilty, Raniere has continued to maintain his innocence, and accuse his enemies of conspiring against him.

"You know, one of the things that’s most important in our country is the justice system," Raniere said in the interview. "Both the devil and a saint should be able to get the exact same treatment under our justice system." His claims that he didn't receive a fair trial is backed by NXIVM members who remain loyal to him; they have even filed a petition claiming he was the victim of "prosecutorial misconduct" and asking for the prosecutors to be investigated.

Despite all proclamations of his innocence, Raniere did tell NBC News that he is "sorry" for the role he played in the entire scandal. "I apologize for my participation in all of this–this pain and suffering," Raniere said. "I’ve clearly participated. I’ve been the leader of the community. And it has come to this. Even if it is by oppression, I am absolutely sorry and pained. This is a horrible situation."

Many of the people who did experience the "pain and suffering" that came with being a member of NXIVM, however, have stated that they hope to see Raniere receive an appropriate punishment for his actions at his sentencing. "[Keith is] a master at manipulation," India Oxenberg, a former member of NXIVM and DOS, who shares her story on the Starz series Seduced, told Good Morning America. "If there's one thing he's intelligent at, it's that. And he's a predator."

Raniere will be the second high-ranking NXIVM member to be sentenced for their involvement in the organization; on Sept. 30, heiress Clare Bronfman was sentenced to 81 months in prison after pleading guilty to charges related to identity theft and immigration fraud. Bronfman was also accused of using her considerable wealth to recruit people into NXIVM, financially support Raniere's projects, and harass and silence anyone who spoke out against him or the organization. Her sentencing, as well as Raniere's trial and sentencing, will be chronicled on HBO's The Vow: Part II, which is set to premiere next year.