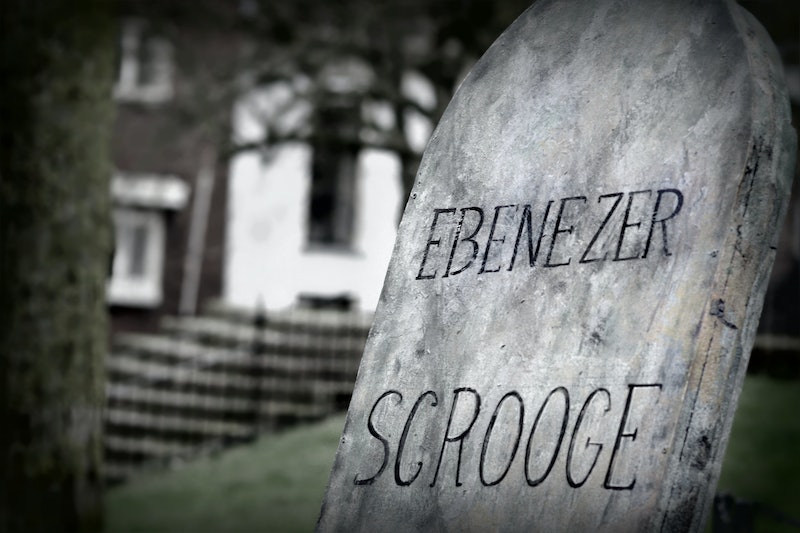 Charles Dickens’ A Christmas Carol is one of the Yuletide’s most beloved and celebrated tales. It’s an old-timey ghost story with thrills, chills, and a bunch of real talk that has stood the test of time — to the point that A Christmas Carol adaptations are still being made today, including an upcoming musical comedy starring two of your favourite funny actors (more on that later). But for all its cultural impact, is A Christmas Carol a true story?

Well, TBH, it’s not actually based on anything in particular. However, the character of Ebenezer Scrooge and the dire straits of the poorest people living in the city of London at the time drew from real people and places. Scrooge is believed to be based on two different men. The first potential origin story is a deceased merchant named Scroggie who was noted in Dickens’ notebook as a sad and mean individual. Dickens had the idea for the character after he misunderstood the merchant’s gravestone during a jaunt around Edinburgh’s Canongate Kirkyard, according to BBC Arts.

Another potential inspiration for the character is the famously miserly John Elwes, according to the Telegraph. Despite being enormously wealthy, Elwes relished living that skinflint life — reportedly rationing the likes of heating, candles, and even choosing the old-fashioned equivalent of supermarkets’ yellow-labelled food. Yep, he even ate food that was going rotten, per the Telegraph.

Time reports that the tale’s other characters, Tiny Tim and the rest of the Cratchit family, are based on an issue that was very close to Dickens’ heart. In his work, he made no secret of his feelings towards the poverty that was engulfing the lower classes in Victorian London and across the United Kingdom. He was reportedly horrified by not only the ridiculous hours and dangerous environments workers were expected to endure, but also the abuse of young children who were used for their cheap labour, with little or no regard for their safety and well-being.

Dickens was heavily inspired by a collection of interviews with child workers that had been compiled by a journalist friend, according to Time. He used A Christmas Carol to show the injustices experienced by the poorest in society compared to the more affluent, which might well be why the story still rings so true today. Although a lot has changed, much remains the same — hence the many, many adaptations of the story that still abound on screen, from the beloved whimsy of The Muppet Christmas Carol to FX’s recent retelling with dark, gritty flair. For those who love Christmas comedies, Scrooged with Bill Murray is another popular pick — and if you want to get really meta with it, 2017’s The Man Who Invented Christmas dramatizes Dickens’ very creation of the story.

There are even more adaptations on the way, including a Disney musical from Jacob Marley’s point of view, and an Apple musical adaptation called Spirited. The latter stars Will Ferrell and Ryan Reynolds, so you can expect to laugh and sing along while you watch. If you prefer a more classic version, though, you can turn to the film of the past — or just read Dickens’ original work.