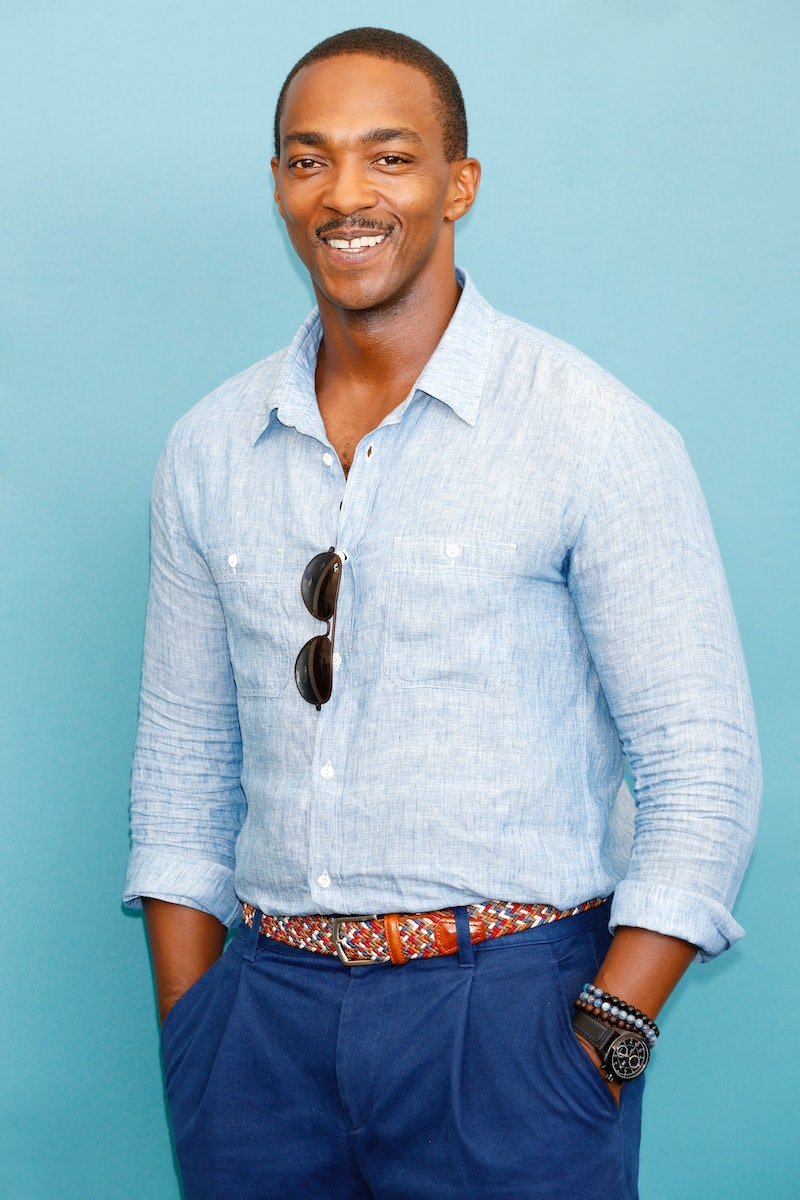 Interest in Anthony Mackie’s relationship history has increased tremendously since the premiere of Marvel’s The Falcon and the Winter Soldier on Disney+ in March, though the actor tends to keep the details of his private life under wraps. For his role as Sam Wilson on the series — the most-watched show across all streaming services in April, per data from TVision — Mackie won Best Hero and Best Duo (alongside Sebastian Stan) at the 2021 MTV Movie & TV Awards on Sunday, May 16. In honor of his wins, let’s learn even more about Mackie and dive into his romantic past.

Over his two-decade-long career acting in films like 8 Mile, The Hurt Locker, and Avengers: Endgame, Mackie has only been publicly tied to one partner, his ex-wife Sheletta Chapital. During an appearance on Queen Latifah’s short-lived talk show in 2014, the actor revealed that he met Chapital in second grade while growing up in New Orleans, Louisiana. “I was coming from a very bad school and going to a very good [one],” he told the host. “And when I walked into second grade, it was Dr. Seuss day. We had the little hot plate out, and the teacher was making green eggs and ham. So, you know, I walk in and I look and I see this girl with these little ratty pigtails and skinny legs and I was like, ‘Wow!’”

Noting that the two dated on-and-off from the age of seven, he joked that they had a classic bully-turned-crush scenario in school. “She used to beat me up for my lunch money in second grade,” he continued. “You know when you were a kid, you had 25 cents for lunch and I just ended up going to school and she’d punch me and I’d give her my 25 cents. By fifth grade, it was a dollar.”

While shooting the film Our Brand is Crisis alongside Sandra Bullock, Mackie and Chapital flew to the Dominican Republic and quietly got married in December 2014 at the Hard Rock Hotel and Casino in Punta Cana, per Page Six. “It was low-key and super-relaxed,” an unnamed attendee told the publication of the wedding, reportedly attended by about 150 close family members and friends. “They had a welcome dinner. We golfed and drank. They went on a honeymoon soon after.”

During their time together, the pair had four sons. Speaking to People in March 2021, Mackie said the kids are unimpressed by his high-profile Marvel roles. “They're pretty much really not into me as an actor at all,” he told the magazine. “It's shockingly funny how much they couldn't care less about me being in movies.”

Three years after their low-profile wedding, the pair split in a similar fashion. In 2017, Mackie and Chapital filed for divorce, as reported by TMZ following its finalization nearly two years later. According to several reports, the divorce was amicable, and they chose to share joint custody of their children. Since the split, Mackie has opted to keep details of his dating life out of the public eye. But who knows — maybe he’ll debut a new relationship on the red carpet of the next awards show.

More like this
Pamela Anderson’s Dating & Marriage History Could Be Its Own TV Series
By Jake Viswanath
New Details About Jeremy Renner's Snowplow Accident Reveal The Actor's Intentions
By Sam Ramsden
Here’s Everything Coming To & Leaving Netflix In February
By Jake Viswanath
'The Queen’s Gambit' Season 2 Tweet Wasn’t From Anya Taylor-Joy
By Mary Kate McGrath, Jack Irvin and Grace Wehniainen
Get Even More From Bustle — Sign Up For The Newsletter
From hair trends to relationship advice, our daily newsletter has everything you need to sound like a person who’s on TikTok, even if you aren’t.