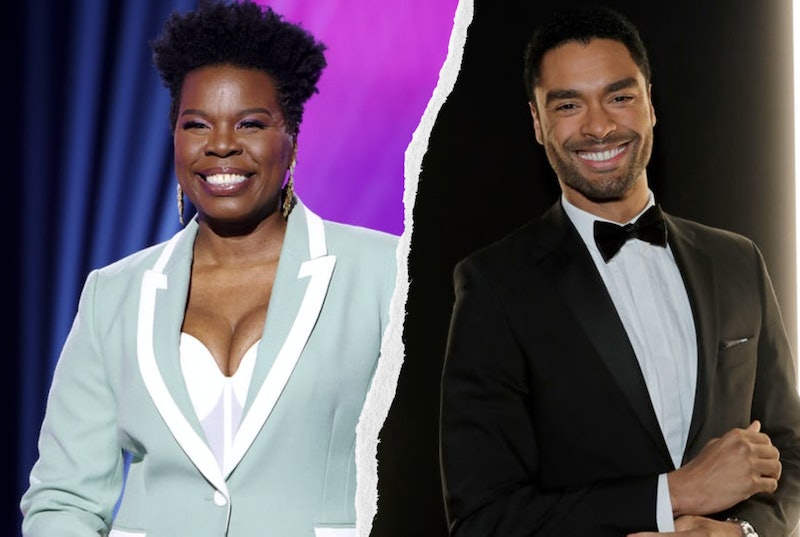 As the host of the 2021 MTV Movie & TV Awards on Sunday, Saturday Night Live alum Leslie Jones stole the show — and possibly even made you forget that this year’s iteration didn’t include any musical performances. Committed to making it as entertaining as possible, Jones got vaccinated specifically for the award show, which was probably a good idea considering she traveled from Westview, New Jersey, to Regency-era London during the broadcast... well, kind of. For a recurring joke throughout the show, Jones inserted herself into the fictional worlds of WandaVision and Bridgerton, reenacting a memorable steamy scene with Regé-Jean Page for the latter.

Donning period attire, from an elegant gown to a giant white wig, Jones took the place of actor Phoebe Dynevor as Page’s love interest in the hit Shondaland drama’s memorably sexy “I burn for you” scene from Season 1. “I am yours, Leslie,” says Page as he removes his clothing.

“Wait, wait, wait, wait, you're going too fast. We're not doing this justice. We need one of them long ass Zach Snyder cuts,” replies Jones, referencing the four-hour director’s cut of 2017’s Justice League released to extreme fanfare in March. Then, the sensual scene resumes — this time in slow motion, focusing on every detail of Page’s body and Jones’ reactions (including her quaking wig).

“I will spare you the rest, dear reader. It goes on like that for an agonizing four hours,” says a voice impersonating Lady Whistledown. (Unfortunately, MTV wasn’t able to secure Julie Andrews for this bit.) Ending the skit, Jones shoots back a snarky response: “Mind your own business Lady Whistledown, you gossipy b*tch.”

Acting alongside Jones wasn’t the only highlight of Page’s night. For his work on Bridgerton, the actor took home the award for Best Breakthrough Performance. Of course, the honor may be one of the final times he’s recognized as part of the show considering it was announced back in April that he won’t return for Season 2.

More like this
Everything You Need To Know About The 'Knives Out' Sequel
By Bustle Editors
A New 'And Just Like That' Table Read Pic Confirms A Key Character's Return
By Jack Irvin and Grace Wehniainen
'House Of The Dragon’s Theo Nate Is A “Massive” 'GoT' Fan
By Maxine Harrison
‘RHOSLC’ Star Jen Shah’s Arrest & Legal Drama, Explained
By Brad Witter and Jake Viswanath
Get Even More From Bustle — Sign Up For The Newsletter