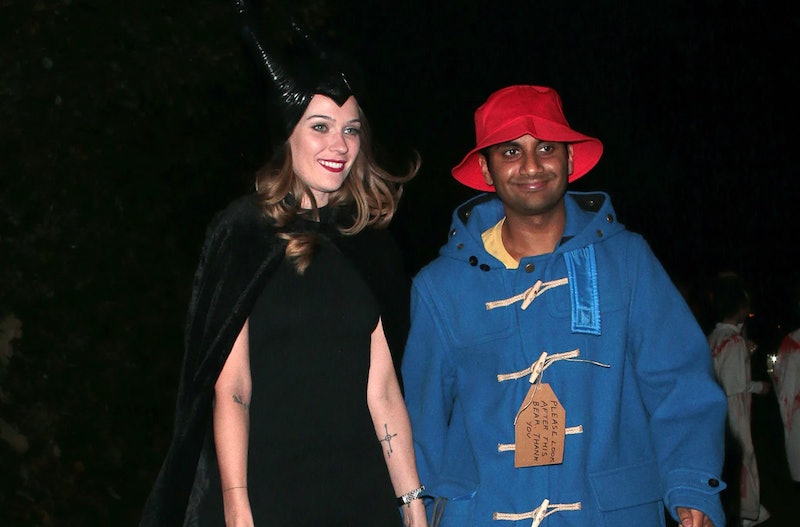 The countdown is almost over, folks. Four years after Season 2 of Master of None premiered on Netflix, a new season of the comedy-drama is set to hit the streaming platform on May 23. However, when the show returns, things might look a little different — especially for Aziz Ansari’s character Dev. “I’ve got to get married or have a kid or something,” Ansari told Vulture in 2017. “I don’t have anything else to say about being a young guy being single in New York eating food around town all the time.”

Perhaps Ansari doesn’t have much to say about the single life anymore because he himself is not single. The 38-year-old actor, who also co-created the series, has been dating forensic data scientist Dr. Serena Skov Campbell, Ph.D. since 2018. The pair kept things fairly private at first, only going public with their relationship the following year when Ansari shared photos of them at the U.S. Open on social media. It became even more clear how serious they were about each other when reports surfaced that Ansari took Campbell to India to meet his grandmother.

The comedian opened up about his relationship with Campbell in his Netflix special Right Now, which was released in July 2019. “I’m in a relationship right now, yeah, a very wonderful woman,” he said, adding that they have a “deep connection” that is “very hard to find.” In that same special, he got candid about the challenges of being in an interracial relationship and the sexual assault allegations he faced in January 2018, when an anonymous photographer called him out in a babe.net article for inappropriate behavior while on a date.

“There’s times I felt scared, there’s times I felt humiliated, there’s times I felt embarrassed, and ultimately I just felt terrible that this person felt this way,” Ansari said while addressing the accusations in his comedy special. “After a year or so, I just hope it was a step forward. It moved things forward for me, made me think about a lot. I hope I’ve become a better person — If this made not just me but other people be more thoughtful, then that’s a good thing, and that’s how I feel about it.”

If there’s one positive thing that came out of the allegations, it’s that Ansari’s entire perspective on life shifted. Per Page Six, an audience member at the comedian’s show said that the Funny People star “couldn’t believe that he was at Radio City — and said he really believed at one point that his career was over. He said his whole outlook on life had changed.” The news outlet also claimed that Ansari planned to marry Campbell, proving just how serious their relationship was after one year together. As far as we know, they have not yet tied the knot.

Interestingly, marriage and family will be central themes in Master of None’s third season. Per the official synopsis, “this new season is a modern love story that intimately illustrates the ups and downs of marriage, struggles with fertility, and personal growth both together and apart.” If the season’s trailer is to be trusted, the focus of the season will not be on Dev and Francesca’s relationship, but on Denise’s (Lena Waithe) romance with her partner Alicia.

While it remains unclear just how much screen time Ansari will get over the course of Season 3’s five episodes, fans are hoping that the show offers some insight into his offscreen relationship with Campbell. So far, the actor hasn’t confirmed that the season will reflect any real-life experiences, but he previously told the LA Times that his experience as an Indian-American actor inspired events on the show. There was even an emotional episode that explored his family’s immigration story.

From what we can tell from the official trailer, the third season is bound to be an emotional one, and whether we get a window into Ansari’s IRL relationship or not, we’ll be tuning in when the season premieres on Netflix on May 23.

More like this
Rhys Ifans Has A Good Reason For Keeping His Love Life On The DL
By Maxine Harrison
Who Is Nick Cannon Dating & How Many Kids Does He Have?
By Jordyn Tilchen and Radhika Menon
Don't Worry, Darling, Chris Pine Appears To Be Single Right Now
By Casey Cipriani and Jake Viswanath
Khloé Kardashian Is Reportedly Dating A Private Equity Investor She Met Through Kim
By Jordyn Tilchen and Jake Viswanath
Get Even More From Bustle — Sign Up For The Newsletter