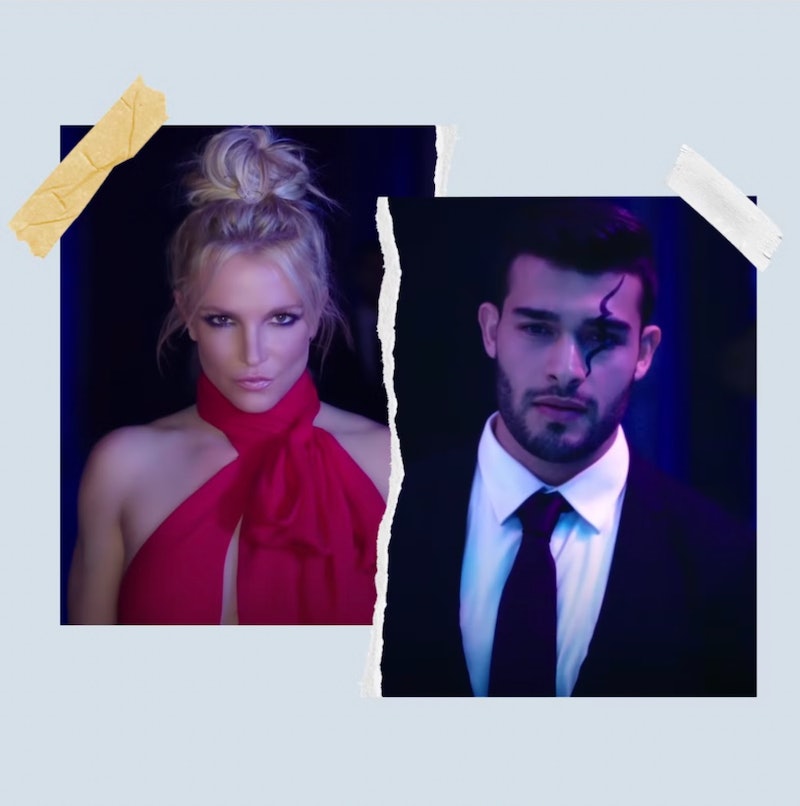 Britney Spears is having a baby one more time. On April 11, Spears indicated that she was pregnant with her third child in an Instagram post — but her fiancé Sam Asghari (who she refers to as her “husband”) thought it was a food baby at first. “I lost so much weight to go on my Maui trip only to gain it back,” she wrote. “I thought, ‘Geez… what happened to my stomach ???’ My husband said, ‘No you’re food pregnant silly!!!’ So I got a pregnancy test … and uhhhhh well … I am having a baby.” Asghari confirmed the pregnancy with his Instagram post hours later, writing, “Fatherhood is something i have always looked forward to and i don’t take lightly. It is the most important job i will ever do.” Bustle has reached out to representatives of Spears for more details.

This will mark the first child for Asghari, 28, and Spears’ third child, joining 16-year-old Sean Preston and 15-year-old Jayden James, her two children with ex-husband Kevin Federline. K-Fed, who had a two-year marriage with Spears, reacted to the pregnancy news via his attorney Mark Vincent Kaplan: “He wishes her the best for a happy, healthy pregnancy and congratulates her and Sam Asghari as they plan for the excitement of parenthood together,” Kaplan told NBC News.

READ NEXT: One Word To Describe Britney’s Net Worth: “Outrageous”

The 40-year-old singer seems ecstatic about the baby but not her growing stomach. “4 days later I got a little more food pregnant,” she said. “It’s growing !!! If 2 are in there … I might just lose it.”

Spears has been vocal about her desire to add another child to her family, especially after revealing in a June 2021 conservatorship hearing that she was forced to wear an IUD that prevented pregnancy. “I have an IUD inside of myself right now so I don’t get pregnant,” she said at the time. “I wanted to take the IUD out so I could start trying to have another baby. But this so-called team won’t let me go to the doctor to take it out because they don’t want me to have any more children.”

In November 2021, just days after she was freed from the 13-year conservatorship, Spears said she was “thinking of having another baby” on Instagram. Now that she’s expecting once again, the musician says she’s taking precautions to have a healthy pregnancy, which includes avoiding the paparazzi, and opened up about her past experiences with perinatal depression.

“It’s hard because when I was pregnant I had perinatal depression,” she wrote. “I have to say it is absolutely horrible … women didn’t talk about it back then … some people considered it dangerous if a woman complained like that with a baby inside her … but now women talk about it everyday … thank Jesus we don’t have to keep that pain a reserved proper secret … This time I will be doing yoga every day !!! Spreading lots of joy and love !!!”

In March, Spears opened up about her relationship with Sean and Jayden after celebrating their 15th and 16th birthdays, saying she refrains from sharing photos of them on social media. “I have to ask their permission to post them because they are extremely independent little men !!!” she wrote. “There’s a lot I can’t share with you all because my kids are very private which I love but I will tell you they are both extremely talented and I’m so incredibly blessed to have these two little men in my life !!! And if they’re reading this … which I’m pretty sure they’re not … I love you two little devils so much !!!”

More like this
Britney Has Been Granted A Restraining Order Against Her Ex-Husband
By Bustle Staff
Will Beyoncé Be At The BET Awards To Perform “Break My Soul” Or Attend The Show?
By Jake Viswanath
Justin & Hailey Bieber's Bond Is "Unbreakable" Amid His Ramsay Hunt Diagnosis
By Bustle Editors
What Is Ariana Grande's Net Worth? When It Comes To Money, She Has No “Problem”
By Hugh McIntyre
Get Even More From Bustle — Sign Up For The Newsletter

This article was originally published on April 11, 2022