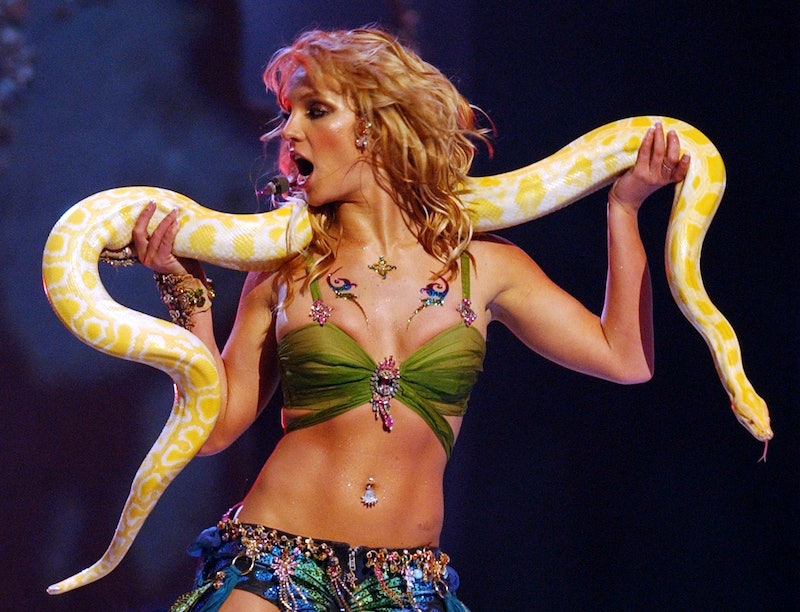 From Britney Spears’ industry-alerting debut in 1999 to her earning the Princess of Pop title in the 2000s to the years-long #FreeBritney movement, her fortunes have risen and fallen, with her net worth exploding and cratering depending on the year. Spears’ money trail is convoluted, taking into consideration a lot going with her estate, a semi-retirement, reported financial mismanagement, and the controversial legal arrangement she freed herself from in court.

Forbes once declared Spears the world’s most powerful celebrity, and in 2002 alone she brought in $40 million, so her current total net worth of $70 million (based on Celebrity Net Worth’s 2022 estimate) might not sound like it makes sense when put into the context of her historic career.

READ NEXT: Is Jamie Lynn Spears “Broke” Like She Claims She Is?

Throughout her legal battle to end her conservatorship and now after Spears announced on April 11 that she’s pregnant with her third child, fans are wondering how she made all her millions and what impact the conservatorship had on her bank account? Let’s dive in.

5 Ways Britney Spears Has Made Millions

Spears’ wealth started, of course, with the music. While she may not make the bulk of her riches from the pop songs she’s recorded, none of her other successful ventures would have happened without her mega hits and massive albums, all of which made her a household name.

RCA Records, her label (after her longtime company Jive became inactive), reports that she has sold nearly 100 million records throughout her career, with 70 million of those purchases happening in the U.S. alone. The singer has now dropped nine full-lengths, several popular compilations and scored at least 25 top 40 hits, including five Hot 100 No. 1 singles: “...Baby One More Time,” “Womanizer,” “3,” “Hold It Against Me,” and Rihanna’s “S&M (Remix)” featuring Spears.

Spears became a global sensation nearly overnight, and her first two albums remain among the bestselling in U.S. history, as both have been certified diamond for selling at least 10 million copies in America. The pair of releases — ...Baby One More Time and Oops!... I Did It Again — performed so well, Spears was reportedly paid a $10 million advance for her next project, Britney.

It’s not clear how the pop star is paid these days when it comes to royalties, as she’s not credited as a songwriter on most of her material, and that’s where the real money usually is when it comes to residuals. That means she may rely more on advances than on back-end payments.

Spears may not be performing these days (and she may never do so again), but she has made a significant amount of money appearing in front of large audiences on tour. The superstar proved she was a must-see in concert by making the most of every major televised performance possible, and she quickly became a staple of the MTV Video Music Awards. Year after year at the VMAs, Spears delivered the most-talked-about moment, from gyrating with a live snake in 2001 (above) to making out with Madonna during “Like A Virgin” in 2003, the pop titan demonstrated that she was not one to miss in concert, and all that publicity helped her make millions on tour.

In fact, returning to the stage is likely the reason Spears’ estate is in such solid financial shape, as that’s where most of the biggest names in music make their money these days. Back when she was touring all her albums, Spears had no issue selling out the biggest arenas all around the world. Her various treks across the globe have raked in at least half a billion dollars, though she hasn’t embarked on one since 2018.

Spears began making some serious cash when she headed to Las Vegas for her first concert residency, Britney: Piece of Me. The engagement ran for four years (2013 to 2017), and the singer headlined nearly 250 shows during that time, spacing them out to give herself time to rest and live her life. She was reportedly making an astounding $400,000 per night, and the entire run brought in well over $100 million in ticket sales. She wrapped the project with a final show that brought in more than $1 million at the box office, which at the time stood as the highest-ever reported sum for a single show at one theater in the city.

Shortly after Britney: Piece of Me ended, Spears announced she was heading back to Sin City for another concert residency, Britney: Domination, though she backed out shortly after revealing the plan due to her father’s health issues at the time. For that run, the superstar was slated to earn a hefty raise, as she was reportedly going to be paid half a million dollars per night.

“Britney Spears” isn’t just a name and a singer, it represents a brand. Sure, funds are earned from sales of CDs and T-shirts and the like, but the musician’s real moneymaker these days, especially as she’s currently sidelined from performing, is perfume. For more than 15 years now, Spears has lent her name to a line of fragrances, one which ranks as among the most successful fragrances of all time. Now incorporating upward of 30 different products, the brand has brought in more than $1.5 billion in revenue, and she takes home a healthy chunk of that change.

Spears jumped into the burgeoning celebrity fragrance business in 2004 with Curious, which quickly became a bestseller and kicked off a historic winning streak. That year, the little blue bottle was snapped up by a reported 700 million people globally, and that success apparently made Spears $52 million richer. At present, the Britney Spears line of fragrances could still be padding her bank account by as much as $50 million per year.

Throughout her decades as a household name, Spears has lent her name and face to a number of brands, including Apple Music, Candies, eos, Go Go Tea, Hasbro, Herbal Essences, McDonald’s, Suki Candy, Toyota, and Youtopia, among others.

Perhaps her most high-profile endorsement deal was with Pepsi, which she partnered with for several years. Throughout her time with the brand, Spears appeared in a number of commercials that became pop culture moments, with one standing out among the rest. She joined fellow pop icons Pink and Beyoncé in a gladiator-style spot, which many still remember to this day. For her allegiance to the soft drink company, Spears was reportedly paid $8 million.

Unlike many of her contemporaries, Spears didn’t venture too far into film and TV, largely remaining focused on the pop music she made so well. She did dabble, appearing on programs like The Simpsons, Will & Grace, Glee, How I Met Your Mother, and most recently, Jane The Virgin as well as films such as Austin Powers in Goldmember and the infamous Crossroads, though what she was paid for these acting gigs isn’t entirely clear.

Spears landed a serious payday when she signed on to be a judge on The X Factor in the United States. Producer Simon Cowell needed a heavyweight to pull in viewers and to get people to switch over from American Idol, and he found it in Spears. The “Toxic” singer was reportedly paid $15 million for just a single season.

Losing Money To The Conservatorship

The legal conservatorship that Spears lived under for more than 10 years both helped her re-establish her impressive net worth and also sapped untold millions from her. The entire thing was largely run by the singer’s father Jamie Spears, who claimed that when he took over, the superstar was only worth $3 million. She was allegedly in danger of going broke, but since then, her net worth has apparently expanded 20 times over.

Since 2008, the elder Spears has been paid at least $5 million from the singer’s total net worth for his role as former conservator of the estate. That sum included what is essentially a salary of $16,000 per month, which over 12 years adds up to $2.4 million, according to Forbes. She also paid for his office ($2,000 per month) as well as his massive legal fees. Additionally, The New York Times points out that Spears’ dad also earned a small percentage of her live fees, apparently lining his pockets with an additional $2.5 million as she toured the world and performed at her residency in Las Vegas.

Spears also paid for both her own lawyers as well as those representing the estate (her father’s counsel), even though they were in total opposition. Exactly how much she had to hand over for her own parent to battle her in court isn’t clear, but legal representation is costly. Between 2018 and 2019 alone, his law firm Freeman, Freeman and Smiley charged her $170,000. On top of that, she paid her own lawyer (now former lawyer) Samuel D. Ingham III more than $330,000 over several years. These sums are just a sampling of what she had to give away, and the total cost of fighting and defending the conservatorship may have run in the millions. In fact, The Daily Beast estimates that Ingham racked up more than $3 million in bills in the time he worked with the pop icon.

What Is Britney Spears’ Net Worth?

As of April 2022, Spears is worth $70 million, according to Celebrity Net Worth.

More like this
'Survivor' Host Jeff Probst's Salary Per Season After 22 Years Is The Real Winner
By Hugh McIntyre
What Is Miles Teller’s Net Worth? The 'SNL' Host's Bank Account Is No Joke
By Meg Walters
Where Is Former Bachelor Host Chris Harrison Now & What Is His Net Worth?
By Hugh McIntyre
Ed Sheeran’s Surprise Gig Included An Iconic Britney Spears Tribute
By Bustle Editors and Darshita Goyal
Get Even More From Bustle — Sign Up For The Newsletter

This article was originally published on Sep. 1, 2021