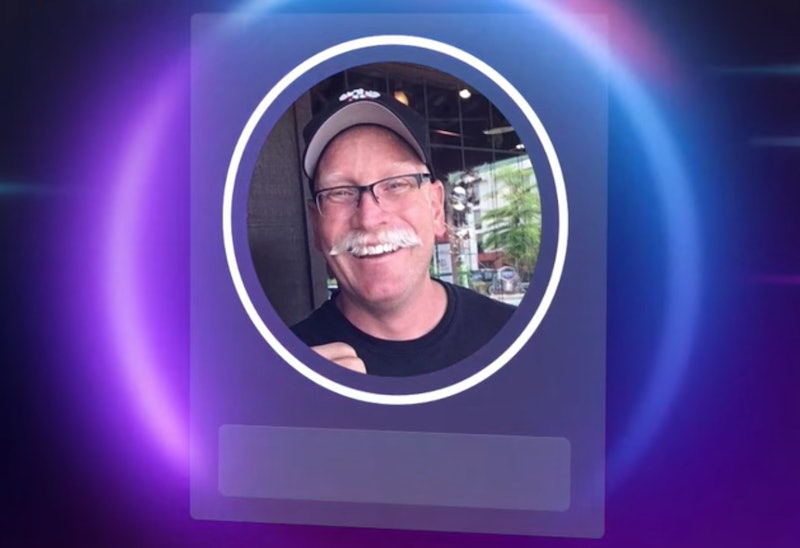 Competition is well underway on The Circle Season 2, and in Episode 8 not one but two catfishes were blocked: Emily, aka 20-year-old student Jack, and Lance, aka Lance Bass’ assistant, Lisa. While their fellow players rightfully guessed that something was off about them, the end of the episode also revealed that they’re getting another chance to catfish...again. Saved from elimination by The Circle platform, Jack and Lisa are now playing as an old man with a handlebar mustache.

“Who the f*ck is this dude?” Jack asked when his photo popped up, while Lisa kindly commented that he looked “really nice.” After laughing at their predicament, they decided to name their profile “John.” While John isn’t a real person on The Circle, he is largely modeled off of Jack’s grandfather, with details from Jack and Lisa’s own lives added in. “This guy gives me grandpa energy,” Jack said. “John is my real name. It’s my grandpa’s name.”

In real life, John’s photos belong to Dave Saunders, who you can follow on Instagram and TikTok at @santadept25. As he explains to Bustle, Saunders is a career firefighter in Lancaster, PA who also works as a professional Santa Claus for hire. He’s worked for The Strasburg Railroad Christmas Train, and is featured in a Hallmark Christmas movie set to release during the 2021 holiday season. “I’m hoping to do more commercials and movies, and I’m working really hard to achieve that goal,” he says.

Saunders adds that he’s not sure how Netflix found his profile, but he feels “extremely blessed to have been a part of the show.” Though the reveal of John is a big comedic twist on the show, Saunders says that everyone involved with The Circle was “extremely kind” and he’s even become friends with competitors like Lee, Lisa, Jack, and DeLeesa.

“The Circle was really a blast for me. It was fun having my friends texting me and calling me and seeing people I didn’t know trying to Google me and locate me,” he says. “I’d love to actually be on the show one day.”

On the show, Lisa and Jack ultimately decide that like Jack’s grandpa, John will be a seemingly innocent 64-year-old from Morgantown, West Virginia. Like Lisa, John loves to read, and like Jack, he also does improv. Jack also suggested making John a gay dad: “If we want to be like the most friendly old fella, maybe we go gay?” he says.

The result is that John is described as a sweet “full time psychic, part time Santa.” (The psychic job was decided for them by the platform, while his photo album is full of actual Santa cosplay.) “Loving partner of 38 years to my amazing husband Terry and father to three incredible children,” they write. “I love to cook, cozy up with a good book, and do improv!”

Lisa reasons that with Jack at 20 and herself at 42, they had a “good range” of experiences to pretend to be John. Though Jack jokes that he’s only lived “like a fifth of the life that this guy’s had,” they agree that they could at least channel their dads and dads they know.

“I think people are gonna like this guy,” Lisa says. Jack agrees, saying, “We gotta have big dad energy — BDE.”

Hilariously, the newly introduced “gay psychic Santa Claus” doesn’t raise many alarm bells with the other players. Chloe loves that he’s a psychic, while Trevor (aka Deleesa) and River (aka Lee) are immediately won over by John’s fabricated family life. His seemingly genuine and quirky nature manages to even save him from the final elimination, where River deems Mitchell more of a threat to his gameplay than the completely fake John.

It’s unclear if River’s gamble to keep John around will pay off in the end. The finale doesn’t air until May 5, but at this point Season 2 is shaping up to be very different than the first season. Most of the players heading into the finale are catfishes, and we’ll just have to wait and see if any of them avoid the net and win the $100,000.

More like this
Love Is Blind’s Natalie Claims Shayne Signed Up For 'Perfect Match' While They Were “Still Together”
By Brad Witter
'Love Is Blind: After The Altar' Season 3 Has A Release Date & It's Very Soon
By Grace Wehniainen
'Bling Empire: New York' Star Nam Laks Is The “Blair Waldorf Of Thailand”
By Alyssa Lapid
The Mysterious Gunther Corporation From 'Gunther’s Millions' Has Dissolved
By Brad Witter
Get Even More From Bustle — Sign Up For The Newsletter
From hair trends to relationship advice, our daily newsletter has everything you need to sound like a person who’s on TikTok, even if you aren’t.