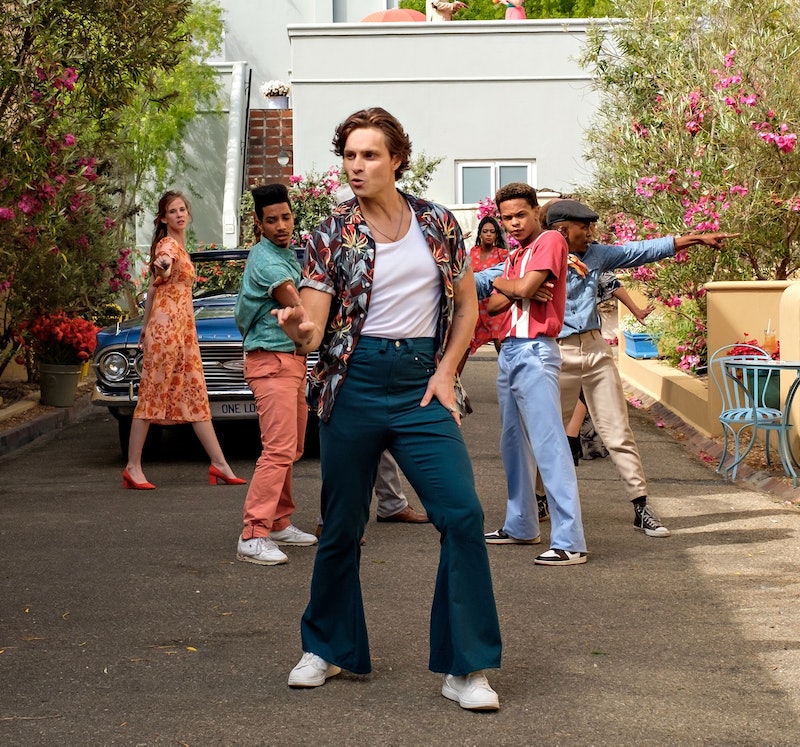 Victoria Justice stars in Netflix’s Afterlife of the Party as Cassie, a fun-loving partygoer whose 25th birthday extravaganza ends in her unexpected death. But before her guardian angel decides the fate of her afterlife, Cassie is tasked with revisiting her best friend Lisa (Midori Francis), father Howie (Adam Garcia), and estranged mother Sofia (Gloria Garcia) in hopes of repairing their strained relationships and scoring herself a coveted spot in the big VIP room in the sky. Throughout the film, Cassie and Lisa bond over their shared love of a pop star named Koop, and they even visit the set of one of his music videos. Considering he served Harry Styles-esque fashion and performed radio-ready songs including “Blush” and “One Look,” we can’t help but wonder, is Koop from Afterlife of the Party a real pop star?

While Koop isn’t an actual musician, the actor who portrayed him is, and his name is Spencer Sutherland. Born in Pickerington, Ohio on Aug. 31, 1992, the singer launched his music career in 2013 with the release of his debut single “Heartstrings.” Then, Sutherland was picked as radio host Elvis Duran’s Artist of the Month in June 2017 and subsequently delivered his debut television performance of his single “Selfish” on NBC’s Today show. Later that year, he appeared as a contestant on the UK version of The X Factor and made it through to the series’ Live Shows. However, Sutherland was eliminated after his first performance, a cover of Jessie J’s “Who You Are.”

Sutherland is currently on a North American arena tour with the Jonas Brothers and Kelsea Ballerini, and he released his debut EP, NONE of this is about you, in 2019 — all of which has helped him rack up over 200k monthly listeners on Spotify. He wrote all four of Koop’s songs featured in Afterlife of the Party, including the aforementioned tracks, “Drive,” and “Home,” a duet with Justice. In an interview with That Hashtag Show, Sutherland revealed that when he was initially asked to play Koop, there were no official plans for him to write songs for the fictional singer. But Netflix gave him the opportunity, and he took it, though he says writing mainstream pop songs was a challenge.

“With my music, I put a lot of truth and raw things about my life in it. With these, the goal was to have feel-good pop, so it was interesting to try to think less while I was writing. If something feels too generic, sometimes it’s not. Some of the best songs are like that,” he said. “It was interesting taking a step back and writing more simplistic, but just feel-good music. It was really a breath of fresh air. It even taught me about writing for [myself]. Hey, sometimes simple works.”

Speaking to Bustle about the film on Aug. 4, Justice detailed her experience co-writing “Home” with Sutherland, noting that their goal was “to write a song that was not a love song, but a life song, and life songs are a little bit harder to write because it can just get cheesy easily, you know?” She continued, “But I feel like we really did strike that balance.”

Afterlife of the Party is Sutherland’s film debut, and expressed his excitement towards its release several times on Twitter since it dropped on Sept 2. “Hey guys hi, have you watched my movie? It’s ok if you haven’t; but also not ok because why haven’t you,” he tweeted on Sept. 3. Two days later, alongside a screenshot of the film’s opening credits that reads, “Introducing Spencer Sutherland,” he posted, “Who’s choppin onions in here.” Speaking to That Hashtag Show about the possibility of a follow-up film, Sutherland exclaimed, “I’m open to as many sequels as possible.”

More like this
Here’s Everything Coming To & Leaving Netflix In October
By Jake Viswanath
What’s New On Netflix: Ana De Armas’ 'Blonde' & A Nick Kroll Special
By Arya Roshanian
What’s New On Netflix: Meet 'The Real Bling Ring'
By Arya Roshanian
Snoop Dogg & Michelle Pfeiffer Lead Moving Tributes To Coolio
By El Hunt
Get Even More From Bustle — Sign Up For The Newsletter