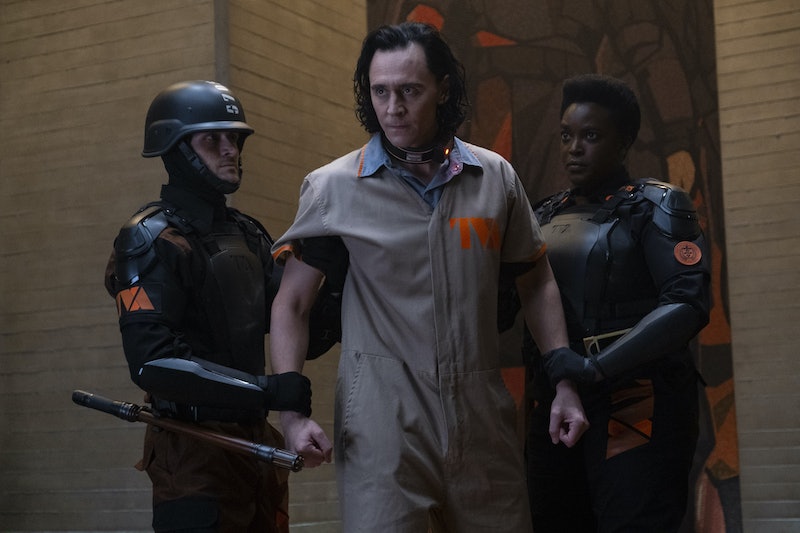 In the first episode of Disney+’s new Marvel series Loki, a question is posed to the titular God of Mischief: “Do you enjoy hurting people?” It’s an important question, as the show picks up with an earlier version of the character: 2012 Loki, who’s fresh off his first attempt at world domination. Though fans watched Loki experience the death of his mother, the destruction of his homeworld, and an eventual turn to heroism in the Marvel films, that version of him was killed in Avengers: Endgame. Loki seeks to explore who the character is at his core — and whether he would have ever changed without those tragedies to shape him.

Because Loki has already starred in six Marvel films, Loki head writer Michael Waldron knew they’d need to approach the character from a new angle. In the films, Loki “had, in essence, arced out,” Waldron tells Bustle. “He had a fulfilling arc and then met his end facing off against Thanos. So that story already exists, and fans went on that ride.”

The opportunity to redefine Loki came from a brief but crucial scene in Endgame. During the Avengers’ time travel attempt to retrieve several Infinity Stones from the Battle of New York, things went awry and Loki got hold of the Tesseract — which he then, of course, used to zap away and escape imprisonment. This gave Loki’s writers a space to “work with a slightly more raw” and arrogant version of the character, Waldron says.

What Loki thought was a clever escape created an alternate timeline. In Loki, this puts him in the crosshairs of the Time Variance Authority (TVA), an organization in charge of maintaining what they call the “Sacred Timeline” — essentially the one and only timeline that’s allowed to exist. While this version of Loki considers himself a god amongst men, to the TVA he’s just another time-hopping criminal, and it doesn’t take long for them to capture him.

This humbles Loki, who’s stripped — literally and figuratively — of everything that made him feel powerful. He’s cut off from his magic, forced into a jumpsuit, and shuffled through an excruciatingly arcane and impersonal DMV-esque system. He’s also sentenced to be “reset,” but Mobius (Owen Wilson) — a TVA agent who sees Loki’s potential amid his many flaws — steps in. It’s Mobius who asks Loki why he hurts people, all while forcing him to rewatch scenes from the films and questioning his motives. “I know what I am,” Loki snaps, to which Mobius responds, “A murderer?”

After Loki’s attempt to escape the TVA is thwarted, he’s confronted with scenes of his parents’ — and his own — death. It’s then that he finally admits the truth. His violent actions are just a ruse to hide the fact that he, in actuality, knows he’s powerless. “I don’t enjoy hurting people,” he admits. “I do it because I’ve had to. Because it’s part of the illusion. It’s a cruel, elaborate trick conjured by the weak to inspire fear.”

Waldron says that forcing Loki to contemplate his past actions was integral to deconstructing the character. It’s also a tidy way for the MCU to distance themselves from Joss Whedon’s characterization of Loki in Avengers. Whedon’s Loki was a violent dictator — even compared at one point to Hitler — which, as Mobius himself points out, doesn’t really gel with Loki’s nature as a prankster. “Look at that smile. You are enjoying that,” Mobius says as he replays a video of Loki removing a man’s eye in Avengers. “[You’re a] god of mischief, right? I don’t see anything mischievous about this.”

As Loki rethinks who he’s meant to be, so too does the audience. “Loki is constantly in this series being forced to self-reflect in a way that he's never done before. That's a very intimate thing,” Waldron says. There are moments when Loki seems to deflect from questions about his personal failings by elaborating on his godhood or questioning the inner workings of the TVA, but even that’s a window into his vulnerabilities. “Loki would frankly rather consider the grander questions of gods, existence, and all that. In some cases that's more comfortable than looking inward to yourself and just trying to figure out: who am I?”